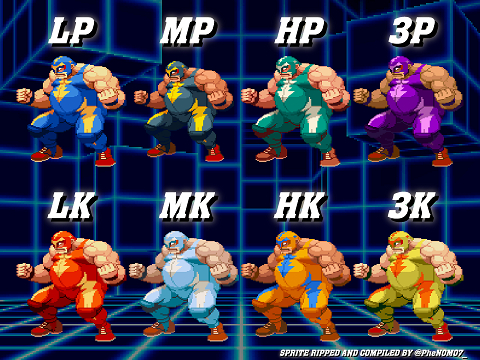 Punch Throw (f+hp) - Raiden has the best punch throw in the game. With a range of 85 pixels, he can usually grab characters outside of their jab range meaning some characters will have an extremely difficult time teching or countering Raiden's throw attempts. Raiden's punch throw being so far ranged is extremely versatile in K as many normals when JD'd can now be thrown due to the 85 pixels.

Giant Bomb (charge b, f+p) - Raiden takes a sprinter's stance and charges forward with a shoulder ram. Very interesting special due to its heavy invulnerability window. 21/31/39 frames of invulnerability with 26/34/42 startup frames and -14/-16/-18 on block depending on power of punch used. This special much like Joe's Slash Kick, Cammy's Spiral Arrow or Rock's Hard Edge can be distanced correctly so that it becomes difficult or impossible to punish for certain characters on block. RC Giant bomb is nearly useless as the invulnerability window of the RC will be completely overshadowed by the moves normal invulnerability.

Poison Breath (hcb+p) - Raiden spits out green poison that awards a knockdown on connect. 17/21/24 frames of startup and +9 at all levels on block. Huge recovery on whiff (101 on HP version!). Useful as early AA and for corner tricks.

Drop Kick (hold 2x kicks and release) - Raiden's overhead where he jumps up into the air and sticks his legs out in front of him. In general, not too great due to heavy recovery (-35 and up). It's worth noting that RC Drop Kick however is his AA of choice as the hit-box is large. RC drop kick should always be done by holding down MK and HK with middle and ring finger. Upon tapping the roll inputs, lifting up the middle and index finger will execute the RC drop kick.

Jumping Lariat Drop (dp+p) - Raiden does a flying lariat off a jump that travels a distance dependent on the punch used. Good for surprise tactics and mix-up but plagued with TERRIBLE recovery on block.

Combination Body Blow (rdp+p) - Raiden rushes forward and strikes his opponent with a punch to the stomach. Comes out in 13/14/15 frames depending on punch used and leaves Raiden at (-13/-14/-15) on block and hit. Can be followed up with two possible specials

Headbutt (qcb+p AFTER Combination Body Blow) - Raiden headbutts his opponent, launching them into the air, and also into a juggleable state meaning Raiden can connect a level three fire spit super after it. Leaves Raiden at -7 on block so Combination Body Blow should always be followed up as the recovery is better.

Front Suplex (qcb+k AFTER Combination Body Blow) - Raiden moves forward and attempts to grab his opponent, landing a suplex on connect. Not horribly useful for anything other than following up a blocked Commbination Body Blow. Because it is a grab, it's unblockable but can be easily reacted to with a quick normal, special or even super. It's useful to know that if an opponent is thinking you will be following up with a headbutt, often times a Front Suplex will catch them off guard.

Thunder Crush Bomb (360+p) - Raiden's command grab with a range of 85 frames on the jab version. Comes out in 3 frames meaning it has the same speed as his punch throw, but cannot be teched. Useful for when you feel your opponent is going to tech your throw attempts such as after JD's, empty jumps, or low jump shorts. Can be RC'd much like Honda's Ooichou Nage command grab for corner and wake-up mix-ups.

Destruction Drop (720+k) - Raiden's command super throw. The farthest reaching throw in the game at level 3 with a range of 118 pixels! Immense damage of 6400 at level 3, it is inescapable if the opponent has not jumped once super flash has occurred (same as E.Honda and Zangief's super throws).

Crazy Train (qcfx2+p) - Raiden rushes forward with a flurry of punches and finishes the sequence with a giant bomb. Does 6600 damage at level 3 meaning it is extremely powerful. Can be combo'd into off of close strong, jabx3 and close fierce. 4 frame startup at all levels means decent for use on wake-up.

Flame Breath (hcbx2+p) - Raiden spits out a stream of fire with a massive hit-box. Can be crouched by a few of the very short cast. Does 5000 damage at level 3 and can be super cancelled in C-Groove. By itself, the super is only useful as a very early AA due to its 13 frame startup but when used after a corner connected giant bomb or connected combination body blow to headbut, its effects are devastating as it hits juggled opponents for FULL damage, not partial like Kyo's Serpent Wave super or Chun Li's Chi Palm super.

Raiden's strongest groove is without a doubt, K, due to his lack of a solid AA. Crouching fierce is a decent AA but has heavy startup as does RC drop kick. Also, Raiden can use meter extremely effectively due to his deadly mix-up meaning having a steady supply of level 3's makes him dangerous. Raged Raiden also has nasty guard break potential as combination body blow and poison spit do very respectable guard damage.

In the air, Raiden is very slow so low jumps greatly improve his game as his d+hp and low lump short are extremely high in priority. Also, low jumps help him land his command throws making him much more threatening.