Haohmaru is a Ronin from Japan. He's a confident and highly skilled swordsman, and devoutly follows the path of the blade. It's assumed that he's always been like this, as one of the only things known about his early life is his challenge to the incredibly skilled Ronin Jubei Yagyu. Haohmaru lost of course, but Jubei sent him to train under Nicotine Caffeine, another powerful master. There, Haohmaru befriends Genjuro Kibagami, another orphan with a tragic and bloody past. Haohmaru and Genjuro train under Nicotine Caffeine for many years, and become very close friends and training partners. However, Genjuro is a power-hungry man, and Nicotine can see this. To put his students into one final test, Nicotine gives them a challenge to fight against a large group. The reward for whoever won was the legendary and powerful sword Fugudoku. Genjuro shows his true self, and brutally murders each of his opponents, calling them weak. Haohmaru simply fights until they all give up, ending no lives. Haohmaru wins clearly, and Genjuro leaves in a raging fuss, swearing to one day kill both Haohmaru and Nicotine.

Haohmaru is a simple and straightforward character. In essence, he's just a guy with a sword. He has great normals for poking, solid pressure overall, and a useful fireball that knocks down at all ranges. He can even feint this fireball, a skill unique to him, which allows him to bait opponents jumping or mix how he does blockstrings. While he lacks mixups, he actually does fairly good when it comes to crushing guard bars thanks to his amazing LP normals and fireball feint mixups. While his 623P Kozetsuzan DP series aren't invincible, they still make solid anti-airs and combo enders.

What Haohmaru lacks is consistent defense and consistent damage output. His straightforward gameplan that revolves around simple neutral and fireball mindgames is about all he really has. His DP isn't invincible, he has decent but low reward buttons for mashing, and he has surprisingly low health overall, ranking in the same health tier as Dhalsim and Iori. His damage isn't the best either, as his only meterless combo ender is Kozetsuzan which likes to whiff at long range. He only has two supers as well, with one being a mediocre and level 3 only super, leaving him with a single way to viably spend meter. This too has a range issue, though not as bad, leaving Haohmaru struggling to get high damage from his pokes. If Haohmaru can garner respect from his opponent through solid neutral and smart usage of his fireball and feint, he can be very strong. He just has to get them to respect him first, and has no standout unbelievably strong tool to do so.

Best - K/N/A: K-Groove is usually the most popular Groove for Haohmaru, and for good reason. JD lets him play a lot more offensively, and Rage ups the damage on his pokes by a huge margin. His level 3 Fujinzan super does notably good damage, which is a great buff for him in general. Hop and run let him play a lot more effective on the offensive as well. N-Haohmaru gets the more effective offense plus a roll on top of it, in exchange for no high damage peaks. Confirms into level 1 Fujinzan just aren't too damaging overall. Max Mode is an expensive but usually worthwhile buff however, as he gains a damage buff and a chance to do level 3 Fujinzan. A-Haohmaru is a popular beginner A-Groove pick, since his natural gameplan is very simple and rewarding in A-Groove. Alpha Counters give him a solid defensive tool, but the real juice is his simple and useful Custom Combo. Putting A-Haohmaru on the point of your A-Groove team isn't a bad idea if you don't want a difficult character on your point slot.

Useful - C: C-Haohmaru plays somewhat weaker than the other viable Grooves. While Haohmaru does have some fun level 2 cancels, they aren't very easy, and simply cancelling into his level 3 would do more damage overall making them less useful. Still, the ability to choose how much meter you spend is useful. C-Haohmaru can be seen as a more stable but less rewarding Groove overall.

Worst - P/S: P-Haohmaru lacks the scary meterless damage to make P-Groove good. A close range parry might get you a cl.HK > 623MP combo, but anything further out and your best punish tends to be just poking them. You'll rarely have a level 3, and even when you do, you likely won't get a chance to punish with it. S-Haohmaru is also fairly weak. Charging can put him in a bad spot, as good players will be looking for Haohmaru to whiff something big or throw a fireball, so leaving yourself open to a poke into super for big damage isn't worth the risk. His level 1 Fujinzan is underwhelming and only really useful for combos as well. S-Haohmaru gets very little overall. 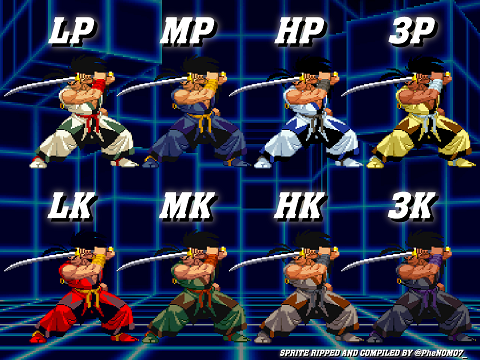