E. Honda, full name Edmond Honda, is a dedicated sumo wrestler from Japan. From a young age, Honda trained hard to become a sumo wrestler. He would eventually become incredibly well respected, reaching the high rank of Ozeki, the second highest rank. It's stated that he's skilled enough to be considered a Yokozuna, the highest rank possible, but his strange and outlandish techniques hold him back from qualifying. He began his journey in Street Fighter II: World Warrior, where he traveled the world spreading the art of sumo wrestling. He felt the rest of the world didn't appreciate it, and he would show them what it truly meant. Honda helps with destroying Shadaloo, mostly because of other sumo wrestlers getting biochemical drugs from Shadaloo's dealers. Together with the others, he assists in defeating M. Bison and destroying the Shadaloo base.

E. Honda is the epitome of a turtle character. He has the most immaculate defense, with a stellar anti-air and punish tool in his Headbutts, lots of great normals to stuff the opponent walking forward, and powerful roll cancels to reversal through gaps with. His high health lets him tank plenty of hits and keep going, and his command grab lets him punish opponents with a fast and damaging move. His Hand specials are annoying and powerful neutral tools that make Honda soar forward. They're very safe on block, hard to contest, and if roll cancelled, invincible. His Butt Slam specials are invincible rising specials that are great for punishing errant fireballs or movement, and can set up annoying ambiguous crossups on the opponents wakeup.

Honda doesn't come without weaknesses however. His slow movement makes it hard for him to approach vs characters that zone him out. While roll cancels aid in his normal weakness against projectiles, they aren't a guaranteed answer at all ranges. Being a charge character as well, approaching means sacrificing access to his Headbutts, which weakens his anti-air game significantly. Honda also lacks strong meterless damage, relying on supers to get meaningful damage overall. Honda is great if you want to sit back and annoy opponents into approaching you with his Hands, and then beat any approach option they pick.

Best - C: C-Honda is a step above all the other Grooves. This gives him everything he needs, from rolls to solid damage output with meter. Honda almost always needs rolls, as they make many of his specials a lot scarier. His level 2 combo is also fairly damaging, allowing him to punish things more meaningfully. Airblock lets him approach from the air more safely, and Alpha Counters give him another powerful defensive tool to add to his arsenal. C-Honda is a great C-Groove pick, he fits the mechanics quite nicely.

Useful - A/N: Both of these Grooves are notably worse than C-Groove for Honda. A-Honda has a majority of the same things C-Honda does, but sacrifices airblock and level 2 supers for Custom Combos. While his CC isn't the worst, it's also not the best, and it is fairly difficult to perform. It does more than decent damage however, but you may find C-Grooves level 2 combos to be more frequent and give him better overall punishes rather than the rare high damage punish. N-Honda gets access to hop and run, which make him a bit more offensive, though he still has very little offensive pressure overall to work with. Namely, he can end a lot more combos in super, which is fairly worthwhile. He still gets access to rolls for RC specials as well.

Worst - S/K/P: These Grooves all have one thing in common: no rolls. Lack of roll means Honda can't do RC Hands, Headbutt, or Command Grab, all of which are powerful reversal and neutral options for him. S-Honda has very little access to meter, and while he doesn't mind charging, he would rather build meter normally through whiffing buttons or Hands pressure. Infinite level 1's doesn't aid him much either. K-Honda is a worse N-Honda. K-Groove is widely known to be offense oriented, and Honda just doesn't do well enough offensively to warrant that. A Raged punish into a level 3 super is scary, and K-Honda does get the benefit of a command grab super threat, but it isn't enough to justify the loss of rolls. P-Honda is essentially useless, as you have to give up charge to parry, which immediately makes you unable to punish whatever you parried in any meaningful way.

!!!THIS PAGE IS STILL A WIP. IF YOU NEED FRAME DATA NOW, REFER TO THE CVS2 BIBLE OR LOOK THROUGH EDIT HISTORY TO FIND AN EDIT CONTAINING FRAME DATA IF THERE WAS ONE!!! 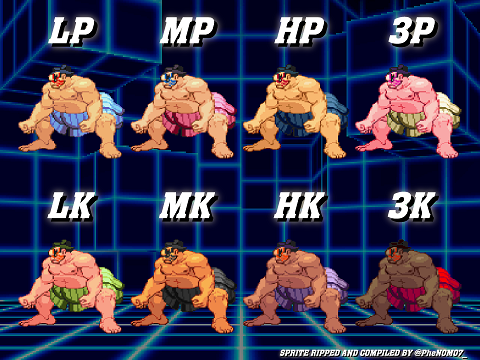