Zangief, nicknamed The Red Cyclone, is a massive man and a Russian hero. In the days of Street Fighter: Alpha, Zangief was the hero of the Soviet Union. The President of Russia and leader of the Soviet Union offered him full financial support to travel the world, beating opponents and boasting of Soviet might. Zangief does this flawlessly, getting into fights with legends like Ken and winning. Once his mission is over, The President sends him to fight Shadaloo forces, who are slowly making their way into Russia. Along the way, Zangief finds two new friends in E. Honda and R. Mika. While it is unknown if they destroyed the Psycho Power Driver or not, Zangief still fights for his Soviet Russian pride to this day.

Zangief is the classic grappler. The character that the whole archetype is modeled after. Big body, huge damage, slow movement, and big buttons make Zangief what he is. While CvS2 is home to a few grapplers, Zangief stays the most true to the archetype. He hits hard with big normals and fast grabs, and can get hit plenty of times before it starts to hurt. Opponents have to be scared of a good Zangief, as he has amazing ability to punish just about anything, and he can control neutral shockingly well with big buttons and Lariats.

Zangief hurts in a lot of places however. Likely the biggest one is his lacking mobility. While SNK Grooves give him runs and hops to aid this, he has a very slow run still, and he doesn't get to lose his slow walkspeed. His lack of movement hurts a lot, as his best mixups and damage potential only exist when he's very close. To hurt this more, his main command grab sends them flying away, basically resetting to neutral. So the move you want to land most requires you to struggle with Zangief's biggest problem, and when you do land it, it resets you into that same situation.

In all, Zangief is on the lower half of the mid tier characters. While he has great damage and great ability to punish, he has to constantly fight against the top tier CvS2 characters, who are all beastly in neutral. Zangief has to outplay opponents at a lot of turns, but if he does, he is a monster.

Best - K: Zangief's best Groove is definitely K-Groove. It gives you everything you need for a successful grappler playstyle in this game: a good defensive option in JD which often leads into a sweep or even SPD, Rage which juices his already high damage to new levels, and the threat of a level 3 360 in Rage. Zangief's high health also allows him to take a lot more hits and have Rage even more often than other K-Groove characters. K-Zangief pokes add up, SPDs do great damage even if they do reset to neutral, and his strike/throw mix becomes very threatening.

Useful - A/N/P: A-Groove and N-Groove are a little behind K-Groove. A-Zangief gives up any mobility buffs, and has a pretty bad dash. In exchange, he gets access to a solid Custom Combo in the corner, and the powerful mechanic of activation makes his throws stronger by mere threat alone. He also has rolls and Alpha Counters to aid his weaker neutral and defense. N-Groove is the opposite. N-Zangief has a great mix of tools for many situations, having the higher mobility of K-Groove and the rolls of A-Groove. He also gets access to roll, which once again gets him out of some tight spots. He sacrifices this by not having the threat of a level 3 720 without a Max Mode activation, and less overall meter altogether. P-Zangief is a very difficult P-Groove character, but parries can be very rewarding for Zangief who can usually get a sweep or SPD, similar to JD. He also can get parries into 720, which is hard to do, especially since P-Groove rarely has meter. It is very rewarding however. P-Zangief lives and dies by how well you parry, just like most P-Groove characters.

Worst - C/S: C-Zangief sacrifices a lot in comparison, and gets very little in return. Since both of his supers are grabs, he can't really do any level 2 combos, making the main attraction of C-Groove worthless for him. The main attraction of C-Zangief is air blocking and more consistent meter, he makes an alright point. S-Zangief is hard to consider worthwhile, since even though his health does let him have infinite level 1's more safely than other characters, this really doesn't benefit him much. Having to charge for meter really hurts Zangief as well, in general S-Zangief has very little in the way of strengths.

Zangief has no close normal versions, so there are only far, crouching, and jumping listed. 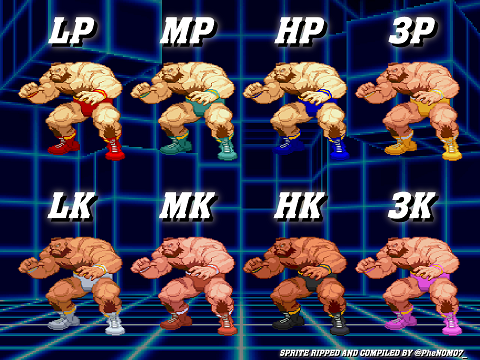