Yun Lee is one of the two famous Lee Twins, born in Hong Kong, China, with his twin brother Yang not making an appearance in CvS2 outside of two of Yun's supers. The Lee twins were orphaned at birth, as their father was a criminal underworld boss. Their parents mysteriously disappeared because of some trouble within the crime world, and Yun and Yang were raised instead by their grandfather, Lee. They were named by eight of the criminal worlds most powerful bosses, who supported the twins as godparents. Under their grandfather Lee, who was known as a powerful Kung-Fu martial artist, both of the brothers learned Chinese Kung-Fu. They took to it quickly, and became known in their town for their abilities. Yun gained the nickname The White Dragon, with Yang being The Blue Dragon.

The brothers are hot-blooded at times, especially Yun, but care deeply for their hometown of Hong Kong. They run a restaurant called Shinryuken, and are often seen around town beating up criminals and trying to maintain the peace. They often get into trouble because of Yun's desire for adventure, with Yang being dragged along. In the events of Street Fighter IV, Yun decided to follow Chun-Li, who came out of retirment to fight Shadaloo once again. Yang got dragged along, and once they returned home significantly beaten up, their best friends Hoimei and Shaomei gave them quite the stern talking-to.

Yun is a rushdown and mixup oriented character, with high combo potential in the right situations. Yun is usually ranked in the low to low-mid tiers, which may come as a surprise to those who played Street Fighter III: 3rd Strike or Street Fighter IV, where Yun usually ranks very high. Sadly, Yun's neutral potential isn't strong enough to compete with the neutral monsters present in CvS2. His pokes with good reward have low range, and his pokes with good range have low reward. Because of this, Yun has to navigate a minefield of Sagat 2HP, Cammy 5HP, Sakura 5HK, and more. His divekicks are normally good at this, but with how many potent anti-airs are in this game, it's much harder to utilize them now. While his mixup and combo potential are still intact, his overall damage is much lower than usual without the right meter, and you have to find your way through being zoned out to land them.

Yun's defense isn't too stellar either. Without roll cancelling, Yun possesses no true reversal special, and RC gives him only unsafe ones. Yun also has one of the lowest health values in the game, meaning it takes only a few good hits to kill him. Mixing this with his already weak overall neutral presence, and it means that Yun will constantly be losing neutral, and doesn't have the health to keep running back in and attempting to approach. However, given he does get in, he can make a round end quick. It's just that his close range strength is all he has, and even that gets outclassed.

Best - C: Yun sadly has no real Groove that satisfies all of what he needs in one go, but C-Groove is close enough. C-Yun is widely considered the best Groove, as Yun has high damage level 2 combos that help buff his damage to what it needs to be. Alpha Counter gives him a real defensive reversal option, and airblock lets him approach from the air safer, which makes divekicks a scarier option. He doesn't have the run and hop mobility to make approach and mixup scarier however, which leaves him without access to two of the best tools for approaching.

Useful - A/P/N: A-Yun would sound like his best Groove on paper, as Custom Combo works very similar to Genei-Jin, Yun's infamous super in 3S and IV. However, Yun sadly doesn't use CC as well as other characters, and since the other subsystems of A are the same as C without airblock, A-Yun plays like a lesser C-Yun with flashier combos. A-Yun's CC does roughly 5k damage, which is definitely on the lower end, and it's mostly because he has no super to end them with. None of his supers juggle very well, leaving him ending his CC's in a simple j.HK for max damage. P-Yun can actually punish after a parry fairly consistently, and it leads into his good mixup game. With hop, he has a realistic overhead threat, and while he doesn't have run, being able to parry allows him to approach a bit more safely anyway. He rarely has super however, and while a good parry into a level 3 Youhou combo is great, he won't usually be able to do this. P-Yun also sacrifices rolls, and while parry can almost barely make up for the lack of RC specials, he has no reversal almost ever. N-Yun gets rolls, hop, and run, making it a pretty sweet deal for a consistent rushdown Yun. Sadly, he sacrifices big damage potential, as his level 1 supers are very underwhelming. N-Yun is a fundamentalist rushdown without great neutral or defense, and if you want to play him in an SNK Groove, is your best shot.

Worst - K/S: K-Yun makes an immediate sacrifice in the form of roll. Just Defend is a useful defensive mechanic, but not as useful as an Alpha Counter, airblock, or Custom Combo is. He has great mobility, and when Raged his damage is actually very notable. Rage gives him a level 3 Youhou for big damage as well. K-Yun gets one chance to win neutral with Rage and do something damaging, but often that one chance is all he gets. S-Yun is horrid, charging leaves Yun wide open for a huge and damaging punish and infinite level 1 supers gives him basically nothing. If you want run and hop, play N-Groove. 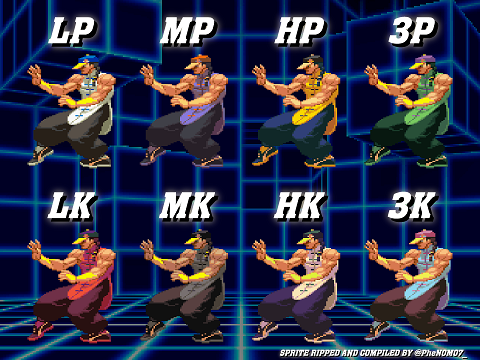