Vega, called Balrog in Japan, called Claw worldwide, is a noble-born Spanish man. Raised in a wealthy home, Vega lived a privileged upper-class life, until his family's status one day began to dwindle. For financial reasons, his mother remarried to a very ugly and rude man in order to continue to care for Vega. Vega wanted nothing to do with his home life around the man, and instead delved into the local art of bullfighting. He had hunted much in his youth, but found that hunting was boring in comparison to the close range thrill of a bullfight. He became quite skilled at it as well, being very nimble and able to move around quickly. At one point, he traveled to Japan and studied Ninjutsu, believing it to fit him well thanks to his agility and lithe build. Combining his odd set of skills from bullfighting and ninjutsu, Vega learned cage fighting styles as well, and became a feared cage fighter in Spain.

Vega's life collapsed when his stepfather murdered his mother. He claimed it was because she didn't respect him enough. In a rage, Vega brutally murdered his stepfather, and found he enjoyed it a bit. This caused Vega to develop two distinct personalities from the trauma: one, a dignified cage fighter and bullfighter, and the other, a brutal and sadistic serial killer. It also gave him his obsession with beauty as a whole, feeling that things as ugly as his stepfather were truly evil and needed to be killed. His skilled fighting abilities, high speed, and penchant for murder brought him into the eyes of M. Bison very early on, and he joined Shadaloo well before the events of any Street Fighter, becoming the head of their assassination division and working closely with Cammy White and the other Dolls.

Vega is a high tier poking and zoning character, able to fly around the screen with his ridiculous mobility and threaten a whiff punish or poke safely with his claw. His claw in general is one of his most defining characteristics, giving him his unique reach, disjointed normals, and powerful whiff punish ability. While Vega in games like Street Fighter II: Super Turbo is infamous for his walldive mixups, those just aren't as strong in CvS2, forcing Vega to more rely on his ridiculous normals. This makes him admittedly quite simple: use your strong, disjointed normals to control space, while moving around the screen and evading your opponents attempts to hit you back. While this sounds like a gameplan lacking depth, CvS2 is a neutral focused game, so a character with incredible neutral like Vega is more than equipped to excel in this game.

Vega does have a few weaknesses holding him back from being a true top tier. Most likely the biggest is his defense. He has low health overall, but Vega has a unique system present. If you hit him enough, he first drops his claw, horribly nerfing the reach of all of his normals. If you hit him a bit more, he loses his mask, which sets his health value to the lowest in the game, tied with Akuma. This means that a few good hits turns Vega from a solid high tier to a fragile and weak character. His lack of a reversal without roll cancel can exacerbate this weakness, meaning that if you catch Vega one good time, it may be over for him. If you want a simple character who just presses his big and powerful buttons while running fast around the screen, and don't mind occasionally being killed in two or three hits, Vega is for you.

Best - A: A-Vega is a notorious character in A-Groove, and is present on what is considered likely the second strongest A-Groove team (A-Vega/Bison/Blanka). Vega doesn't rely on meter to sustain him, but in a similar sense to the top tier Sakura, he excels with meter using Custom Combo. While his CC isn't the most damaging one ever, like Sakura or Bison, his amazing neutral and mobility makes it a much more threatening tool. Think of it like this: Vega gets to play neutral and win it every time, and then the one time you win it, he has CC and can punish what you do or reversal through it and safely reset to neutral. Things like roll and Alpha Counter also help him a bit, but Vega gets to play his game of poking and prodding with or without roll.

Useful - K/C/N: K-Vega is a bit different than his A-Groove counterpart. While he still plays his safe neutral, he gets to play a lot more aggressive thanks to his run and hop. Vega's run especially is great, being the fastest run in CvS2. Thanks to this, his already great mobility gets another buff, and hop lets him move in even more dynamic ways. JD gives him a needed defensive mechanic, and thanks to his 2HK slide and his great reach on all his claw normals, you can usually punish after a good JD. Rage makes his pokes do more damage, and allows him to combo into a level 3 for great damage overall. C-Vega gets to play like a lesser A-Vega. Airblock is actually quite helpful, as Vega's already amazing jump becomes even safer. Having cheaper access to Alpha Counters is also very strong, and more access to supers to buff his damage helps with the loss of his Custom Combo ability overall. N-Vega has similar strengths to K-Vega, but sacrifices the potential damage of a level 3 in Rage for access to rolls. Rolls are fairly useful for Vega, as they give him a true reversal, something he wants a lot on defense.

Worst - S/P: S-Vega is a lot more gimmicky. Vega's supers are decent combo enders, but don't have any overwhelming neutral capabilities or give him some amazing vortex like the better S-Groove characters do. While he does have run and hop, K-Vega also has those, and dodge doesn't give him much that a good RC wouldn't do. P-Vega, while he does get to at least poke the opponent, has to sacrifice charge to get a parry. Since all of Vega's specials and supers are charge based, this means P-Vega never really gets a good chance to punish after a parry, even when he does have meter. 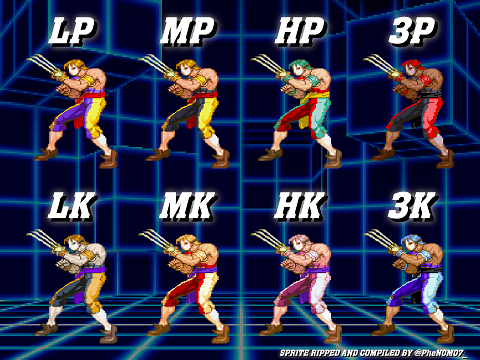