Mai Shiranui is the last female heiress to the Shiranui ninja clan. As such, she is a highly skilled ninja in the Shiranui-ryuu fighting style, and likely the best in the world at it. The only other notable fighter who uses Shiranui-ryuu is Mai's boyfriend, Andy Bogard. Aside from her ninja training, Mai is an air-headed but strong woman who fights for her team, Team Women's Fighters, year after year in The King of Fighters. She is a bit hot-blooded at times, but cares for her teammates. Mai is also madly in love with her perfect man, Andy Bogard, and chases after him at all times. She appreciates things of great beauty, including herself, and will compliment men who look similar to Andy. However, she always ends with them being "not as cute as Andy".

Mai is one of the most popular characters in SNK history, for her interesting backstory, fun playstyle, and no other reason really.

Mai is one of CvS2's many zoners. Her Kachosen fireballs are useful and versatile space controlling tools that let her keep her opponents at bay, and her strong run away tools can frustrate opponents trying to work around them. Her Ryuuenbu fire attack can delete other projectiles as well, allowing her to counter-zone as effectively as she zones. Her mobility is much higher than the average character, with a stellar walkspeed, above average run, and a walldive and divekick for escaping bad situations. Her punish game isn't anything to scoff at either, especially if she has a level 3 super behind it.

These don't come without downsides however. Mai has much lower health than the average character, and lower stun too. While she can absolutely run away and zone for the entire match, if the opponent catches her a few times, it can end quick. Her defensive options aren't stellar either, with her only real reversal being a charge move with 25 frames of startup and still being a massive -42 on block. She doesn't have a 2 frame button either, making her mashing a little bit worse than the average character. This forces her to try and escape offensive pressure rather than fight back. Her offensive options aren't the best either, lacking any standing overheads or safe on block specials to pressure with.

These weaknesses don't knock her down too hard however, as Mai is still widely considered a high tier character in K-Groove. If you like to zone and run away from your opponents, and then punish their committal attempts to catch you with a massive level 3 super combo, then Mai is for you.

Best - K: Mai is most widely played in K-Groove. Rage can make her poke and zone game a lot more damaging overall, and approaching Mai with Rage is scary, as if she tags you with one strong normal she gets to cancel into level 3 Cho Hissatsu Shinobi Bachi (2141236K) for massive damage. JD allows her a more powerful defensive tool as well. Her run is one of the fastest in the game, and mixed with shorthops it makes her mixup game a lot more real and allows her to pressure the opponent with more legitimate threat behind it.

Useful - C/N/A/S: Mai sees some usage in every other Groove, although they all sacrifice something. C-Mai gets more access to her supers, Alpha Counters to help her defense, airblocking to help her escape, and her roll is above average. She loses out on run, hop, and the threat of Rage. N-Mai gets run and hop, rolls, and guard cancel rolls to escape from pressure. She rarely uses her supers however, as her level 1 supers are underwhelming. A-Mai gets access to Custom Combos, and all the benefits of C-Mai save for the supers. She loses out on the movement ability of other Grooves, and almost never has a super, though her CC is still fairly useful. S-Mai gets the movement and access to infinite level 1 supers at low health. While her level 1's aren't stellar, having infinite of them makes them quite a lot scarier. She doesn't mind charging but Mai generally wants to stay mobile, and she has to sacrifice any other powerful tools in other Grooves and deal with the lacking mechanics of S-Groove overall.

Worst - P: While parries do help her to deal with rushdown pressure, Mai punishes just aren't that scary without meter, which P-Groove rarely has. Mai would rather zone than approach as well, and parries are best used offensively. P-Mai gets very little, and what she does get, you would likely rather just play K-Mai for. 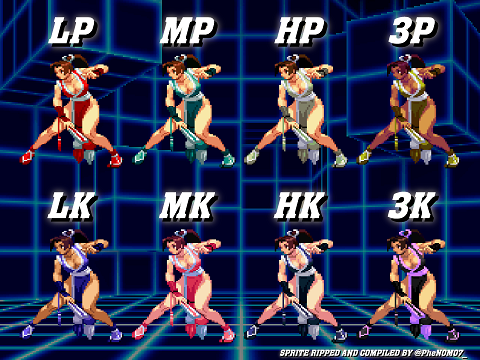