Blanka, who was born named Jimmy, is a feral man from the Brazilian jungle. One day, a boy named Jimmy unwittingly boarded a plane that was sabatoged by M. Bison and Shadaloo. It crashed somewhere over the Amazon rainforest, where Jimmy was lost. He was raised in the wilderness, becoming feral. He turned green, with orange hair, and learned to control electricity through his now much stronger body. One odd day, he hopped into the back of a car looking to eat a melon, not knowing it was a poachers car. The poacher drove Jimmy back to civilization for the first time in many years, and since then, Jimmy has lived as Blanka. Blanka competed in the first World Warrior tournament, where his mother was spectating, and his story ends with a tearful reunion. He now lives a peaceful life with his mother and his best friends Dan Hibiki and Sakura.

Blanka is a powerhouse of a top tier. Usually considered second only to Sagat in terms of strength, Blanka has all the tools a CvS2 character needs and more. Insane buttons and neutral control, high mobility, solid damage, great metered damage, useful defensive tools, and a few very powerful roll cancels send Blanka to the top of the tier list. He's quite Groove friendly as well, as while you usually see him as the classic anchor for A-Groove and N-Groove teams, Blanka excels in every Groove to some extent. A-Blanka is usually considered the strongest, and is a mainstay on the best A-Groove players teams. His ability to use Custom Combo offensively is stellar, and it gives him a very scary defensive option to work with. Mixed with his amazing neutral, your opponent has to take a risk to get in, which you can punish with a big Custom Combo into a mixup.

Blanka has very few real weaknesses in any setting, and is a simple and reliable pick for your team regardless of Grooves or team composition. He has every tool you would want and then some. If you want to win, and especially if you play A-Groove, you should definitely try out Blanka.

Best - A/N: A-Blanka, as stated above, is Blanka's most powerful Groove. A-Groove is already widely considered the best Groove in the game thanks to Custom Combo and the other versatile subsystems. Alpha Counters give Blanka a solid get-off-me tool, rolls are useful for everyone but Blanka has two incredible RC specials with RC Electricity and RC Blanka Ball. While he doesn't get access to his admittedly strong supers, Blanka's CC is no joke, and turn his punishes from high damage to very high damage. N-Blanka gets much of the same, but now has run and hop on top of it, in trade for only having level 1 supers to end in. Run is a useful tool for his pressure, but hop is especially powerful. Blanka's hop HK is nigh uncontestable by anything that isn't invincible. Only having level 1 supers isn't that bad either, since Blanka has very useful level 1's. N-Blanka is defined by strong roll cancels, abusive hop pressure, and consistently ending combos in supers for huge damage.

Useful - K/C/P/S: K-Blanka is right behind A and N. Rage and JD make for powerful neutral and high damage punishes. One solid hit from Blanka leads into a super for massive damage, and his Raged pokes are no joke. He can punish pretty reliably after a JD, and his simple poke-based neutral becomes much scarier in Rage. The loss of rolls hurts, but it's really the only big sacrifice. C-Blanka is similar to N-Blanka, but loses the mobility in exchange for airblocking and more versatile meter. Level 2 combos are a powerful tool for consistent damage, and the level 3 supers of C-Groove uniquely don't have any sort of prerequisite to spending them, allowing Blanka a chance at big damage. The loss of mobility hurts however, and A-Blanka Custom Combo is more valuable to him than level 2 supers, so generally C-Blanka loses to A-Blanka. P-Blanka gets parries, which give him more consistent punishes. A parry can easily lead into a punish like 2HK > Hop, starting Blanka's scary Electricity mixups. Sadly, P-Groove has no rolls, so you lose out on RC Electricity, but having hop HK is still strong enough of a neutral tool to not worry as much. S-Groove is the weakest Groove overall, but Blanka is solid enough to not worry about the lacking mechanics. Loss of RC Electricity and RC Blanka Balls is rough, but you still get run and hop, and dodge isn't entirely useless for Blanka.

Worst - None: Blanka is an incredibly solid character overall, and your Groove selection won't hurt him much. He excels in some more than others, but is a valuable pick in every Groove.

!!!THIS PAGE IS STILL A WIP. IF YOU NEED FRAME DATA NOW, REFER TO THE CVS2 BIBLE OR LOOK THROUGH THE EDIT HISTORY FOR THE LAST EDIT CONTAINING FRAME DATA IF THERE WAS ONE!!! The only attack you'll need

Top Tier in one image 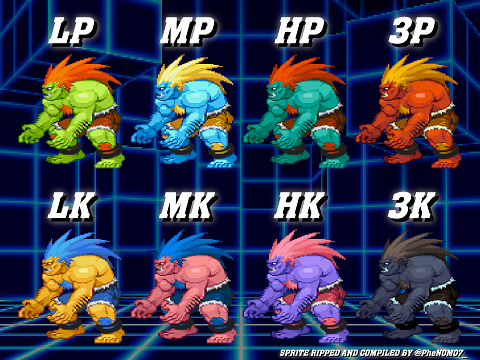