Guile was a United States Air Force lieutenant, and one of the original World Warriors. One day, his best friend and commanding officer Charlie Nash went missing after going on a secret solo mission to destroy Shadaloo and M. Bison/Dictator. Guile was ordered to locate Charlie, and on his quest he finds and befriends Chun-Li. Chun-Li tells him of Shadaloo, and warns Guile that it would be very dangerous. Guile continues on regardless, and the two go to Thailand, where they find Charlie and the Shadaloo base. Guile and Charlie fight M. Bison as Chun-Li sets explosives inside of Shadaloo's base. Charlie gets shot by a Psycho Shot, and M. Bison almost hits Guile with a Psycho Crusher but Charlie saves him. The explosives detonate, and Guile and Chun-Li make it to safety. Guile mourns the death of Charlie. M. Bison survives, and later on Guile fights him again to get revenge. Guile wins, and is ready to kill him, but suddenly his wife and child appear. They tell him not to kill M. Bison, and Guile listens, going home to be a family man.

Guile is the classic charge character, and one of the most popular fighting game characters in history. He's very simple to learn, having only two special moves and a suite of command normals to make up for it. His two specials, Sonic Boom and Flash Kick, are very obvious in usage and give Guile an easy gameplan. Booms are amazing projectiles that can be hard to fight against, and Flash Kicks are amazing anti-airs that will snipe anyone trying to jump over a Boom. Combining usage of these two specials and properly utilizing his extensive list of normals is key to mastering Guile.

Guile doesn't come without weaknesses however. Likely his biggest weakness is something intrinsic to his character: all of his specials require charge. This means that, unlike a fireball, Guile has to pre-emptively start charging for his fireball. By charging, Guile has to give up approaching, making it so he has to play a very patient and turtle-style game. You have to actively choose between approaching or keeping your powerful fireball and anti-air stored, you can't have both without taking massive risks like whiffing his forward moving normals or jumping. The player has to learn to keep or give up charge depending on the situation. This also hurts his combo game quite a bit, as he doesn't always have access to a consistent knockdown or even really consistent damage.

All in all, Guile is a patient zoner-style character who uses his extensive list of useful normals, powerful fireballs, and strong anti-airs to control the pace of the match. He has amazing neutral and defense, but his offense is limited and requires smart charge management, with very little mixup possibility.

Best - C: C-Groove is the most popular for Guile, and for good reason. Easy access to plenty of meter means Guile can more easily end in super, and he can have his powerful level 3 super more often. Air blocking allows him to jump forward while maintaining charge and remain relatively safe. Alpha Counters give him a good defensive option, and his level 2 combo is actually quite good. Plus, roll gives him RC Sonic Booms, which is one of the best and probably most annoying Roll Cancels in the game. Rolls are also a useful, if gimmicky, way to approach while keeping charge. C-Guile has everything he needs to succeed, where other Grooves make him sacrifice something.

Useful - N/K: N-Groove and K-Groove are right behind C-Groove in terms of viability. N-Groove is the most versatile Groove, making N-Guile a great fit. He keeps the roll like in C-Groove but gains a run and shorthop, which legitimizes his pressure and mobility a lot more. Easy access to level 1 supers lets him end in knockdowns more, plus he has guard cancel rolls and safe fall. N-Guile has a bit of everything. The main weakness is that Guile can't easily access his level 3, which is an amazing super, and doesn't have his great level 2 combo. K-Guile gets access to Rage and JD, both very powerful mechanics, and gets roll and hop just like N-Guile. Rage makes Guile's poke and projectile gameplan a lot more damaging, and JD is a very solid defensive tool that benefits Guile who can easily start charging after a JD. The lack of rolls and loss of level 1 supers hurts however.

Worst - A/S/P: A-Guile is questionable. His CC isn't great, and Guile would rather use the meter for a level 3, which you would never pick over a CC in A-Groove. He isn't useless, as A-Groove is simply powerful on a base level, but it's definitely weak for him. S-Groove is even worse for him, as charging meter leaves him wide open. He basically doesn't benefit at all from infinite level 1s, as the power of his level 1s is that they give him a consistent knockdown, and he only gets his level 3 when at low health. P-Groove is likely the worst one, as Guile has to give up charging to parry, and even then his punishes aren't strong without full meter. Having only level 3s means Guile rarely has a super in the first place, and can basically never parry into a knockdown. The reason you play him 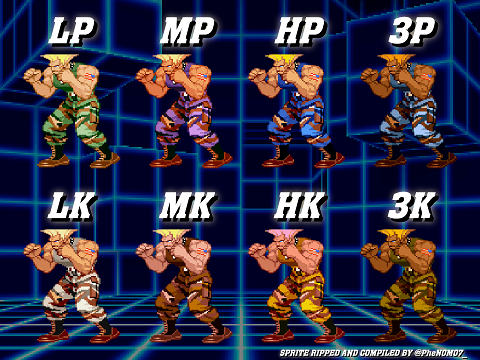