Morrigan Aensland is a succubus, and one of the two protagonists of the Darkstalkers series, acting as an anti-hero. She is the daughter of Belial Aensland, and heir to Makai, the realm of darkness where the Darkstalkers live. She grew into a powerful succubus, but was sadly born into a time of political turmoil for Makai, as many foresaw its doom soon. Sadly, a succubus ruling Makai was considered unacceptable. Alongside all of this, Morrigan's power was enormous even for a Darkstalker. While this sounds like a great benefit in the harsh climate of the time, her power was so large that it threatened to destroy her. Knowing this, her father Belial split her soul into three equal parts, leaving her with only 1/3rd of her original power. He took one of the thirds, and another was sent to a pocket dimension. Morrigan is bored throughout her childhood, and frequently escapes to the human world. However, during one of her trips, her father died. Not only did this mean she was set to inherit the Aensland throne, it also meant she regained a third of her power. She is to be the true ruler of Makai, but only learns what that means when Jedah pulls her and the rest of Makai into his dimension. She meets Lilith there, the last 3rd of her power that Jedah gave life, and fuses with her to become once again the most powerful Darkstalker. She defeats Jedah, and assumedly lives life ruling over Makai to this day

Morrigan is a very unique character in CvS2. While on the surface she resembles the standard shoto character, with a fireball, DP, and decent pokes, she's actually an incredibly powerful mixup vortex character. Morrigan has a few main unique factors, but the most immediate one is her hoverdash. In dash Grooves, this is a standard dash and is a fairly weak one. However, the moment you put her in a run Groove, it becomes a very versatile mobility tool. She can end it very quickly, hold forward to hoverdash for a very long time, and even switch to holding up to angle her hoverdash upwards. From hoverdash, she can go into any aerial. This allows her to create incredibly ambiguous high/low/crossup mixups on wakeup. Mix that with her command grab, and you have a powerful vortex that can be hard to escape.

Her other main unique factor is her chainable normals. Her normals can cancel into eachother, akin to more modern anime fighting games, and a direct steal from the mechanics of Darkstalkers. She can chain punches into kicks, and standing attacks into low attacks. This gives her a more freeform combo and pressure structure, and also makes her combos notably easier, though also lower damage. This is alright, as she can combo into her Darkness Illusion super for much higher damage. Her neutral game is nothing to scoff at either, with a useful fireball and good DP, and solid mobility overall. If you don't mind her much lower health, and the lack of meterless damage, Morrigan is a great mixup focused character to play.

Best - K: K-Morrigan is easily the best Morrigan. Mostly, this is because K-Groove has a run and a shorthop. Run is almost entirely necessary for Morrigan to succeed. Rage makes her subpar damage skyrocket, and lets her confirm into DI for big damage. JD is useful as a defensive tool, and since her main combo ender is just her sweep, her punishes from JD are actually quite consistent and lead to great reward. Hoverdash mixes with JD very well, as people will often try to anti-air you to beat hoverdash. You can JD this and sometimes punish it. K-Morrigan is the best baseline Morrigan Groove, and it gives her all she needs to put the opponent in a vortex and close out the round with unseeable mixups.

Useful - N/S: N-Morrigan gets all the movement tools of K-Morrigan, plus rolls. While she doesn't exactly need roll cancel, RC fireballs are still useful overall, and her roll gives her another escape option to utilize. Her level 1 supers aren't horrible combo enders, and her air fireball super is fairly useful as well. N-Morrigan lacks the high damage potential with Rage and will rarely be able to combo into DI. S-Morrigan gets run and hop, and since Morrigan doesn't need meter, she's fine not having supers for a majority of the round. Once she gets to low health, she just gets to end combos in level 1 Cardinal Blade more if she feels like. S-Morrigan still has to deal with S-Groove mechanics, but is overall a solid point character.

Worst - C/P/A: These Grooves all have one thing in common: not having a run. This isn't a dealbreaker, and Morrigan is still playable in them, but you sacrifice what makes her strong. C-Morrigan is the best dash Morrigan Groove. While not having run is a MAJOR weakness, C-Morrigan plays more like a shoto, zoning with air fireballs and anti-air DPs until she gets a hitconfirm into a level 2 Cardinal Blade combo or a level 3 Darkness Illusion combo. She lacks the rushdown of run Grooves, making her play starkly different than normal, but is still functional overall and a unique way to play her. P-Morrigan gets very consistent punishes from a parry, and a shorthop which brings her mixup game back a little bit, though you would still rather have hoverdash. Just like any P-Groove character, you will live and die by how well you parry. A-Morrigan is likely the worst, though not by any fault of A-Groove. Her anti-air Custom Combo is fairly damaging, though her grounded one isn't as much. She just doesn't utilize CC very well, and without hoverdash, she becomes far too weak. 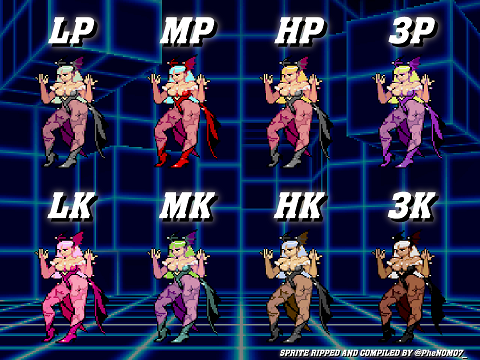