Dan Hibiki is the stupid and egotistical owner of the only dojo in the world that teaches Saikyo Style, Dan's self made martial art. Dan dedicated his life to creating and practicing martial arts after his father, Go Hibiki, was killed by Sagat. Go was known as one of Sagat's rivals, and in their last fight, gouged out Sagat's eye. In retaliation, Sagat beat him to death. Dan hunts after Sagat to this day, even after Sagat has changed and begun to atone for his crimes. However, Dan's ego and headstrong nature gets in his way a lot. He believes Saikyo is the greatest fighting style, and he is the greatest fighter in history. While he shows potential sometimes, he is overall very novice and unskilled. His belief that he is the best however holds him back from improving at all, and he constantly charges into fights that he can't win.

Famously, Dan's design is a jab at SNK devs. Once Street Fighter II: World Warrior was released, a lot of the team moved over to work for SNK. There, they created the Art of Fighting series, and the protagonist Ryo Sakazaki. Ryo shared more than a few similarities with Street Fighter's protagonist Ryu, from moves to personality to design. While Ryo has since evolved to be much more unique, Dan was created to be a mockery of Ryo in the beginning, and you can see many similarities in their moveset.

Dan is the original joke character. Most of his moves are bad on purpose, and he has very little that isn't entirely outclassed by other characters. He plays similar to the shotos like Ryu and Ken, with all-rounder normals, a fireball, and a DP. However, many of his tools are much worse overall. His fireball is tiny and doesn't go anywhere, his DP has no range and is slower than average, plus it only has invincibility randomly, and his 214K Dan Kicks barely work as combo enders at all. His supers aren't bad, but are overall underwhelming with a lot of flaws. He lacks any dangerous mixups, and his damage is much lower than average when he can even land a combo.

This isn't to say Dan doesn't have any unique strengths. The fact he is a joke character and is so underplayed is a strength in itself, as your opponent likely doesn't know the matchup. In reality, Dan's biggest strength is his j.214K Air Dan Kicks. These are great tools for mobility and getting advantage on block, and allow Dan to move around in the air more freely than almost anyone else. He also is still a shoto, and while his normals are the worst of them, he still has at least a mediocre tool for every situation

Best - K/A: K-Dan is the best way to play Dan, which isn't saying much. Rage gives him a much needed damage buff, while run and hop give him better mobility and more legitimate mixups. JD doesn't work too well in his favor, but it is appreciated as a defensive tool in general. Dan's higher than average health means that he can more often have Rage as well, and his level 3 supers are actually pretty useful, making his offense a bit scarier. A-Dan gets access to all of the powerful A-Groove mechanics, and some unique and strong Custom Combos. CC in general is a powerful mechanic that Dan can abuse, though not that well. Rolls give him a much needed escape option, but without run or roll, his offense is basically nonexistent.

Useful - C: C-Dan gets all the same tools as A-Dan, plus airblocking, minus Custom Combos. Without CC his damage is a lot worse, but a solid hit into a level 2 combo actually does very respectable damage. Airblock lets him more safely take to the air, where he can abuse his Air Dan Kicks a lot more. You still have to deal with Dan's own weaknesses however.

Worst - S/N/P: All three of these Grooves are very hard to work with. S-Dan is a horrid character without meter, but with meter he at least gets to end combos in supers sometimes and replace his fireballs with the super version. Without any notable other strengths, and the necessity to charge meter, S-Dan has to give up a lot of screen space to build meter that he needs for damage. N-Dan gets run and hop, and roll too, but only having level 1 supers and having no mechanic like Rage or CC or level 2 combos to make any punish actually scary makes him very weak. N-Dan is inferior to K-Dan if you want the mobility and A-Dan if you want the rolls. P-Dan is basically worthless. Dan's meterless punish game is nonexistent, and his level 3's are good but not above average like other characters in P-Groove. Without any other mechanic to make P-Dan attractive, he has nothing of note really. 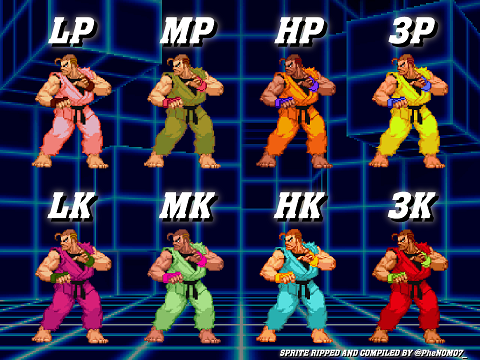