Ryuhaku Todoh, stylized as just Todo in this game, is the inventor and primary teacher of Todoh style Kobudo, a style derivative of Aiki-jujutsu and Kendo. He has a long standing dojo in South Town, and a heavily developed rivalry with the nearby Kyokugenryu dojo. This rivalry is for various reasons: the Kyokugenryu dojo is more successful and takes a lot of profit from his dojo, and the Kyokugenryu style is just a lot more popular. Likely the biggest reason however is his rivalry with Takuma Sakazaki, the head of the dojo, dating back to their younger days.

When Yuri Sakazaki is kidnapped, Ryo immediately sets his sights on Todo, believing him to do it because of his animosity towards the dojo and fighting style. Todo had nothing to do with it in reality, but an enraged Ryo still beat him up badly. This was the final blow to both Todo's ego and the dojo as a whole. Students stopped enrolling, his funds plummeted, and his own humiliation hurt more than anything. Todo decided to disappear one day, with the only hint to where he was being his wife, who claimed he was training far away for a rematch with Ryo. His daughter, Kasumi Todoh, loved her father dearly. She refused to sit and wait, and mastered the Todoh style Kobudo, embarking on a quest to find him and to take revenge on every Kyokugenryu fighter she could find.

Todo is a seemingly simple character with some surprising execution required to master him. He only has 4 special moves, with 3 of those specials just being variations on the same move. His various Kasane Ate wave specials allow him to control space and are very plus in most situations, making for oppressive projectiles. 236P simply sends out the wave in front of him, with the different strengths determining the distance. These are +6, meaning you can realistically link from them if close enough. 623P is Aogi Kasane Ate, or Scrape. While these look like anti-airs, they are a bit too slow for that, but still work well if done preemptively enough. j.236P is Tobi Kasane Ate, or air wave. These are amazing air-to-airs and pressure tools, especially when done with a tiger knee input (doing the input as 2369P in order to do it as soon as you jump). These also leave you incredibly plus, especially on block. His final special is 63214P Taikuzushi, or Command Grab. This is an amazing command grab that allows him to combo from it, making for very high damage combos. When roll cancelled it's especially strong, as it can go through mashing and even be used as a realistic anti-air!

Todo has various useful normals and links as well, solidifying him as a neutral and pressure character. However, he does come with a few major weaknesses holding him back. While he has decent damage potential, nothing he does ends in a knockdown, limiting his ability to properly mix an opponent up. While his health is high, he lacks a reversal, leaving him struggling on defense or forced to spend meter. He only really has one useful super as well, 236236P Cho Kasane Ate. His other super, 2363214P Shingan Kazura Otoshi, is a counter with startup super flash. This basically screams "I'm doing my counter move!" and makes your opponent very unlikely to press a button if they're paying attention. He lacks a reversal, leaving him very weak on defense without roll cancels, though roll cancels make him a lot scarier overall. Todo is a straightforward neutral/pressure character with a difficult but damaging Custom Combo, and if you like some difficult execution on a seemingly simple character, you might have a lot of fun with him.

Best - A: It's hard to justify playing Todo in any Groove besides A-Groove. A-Todo gets a very powerful Custom Combo, and a lot of ways to utilize it. Links after Kasane Ate in the corner, activating after a command grab for 10k+ damage, great guard crush potential with repeated Kasane Ate's, Todo has it all. He also gets roll, which he absolutely needs for RC command grab. RC command grab becomes much scarier in general because of the Custom Combo from it. A-Todo is a clear optimal Groove for him.

Useful - N/C/S: N-Groove gives Todo much better movement, mainly having hop, which helps his mixups a lot. Having consistent level 1 supers isn't bad, but Todo can also activate Max Mode, which gives him a decent and useful damage increase. He maintains roll for RC command grab and RC Scrape, and cheaper access to guard cancels for better defense. His supers are fairly useful, and the level 2 version of Cho Kasane Ate does decent damage. C-Todo gets rolls too, and his guard crush potential is a lot better with multiple supers. S-Todo similarly gets to spam level 1 Cho Kasane Ate, and can do it infinitely at low health, making for much scarier pressure. Charging is a chore however, but since Todo has decent neutral and offensive presence, people might not be as quick to press against you. Run and hop, similar to N-Todo, give him better mixup ability to go with his ridiculous safety on block.

Worst - K/P: All 3 of these Grooves sacrifice roll, which Todo really likes having for Roll Cancels. K-Todo gets Rage, which does up his damage, and Just Defend is a useful tool both offensively and defensively. Hop and run aid his mixups as well, but level 3 Cho Kasane Ate does pitiful damage for the cost, making his damage much less worthwhile. P-Todo similarly has very little, as his meterless punishes aren't bad but aren't amazing either. Having a level 3 stored doesn't do much to give him more damage either. S-Todo gets to end combos in level 1 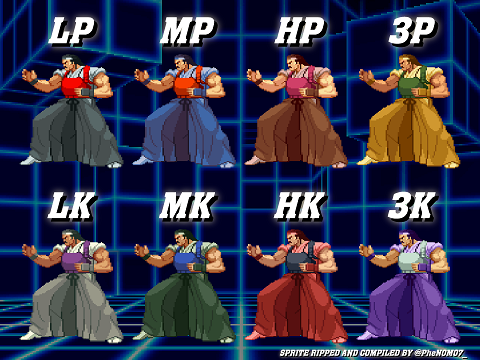