Athena Asamiya is a Japanese teenage idol who is famous worldwide for her beautiful singing voice. She's also the reincarnation of another older Athena, who was also a rambunctious teenager, and was also a goddess from the Heavenly Realm. As her reincarnation, the modern day Athena shows incredible magical ability, especially weilding Psychokinesis. She's a trained martial artist as well, training under a highly respected Chinese martial art master named Chin Gentsai. Together with Chin, her fanboy and psychokinetic partner Sie Kensou, and another young boy who shows great power named Bao, Athena learns more about her powers, while maintaining her life as a famous musician.

Athena is a neutral focused character mainly, with a few surprisingly good mixup tools. Sadly, Athena tends to fall in with the low tiers of CvS2. Her low health, bad defense, and extremely low damage output makes it so she's constantly fighting an uphill battle. Still, Athena does have a single saving grace: her neutral is very good overall. Her buttons are stellar, especially her infamous 2HP which is a lightning fast poke with great range and a tendency to stuff any other midrange button the opponent presses. Her fireball can be quite useful as well, especially when roll cancelled. Her mobility isn't exactly a joke either, sporting a useful divekick and a teleport that can sideswap. She also possesses a somewhat scary mixup game, between her command grab which she can juggle off of, a slow and big fireball to end blockstrings in, and her aforementioned teleports to run a strike/throw mixup on opponents too scared to interrupt her.

While these sound like great pros, Athena just doesn't get the proper reward for the risk she takes. Her combo potential is virtually nonexistent, with her only solid combo ender special being her 623P which whiffs after most normal cancels. This leaves her either ending her pressure or combo at just a normal hit, or cancelling into a special and risking her short health bar for another low damage mixup. Her defense isn't that great either, since her 623P isn't a true reversal, leading it to get stuffed a majority of the time. Likely one of her biggest weaknesses lies in her supers, which are incredibly unfriendly to combos, leading them to be almost exclusively utility. Luckily, they do make for some very solid utilities.

Athena is a low-tier hero with some incredible normals, scary knowledge check mixups, and decent ability to run away.

Best - C/S/A: C-Athena is likely her best Groove overall. While she gets very little from level 2 cancels because of her weak combo potential, her supers make for great utilities, especially Shining Crystal Bit. It's a 0 frame startup invincible reversal/anti-air that she can cancel out of with a PPP input. Even the level 1 version has full startup invuln and instant startup, making it very useful to have it often. Airblock makes her retreat safer, and Alpha Counters give her a very appreciated escape from pressure. S-Athena is a surprisingly great fit for her, as her lack of reliance on supers for damage means she doesn't actively need them to be a threat. Charging is a risk, but her scary neutral ability makes it harder for the opponent to react and punish. Infinite level 1 supers means she can constantly anti-air and reversal, making approaching her much more difficult overall. A-Athena loses her utility supers in exchange for much needed damage. Her Custom Combo is surprisingly good, though difficult, and makes it so that she can actually punish things more effectively. All of these Grooves actively sacrifice something in exchange for the others, so Athena has no one true fitting Groove, so play with these and see which you like.

Useful - N: N-Athena is arguably not that good, but being able to run more consistent mixups is never a bad thing. Run and hop give her more varied mobility, and also having access to roll for escapes is useful. Having consistent access to level 1 supers means she can anti-air and reversal with Shining Crystal Bit more. Still, her lack of damage overall means the usually offense oriented N-Groove just doesn't fit too well.

Worst - K/P: K-Athena gets the mobility of S-Athena, but the heavily rushdown based K-Groove just doesn't fit her runaway gameplan. While she does get some solid damage buffs, especially to her normals, she rarely gets to utilize her Shining Crystal Bit, and without a solid super punish Rage just doesn't work that well for her. K-Grooves lack of an escape option outside of JD hurts as well, and JD is usually more used to reversal into a punish, which she doesn't have. Keeping in mind how JD isn't too useful, P-Athena being at the bottom should be obvious. Parry means nothing with no good punish, and only having a level 3 Shining Crystal Bit once a round at best leaves her without one of her best utilities. 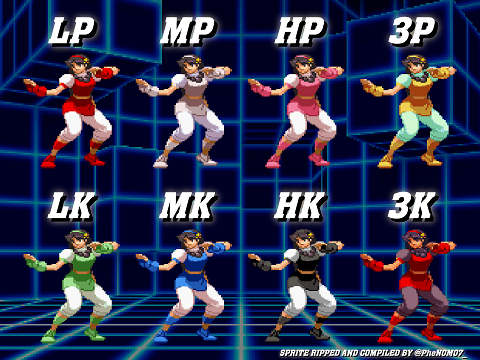