Cammy White, a.k.a. Killer Bee, is an ex-Shadoloo member and a Doll who gained self-awareness and broke free from M. Bison/Dictator's control with help from Dhalsim. Dolls were clones of M. Bison himself who were made to be his personal assassins and guards, acting very robotically. Cammy freed the other Dolls, but an explosion caused her to lose her memory, and Vega/Claw deposited her at the base of Delta Red, a paramilitary organization. After learning about the World Warrior tournament in the events of Street Fighter 2, Cammy entered, feeling a connection to M. Bison. She learned of her true past, and decided to spend the rest of her life fighting against M. Bison.

Cammy is one of the best characters in CvS2, likely right behind the top tiers. Her strengths are numerous, from some of the best normals in the game to plenty of powerful specials and mixup potential. Her amazing walkspeed allows her to keep her preferred range easily, and some of her amazing buttons like 2MK and especially 5HP keep the opponent constantly in check. Her signature special, Spiral Arrow, allows her to punish a majority of fireballs and can be spaced to make her safe and get her in. Her uppercut, Cannon Spike, is incredibly fast with great priority and invincible startup, eating up any jump at all and giving Cammy great air control. Her divekick, Cannon Strike, is a is a powerful dive that allows her to alter her jump arc and leaves her very plus. With meter, any good hit from a long distance poke or ridiculously plus close range normal can confirm easily into her Spin Drive Smasher super, usually called SDS, for insane damage. Fast ground speed, insane frame data, scary offense with meter, and versatile specials make Cammy an offensive grounded nightmare.

Cammy does have a few major weaknesses holding her back from being as strong as characters like Sagat or Blanka. Her health is lower than the average character, against characters with high damage she can be KOd with a few good moves. She has a very floaty and high jump, and while having a strong divekick makes it a bit better, anti-airing her is still easier than most characters. Probably the biggest weakness is she has one of the worst rolls in the game, being very slow and reactable, making it very risky to roll with her. Nevertheless, these weaknesses barely hold back an otherwise stellar character.

Best - K/P/C: Cammy has three popular grooves, K, P, and C. K-Cammy is the best of the three, as Cammy works incredibly in K-Groove. Rage makes her aggressive movement scarier as any poke can confirm into a level 3 SDS for massive damage. Shorthop and run gives Cammy more ways to move around, and her hop normals are amazing. JD is a powerful defensive option, and since Cammy can easily confirm into SDS or Spiral Arrow she can almost always get a punish after a good JD. A lack of roll doesn't affect her at all either, considering her roll is so bad. P-Cammy is also quite good, as similar to JD Cammy can easily punish into a knockdown from any parry. While P-Cammy won't always have super, being able to parry so easily into level 3 SDS when she does have it makes her terrifying. While she doesn't have run, she does have shorthop, and no rolls is no issue. C-Cammy sacrifices a lot of these for more ways to get SDS out, making her neutral and pokes much more threatening. C-Cammy also has a powerful and stylish level 2 combo.

Useful - N: N-Cammy is just a little behind C-Cammy. N-Cammy combines aspects of K-Cammy and C-Cammy by being able to cancel into level 1 SDS often, and maintaining the movement of K-Groove. Max Mode is somewhat useless as Cammy would rather spend that meter on a confirm into SDS, but it's a useful option. N-Cammy can barely make use of guard cancel roll however, and her roll in general is far too weak for N-Groove.

Worst - S/A: S-Cammy and A-Cammy are her two weakest grooves. Cammy likes her meter for SDS cancels, and S-Cammy has to give up aggressive space to build meter. S-Cammy at low health does get access to infinite level 1 SDS but her health is so low that this is incredibly risky. A-Cammy has none of the mechanics to aid her movement, and while CC is strong, Cammy uses the meter better by confirming into SDS. By no means however are either of these Grooves bad, Cammy works well in both. Just that the others give her much better options overall. Razor Edge Slicer
Low Followup
After Hooligan, do nothing

Cammy is easily one of the strongest characters in CvS2, and is pretty easy as well. Her strengths are obvious, with her incredible best-in-class normals and three powerful specials (and two sorta useless ones) that give her an amazing grounded game. To compliment this, her walkspeed is stellar, allowing her to walk in and out of the opponents range to punish with a fast normal like 2MK or 5HP. The opponent has to be careful jumping as well, as Cammy's Cannon Spike is an incredible anti-air. If the opponent gets caught by one of Cammy's normals on the ground, she can often cancel into HK Spiral Arrow for good damage and a knockdown.

If Cammy can get a knockdown, her aggression is stellar. This is mostly thanks to her absolute best normal, cl.HP. This is a 3 frame normal, tying it in speed with very little besides jabs, and is a massive +10 on block. This allows Cammy to basically do whatever she wants after this, even if it gets blocked. She can even just repeatedly walk up and cl.HP again and again, threatening throw or DP or airthrow at all times. This becomes especially scary the moment she can build enough meter for a level 3 SDS, as a confirm into super gives her phenomenal damage and she has more than enough confirms into SDS.

Cammy's defense is no joke either, sporting plenty of amazing normals for mashing, a DP, a total of 4 throws, and a fast forward moving special to catch them trying to do things like 2MK > Fireball. Cammy is usually played in K or C Groove as well, and JD/Parry makes her very scary as a single one usually leads into a Spiral Arrow or level 3 SDS, turning the game in her favor immediately.

Despite her strengths, Cammy has two major weaknesses. The first and non-Groove specific weakness is her jump. Despite her powerful divekick, Cammy has a very slow jump that goes very high. This makes reacting to her jumps and anti-airing her simple, and makes jumping with her very scary. She also can't reliably punish some things with jump like other characters, but this is usually mitigated by her long reaching limbs. Her other main weakness is that she has one of the worst rolls in the game, if not the absolute worst. Slow and very reactable, Cammy in roll Grooves has to ignore the powerful defensive and neutral mechanic since she will almost always get punished. This hurts her viability in Grooves like A and N quite a lot. These both together means Cammy has to play a more patient neutral. She can't jump or roll in, so she has to get a whiff punish into a knockdown to start her offense. Luckily, she can do this easily while threatening a shockingly fast walk up.

If you can deal with playing around Cammy's weaknesses and playing into her strengths, she's an incredible powerhouse of a top tier. She plays a very simple footsies-style game, and especially in K Groove is a damage machine utilizing the powerful Rage mechanic. Learn your spacings, lab your links, and punish into knockdowns to start winning games with Cammy.

Cammy's combos are all very link heavy, and almost always end in 236HK or level 2/3 SDS. Spending meter on level 1 SDS isn't incredibly scary and, unless you're playing N-Cammy, tends to be a waste. Both meterless and super combos are in the same table, as basically any combo ending in 236HK can end in SDS. Every combo here was tested using Ratio 2 C-Cammy vs a full health Ratio 2 C-Ryu.

All combos are written in Numpad Notation, refer to this visual aide if you need help reading it. Any combo starting in j.HK can also start in j.214K. 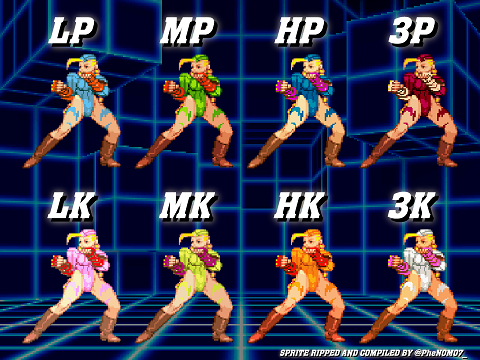