Rolento Schugerg is a German-American man with a patriotic passion for military. Early on in his career, he joined the Red Berets, an elite task force for the U.S. Military. Eventually, he left the team, selling himself as a mercenary. He was in multiple conflicts around the world, touring to places like South America, Central America, and working for questionably ethical groups like the East German Stasi. Eventually, his tour of duty ended during the Vietnam War, where he became disillusioned with the world and the state of politics. He began dreaming of a utopian society, for the military man, by the military man. He chases that dream throughout his many adventures in the Final Fight and Street Fighter story.

Rolento is a highly mobile rushdown and pressure character. While he lacks in any fullscreen zoning options, his stellar close range power with his fast walkspeed and amazing brawling normals allows him to lock opponents in blockstun for forever. Even just walking forward and doing repeated 5LP's is hard to deal with. Any confirmed hit can lead into his 236P Patriot Circle rekkas as well, giving him a great knockdown and a chance for a mixup. Rolento's offensive pressure is one of the best in the game, and even his neutral can be hard to deal with thanks to his fast mobility and long reaching buttons. He can also zone a little with his 623K Stinger knife tosses, and these are also very useful for pressure as well.

What holds Rolento back is his defense. Without roll cancelling, Rolento has no meterless reversal, and RC doesn't exactly give him a good one either. Rolento often has to commit to a big risk to get something invincible, and that can be both expensive and damaging should he miss it. While he can zone and play neutral decently, he doesn't exactly want to, and often has to stay very mobile to avoid being pinned down and punished. Keep yourself moving on the offensive, and evade the opponents attacks so you can lock them down and make them block for a long time to truly play Rolento.

Best - C/A: C-Rolento gives Rolento all he really needs: consistent access to supers, rolls, and a good defensive tool with Alpha Counter. His mobility is solid without run or hop, and his dash is very fast. While he doesn't get much in the way of level 2 combos, just being able to spend on supers consistently is good enough, and it means he can save it more for the next character or for an Alpha Counter if he needs it. A-Rolento gets much of the same tools, except instead of just consistent access to supers, he gets a very damaging Custom Combo. This puts his damage a lot higher, and makes his punishes a lot scarier. CC is also just a solid defensive mechanic on it's own, and gives him a real reversal option as well.

Useful - N/K/P: N-Rolento gets a lot more mobility using run and hop, which is sorta just a bonus on top of his already great mobility. His mixups are scarier with hop, and run makes his jab pressure strings even better. He also gets very consistent access to level 1 supers for reversals, and can roll cancel moves like Patriot Circle to punish errant fireballs. K-Rolento gets the same movement buff, but gets less access to supers. In trade, he gets Just Defend, which is useful for him as he can easily punish with a Patriot Circle combo after a good JD. He also gets Rage, which buffs his damage, and makes the threat of a level 3 Take No Prisoner super present, which is massive damage overall. P-Rolento is a bit less strong, but he gets good punishes off of pokes, and a parry gives him a solid knockdown. This is great for him as he can transition from a parry into his mixup well, and P-Groove having hops aids in that case as well. Lack of rolls or consistent supers makes his defense a lot weaker however.

Worst - S: S-Rolento loses out on a lot. Without charging, Rolento gets no access to any meter usage, and with no roll he can't RC for reversal or neutral purposes. Charging is a huge risk for Rolento as well, as he often wants to be staying mobile, and charging is the exact opposite of that. Run and hop help, but not enough to justify the loss overall, and the infinite level 1 supers is fairly useful but still not enough to make him worthwhile. 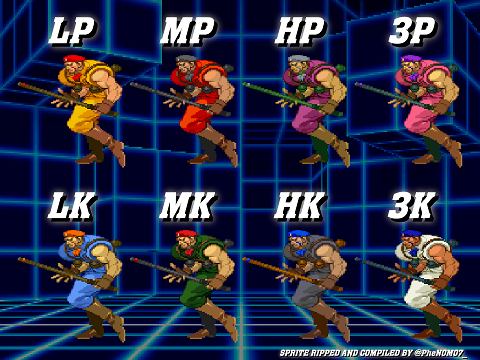