Joe Higashi is a champion Muay Thai fighter who's legend is just beginning. Born in Japan, Joe traveled to Thailand frequently to learn and improve at Muay Thai. Once he got skilled enough that he felt he was ready to start fighting others for real, he told his family he was leaving Japan for good. His grandmother gave him the headband he wears to always remember his homeland by. Immediately, Joe started making a name for himself. He became known as one of the most skilled Muay Thai fighters in the world. To further cement his reputation, he entered the first King of Fighters tournament in South Town, USA, ran by Geese Howard. There, he met the brothers Terry and Andy. Terry and Andy shared of their past involving Geese Howard, and Joe informed them about the tournament. The three together became fast friends after that, and Joe joined the brothers to help them make their revenge plot happen.

Joe stays in South Town, and travels with the Bogard brothers to compete in the various KOF tournaments with them. He still hasn't mellowed out, and swears one day to be the greatest fighter the world has ever seen. However, he seems more keen to just goof around with his buds and visit the bar sometimes.

When you hear "CvS2 Muay Thai based character with solid neutral, a good anti-air game, a good fireball, and damaging combos", Joe isn't the first character that comes to mind. However, don't let his overlapping fighting style with Sagat confuse you. Joe has a bunch of unique and fun tools to fight around with, using his solid pokes like 5HK, 5MK, 2MK, 2HP, and his useful 41236P Hurricane Upper's. Joe likes to play aggressive, tossing out his fast Hurricane Upper's, pressuring with his Bakuretsuken and the unique ability to cancel it for tons of plus frames, called Baku Cancelling. His 623K Tiger Kick DP is great, making consistent anti-airs, and his 41236K Slash Kick allows him to end combos with lots of corner carry.

What Joe has in great offense, he makes up for in zoning. Only the HP version of Hurricane Upper goes fullscreen, and despite how big they look, they can be jumped over quite easily. While he does have solid ways to anti-air and control the skies, he can't effectively make the opponent jump without being close enough to threaten a Baku Cancel or Hurricane Upper. Joe also lacks a bit in the mixup department, with no standing overheads and underwhelming grabs. Joe more or less punishes blocking by repeated Baku Cancels and Hurricane Upper pressure, which only really works in the corner, limiting him midscreen a ton.

Best - A/K: A-Joe has basically everything a good A-Groove character needs. He has plenty of useful roll cancels, like RC Bakuretsuken, RC Hurricane Upper, and even RC Slash Kick. His Custom Combo is easy and does decent damage, and he has plenty of ways to use it, with a unique one being linking a CC activation after a Baku Cancel. His Alpha Counter is pretty solid as well. K-Joe is the exact opposite. K-Joe gets much better mixup potential with run and hop, and a solid offensive and defensive tool in Just Defend. Rage buffs his damage by a notable margin, and lets him access his great level 3 supers. The damage buff from Rage overall is just very useful, however he pays for all this by losing roll, which can be a pretty major sacrifice depending on how you look at Joe.

Useful - N/C/P: N-Joe is a bit of a more versatile K-Joe. He keeps the run and hop, but also gets roll for RC Baku and RC Uppers. He also gets another guard cancel to use if he needs it with Guard Cancel Roll. N-Joe sacrifices any high damage ceiling he could get though. C-Joe gets access to a lot of the things A-Joe does, plus airblock. Joe does get some flashy level 2 combos, especially in the corner with his triple Tiger Kick combo. However, the damage just doesn't match up, and Joe would rather just have a Custom Combo or a flat-out level 3 super. P-Joe is surprisingly useful, as Joe's meterless punishes can be surprisingly good using Slash Kick. One good parry gets P-Joe close to the corner, where Baku Cancel and Hurricane Upper pressure becomes much more useful. Hop makes his mix a bit scarier as well. P-Joe, like the other 3 Grooves here, sacrifices high damage potential. Without consistent access to supers, P-Joe just can't match up.

Worst - S: S-Joe has the benefit of not being entirely reliant on meter, which is always good for an S-Groove character. However, that's about where the positives end. S-Joe lacks a roll for RC Baku or RC Upper, lacks any realistic access to supers since he has to charge, and will almost never have a level 3. Desperation doesn't help a character with lackluster level 1 supers either, as none of Joe's level 1 supers do much damage or give any sort of vortex potential like the best S-Groove characters do. He gets run and hop, but so does K-Joe and N-Joe. 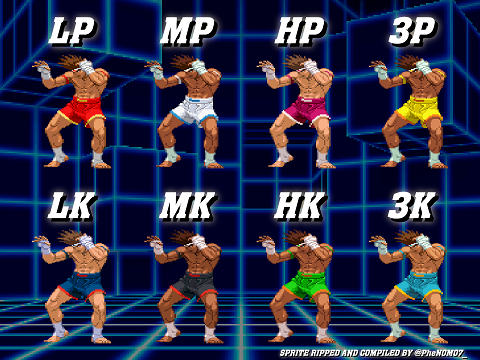