King is a highly skilled Muay Thai fighter, who defeated a legendary Muay Thai champion early on in her life. She's also notably masculine, and does this for various reasons, mostly to A. present herself as a man in order to get more respect as a fighter, and B. her own complex relationship with gender. King mostly took to fighting in the streets for money, as she needed to save for a surgery her little brother needed on his legs, but was defeated and humiliated by Jack Turner and his gang, who brought her to Mr. Big. At the time, Mr. Big was the crime lord of South Town, and employed King to be a bouncer at his bar. King would eventually find herself hired by Geese to kidnap Yuri Sakazaki in order to hurt the Sakazaki dojo. Once Ryo defeated her, and found out she was a woman, she told him about her need for money. Ryo convinced her to help him defeat Geese, and she agreed, freeing Yuri as well.

King nowadays fights in the various King of Fighter's tournaments, and is the founder of the popular Team Women Fighters, an all-female team of strong fighters. She befriended her previous victim Yuri, and those two made quick friends with Andy's girlfriend Mai Shiranui, forming the basis of the original team. King developed a deep crush on Ryo as well after he defeated her. In between tournaments, she runs a bar called the Illusion, with her two twin barmaids Sally and Elizabeth.

King is regarded as a very, very weak character in CvS2. She's either considered bottom tier with Kyosuke and Dan, or slightly above them. It's not that she has no good tools at all: in fact, she has a few good tools, like a solid fireball and one of the best rolls in the game. What holds King down is that she excels in no categories at all, having lackluster neutral, mediocre supers, weak pokes, no reversal, low health, and very little in the way of damaging combos. Her mixup game is essentially nonexistent, being almost entirely strike/throw with her normal throws and 2LK, and her best move for resetting pressure has the first half whiff on crouchers.

King has a few noteworthy strengths, namely her roll. She has one of the best rolls in the game, although it travels a relatively short distance. Her 236K Venom Strike fireball is standard but not the worst, and she can do 236236K for Double Strike, which shoots two fireballs out. She lacks a solid anti-air to compliment this, but with roll cancels, her 623K Surprise Rose and 421K Trap Shot become better anti-airs overall. She can rely on normal anti-airs as well with 5HK and 2HP, though these will lose against things invincible anti-airs would cleanly beat. King lacks anything besides neutral, and what she does have in neutral, others do better.

Best - C/A/N: All 3 of these Grooves have roll, which King almost entirely needs to succeed. C-King is likely her best overall Groove. While her supers aren't the greatest, they do make solid utilities, and allow King to threaten a reversal more often. A solid level 2 cancel will do good enough damage, and Alpha Counter gives her a defensive option. Airblock lets her escape more safely as well. A-King gets a lot of the same, but instead of having consistent access to utility supers, she has a Custom Combo. A-King's CC is fairly damaging, especially when done as a followup from her various specials, allowing her punishes to be a lot scarier. Sacrificing reversal super potential for reversal CC potential is your own choice however. N-King gets a lot more mobility and the potential for mixups, but axes any possible damage she could have since she only has level 1 supers. Still, she has everything else she needs in N-Groove, like her amazing roll. This also gives her a very powerful guard cancel roll for punishes. N-King is a more stable character to throw on point, though her stability is questionable.

Useful - S/K: S-Groove and K-Groove both immediately give up rolls, sacrificing one of King's best tools. S-King, in return, gets access to Desperation mode at low health, allowing her more opportunities to use her supers. While her level 1 supers aren't great, they're at least useful, and King is thankful overall for them. Charging leaves her open but smart use of charging when at King's best range isn't too unsafe. K-King gets the rushdown capability of N-King, but sacrifices roll in exchange for a more realistic damage ceiling using her level 3 supers. While these do good damage, the sacrifice of roll is questionable, and King gets very little with Just Defend.

Worst - P: P-Groove characters have to have solid meterless punishes to really excel. King doesn't even have solid metered punishes. P-King gets almost nothing that she needs to succeed: no rolls, no counter attack, no counter roll, no consistent super access, and even worse health and guard bar percentage. In exchange, she gets parries, which are incredibly low reward for a character with no damage. There's basically zero reason to play P-King. 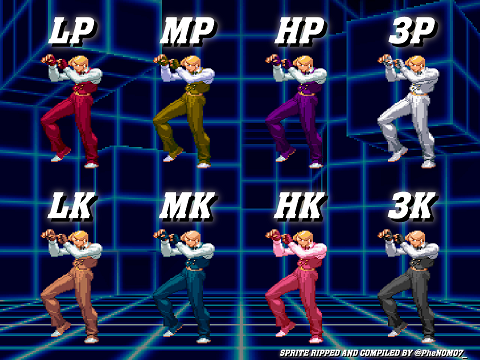