Chun-Li is an Interpol officer in the narcotics division from China. She's a highly trained martial artist, and is notable for being the female protagonist of the Street Fighter series and the first female fighting game character ever, debuting in the original Street Fighter II: World Warrior. Her father taught her martial arts at a young age, as he was also a highly trained martial artist and Interpol officer. One day, he disappeared, which launched Chun-Li into a passion for law. She became a detective at 18 before joining Interpol, becoming the main head of their Shadaloo investigations. She learned from her old teacher, Gen, that her father had been dealing with M. Bison before his disappearance. She confronted M. Bison, asking him what had happened to her father. Bison laughs, and quickly defeats her in combat. He says that if they ever fight again, he will kill her just like he killed her father, and he escapes away. Chun-Li is still hunting Bison to this day.

Chun-Li is a solid and neutral focused character. Her buttons make for great pokes and space controlling tools, and her high walkspeed and fast jumps let her position wherever she wants to. Buttons like 2MK, 2MP, 5MP, 5HP, and 2HK can keep the opponent out and give her a chance to confirm into her powerful super, Houyokusen. Her super is key to her gameplan, as it gives her massive damage and a very strong mixup afterwards. She also has a useful fireball for zoning, and her signature Lightning Legs for combos and pressure.

Chun-Li isn't without weaknesses. Her health is quite low, meaning that a few good hits spells the end of the round for her. This is exacerbated by her weak defense, as she has no meterless reversal and no safe super to reversal with. She has stellar jabs for mashing, but this is a risk still. She also struggles to get any meaningful meterless damage, as her specials aren't very combo friendly, and even when she can combo into them, none of her specials give her a knockdown.

Regardless, she's a powerful high tier character, especially in C-Groove. She likely has the best level 2 combo in the game, with massive damage and a powerful mixup afterwards that allows her to take rounds off any solid poke with meter. If you don't mind the weak meterless damage and below average defense, Chun-Li is a solid pick.

Best - C: C-Groove is easily Chun-Li's best Groove. Her level 2 combos with Houyokusen are likely the best C-Groove level 2 combos in the game, with massive damage potential and the chance for a mixup afterwards that leads into even worse situations for the opponent. C-Chun-Li can easily steamroll rounds away with meter. Roll Cancels aren't entirely important to her, but RC Legs are fairly strong, and rolls give her a powerful neutral tool and escape option. Alpha Counter and airblock aid her defense a lot as well, making her overall a lot more well rounded.

Useful - K/N/S: K-Chun-Li loses rolls for access to JD's, and Rage level 3 Houyokusen. One good JD with Rage can lead into massive damage and a mixup, and her neutral is still just as scary. Hop and run make her even more mobile as well, but the damage potential with Rage doesn't match up to the more consistent level 2 damage with C-Groove. N-Groove gets access to run, hop, and roll, alongside counter rolls which are useful escape tools. You can also basically always threaten a hitconfirm or whiff punish into level 1 Houyokusen, which isn't as high damage but is still a threat nonetheless. Lower damage ceiling and lack of any other really powerful tools holds N-Chun-Li back a bit compared to other Grooves however. S-Chun-Li is actually quite fitting, as Chun-Li can charge without much worry and infinite level 1 Houyokusen is very scary overall as every mixup afterwards leads into another super. S-Chun-Li has a great comeback factor, but has to deal with the weak mechanics of S-Groove.

Worst - A/P: A-Chun-Li is a much weaker version of C-Chun-Li. While A-Groove is still powerful, and her Custom Combo is no joke, her poking threat becomes much worse as she would always rather whiff punish into Houyokusen than use a Custom Combo. Everything else A-Groove has, C-Groove also has, and C-Groove has airblock as well. P-Groove is weak for a similar reason, as Chun-Li basically never has a super to make her pokes or punishes actually threatening. A good parry vs a P-Chun-Li with full bar will hurt, but it'll hurt less than a K-Groove JD with Rage, and hurt a lot less than a C-Groove level 2 combo. 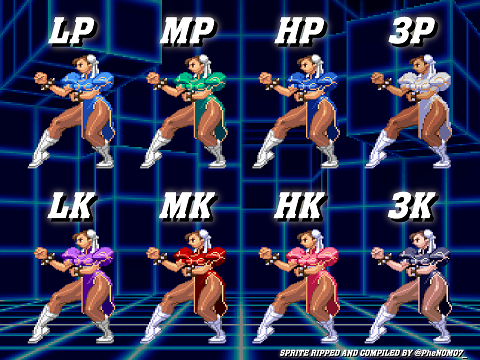