Kim Kaphwan is a Korean Tae Kwon Do master. He is strict, and has a deep love for the idea of justice through learning martial arts. He had been the reigning champion of the martial art for quite some time when he was invited to the second King of Fighter's tournament, hosted by Wolfgang Krauser. He ended up losing to Terry, and openly admitted Terry to be a better fighter than him. Since then, the two have maintained a healthy rivalry/friendship, with Kim frequently staying in South Town to aid Terry in whatever adventures he has going on. Kim eventually has two sons, who become his future students as seen in Garou: Mark of the Wolves. One day, Kim saw that a rampage had started when Chang Koehan had escaped from prison and none of the police could stop him. Kim, enraged at this, went to fight Chang himself. During their fight, Choi Bounge jumped out to help Chang. Even in a 2 vs 1 against two convicted serial killers who even the police couldn't stop, Kim dispatched the two with ease. Seeing the potential in his power, Kim began his infamous Rehabilitation Project, where he would take wanted criminals and teach them about Tae Kwon Do and his strict, justice-based worldview.

Kim is a rushdown oriented character with solid mobility and some good tools for pressure. His combos are simple and fairly reliable, though many of his specials require you to charge which can limit how he does them. He has great tools for playing neutral as well, between some solid close-range pokes, his [4]6K Ryuseiraku slide that hits low, and some great anti-airs like his [2]8K Hienzan flash kicks. 214K Hangetsuzan is a fairly annoying flip kick special that jumps into the air and gets Kim in, and his j.236K Hishokyaku divekicks are useful multi-hitting divekicks as well. He has a very unique special in 22K Hakikyaku, a low hitting stomp that can super cancel for big damage combos.

Kim even has a stance by doing 5HK or 22HK and then holding HK, with 5 different possible followups for the opponent to deal with. Setting it up over a knocked down opponent is a powerful way to use it, or even just threatening it after a blocked 5HK/22HK. However, what truly makes Kim as viable as he is would be his infinite. His 236236K Ho-o Hitenkyaku super launches the opponent for juggles, and by cancelling the level 2 version into a 22HK Hakikyaku, activating stance, and then kara-cancelling the stance LP into another 22HK, you can infinitely juggle them in the corner. With Kim's great rushdown ability, putting them in the corner isn't too hard, and if you can land this consistently you'll absolutely be stealing rounds. It isn't easy or damaging however, and you have to be in C-Groove with at least 2 bars of meter, limiting how you use it immensely.

Best - C: As stated above, C-Kim is the only Kim that can reliably access the infinite. This immediately puts C-Kim above the rest, as being able to perform the infinite is required at a high level. C-Kim does get other useful tools in general however, like an airblock to make his approach safer and a roll for RC specials. Kim's RC Hangetsuzan and RC Ryuseiraku can be very annoying in some situations. Consistent access to meter helps him in general as well, as it allows him to more often end combos in big damage and a knockdown without having charge. C-Kim doesn't get run or hop, but Kim has fine enough mixups and offense to live without them, though they definitely help. Even without the infinite, C-Kim is strong, and having consistent access to the infinite makes him even better.

Useful - A/N/K: If the stomp infinite was more easily available, A-Kim would likely outrank C-Kim. A-Kim actually has very good synergy with CC as a whole, and his CC does pretty good damage overall. He maintains all of the things C-Kim has except airblock as well. Sadly, you can't end a CC in the infinite (if you could, A-Kim would likely be a top tier), meaning it loses out to C-Kim overall. N-Kim gets more mobility for rushdown, and one of the better guard cancel rolls thanks to his fast roll. While ending in a level 1 super doesn't do much damage, being able to end in level 1 Ho-okyaku consistently helps Kim convert more often without charge. His level 1 Ho-o Tenbukyaku divekick super is great at calling out anti-airs and air-to-airs, however a level 1 Ho-o Hitenkyaku is essentially useless. K-Kim gets run and hop, but also gets a huge damage buff when in Rage, making his offense even scarier. A stomp cancelled into level 3 Ho-okyaku will do great damage, and level 3 Hitenkyaku allows for juggles afterward for high damage. Still, big damage doesn't match to an infinite, leaving K-Kim by the wayside.

Worst - P/S: P-Kim sounds alright on paper, but you have to give up charge in order to parry, meaining he rarely has a worthwhile meterless punish. In the rare instances he has meter, a level 3 super will do good damage, but it isn't an infinite. S-Kim has to give up neutral presence in order to charge for meter he really needs, and even then, a level 1 Kim super just isn't as threatening in neutral. S-Kim does get the ability to end with a solid knockdown and damage without charge every time when in Desperation, but it isn't as powerful as other S-Groove characters can be.

!!!THIS PAGE IS STILL A WIP. IF YOU NEED FRAME DATA NOW, REFER TO THE CVS2 BIBLE OR LOOK THROUGH THE EDIT HISTORY TO FIND THE LAST EDIT CONTAINING FRAME DATA IF THERE WAS ONE!!! 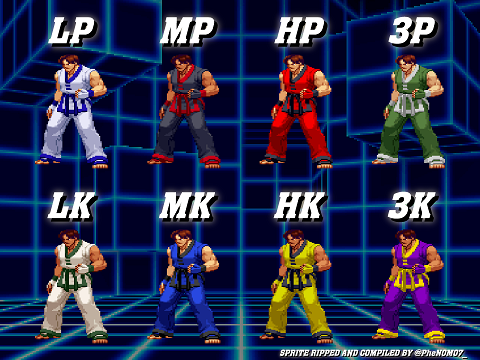