Nakoruru is a young girl from ancient Japan. She had a connection with nature from a young age, befriending her bird Mamaha for life very early on. One day, as she was playing with her sister Rimururu, Mamaha flew down to her with her fathers sword in his claws. Fearing for the worst, Nakoruru leaves Rimururu at home, and begins a journey to find her father. At the end of her journey, she learns her father was killed by Gaoh, and also learns of Gaoh's war. Gaoh was waging a war against Japan, and had plans to create a new country from the ashes. He was brutalizing nature along the way however. Nakoruru, disgusted at how he treated nature and killed her father, helped to fight and defeat Gaoh. Once he falls, Kamui appears in front of Nakoruru, and asks if she wants to follow in her fathers footsteps. She asks what will happen if she declines, and Kamui simply says that another young maiden would be chosen. Afraid that the other young maiden would be her sister, Nakoruru accepts, and becomes a Kamui Warrior of Kamui Kotan. Nakoruru acts as a nature protecting warrior for the rest of the series, appearing when great evil threatens the planet.

Nakoruru would likely best be described as a pixie character. Her small size makes catching her hard, complimented with her amazing mobility. She's fast on all fronts: great walkspeed, one of the better dashes, one of the best runs, and a fast jump. She can even jump onto her bird, Mamaha, with a 214K input. This allows her to freely fly around the screen, threatening solid air-to-airs, falling slashes, a burning projectile Mamaha, and an extremely fast divekick. This allows her to control the air very safely, as the opponent has to actively chase her down, putting themselves at major risk to eat one of her various followups. Nakoruru also has great normals for pressure and mixup, with plenty of plus frames and a great crossup.

She does have a few big weaknesses keeping her from being as strong as the top tiers. Namely two big ones: her health and her range. Nakoruru has very low health, and no meterless reversal. This means that smart use of her mobility and fast normals is important, as if you slip up, she can get hurt very badly. Her range is also very low, with no poke to make up for the massive range of top tier normals she has to fight. With these two put together, Nakoruru has to make smart use of her movement to evade the opponent until she can get in and run her pressure game. If she gets caught, she hurts hard, but she has every tool available to not get caught.

Best - K: K-Nakoruru is her most popular Groove, which makes a lot of sense. K-Groove fits characters with good mobility and solid punishes, and Nakoruru excels in both of those. Just Defend is great for her, as it allows her to block without taking pushback that would send her out of her optimal range quickly. Shorthop makes her mixups even scarier, and she has one of the fastest runs in the game. Rage juices her damage and gives her the ability to threaten her level 3 supers, though she lacks the ability to easily combo into them. K-Nakoruru has everything she needs, and is comfortably her best Groove overall.

Useful - N/P/S: N-Nakoruru has a lot of what K-Nakoruru has, but also gets a roll now. This lets her RC some specials, which can be incredibly annoying, especially RC Mamaha. She gets more consistent access to level 1's, which isn't too useful but it lets her use her healing super often so it may be useful depending on the opponent. The sacrifice of Rage's damage potential and the very useful JD holds N-Nakoruru down a bit. P-Nakoruru is a surprisingly decent P-Groove character. Nakoruru doesn't really need meter to win with, so only having it occasionally isn't the worst deal, and she has solid parry punishes. The range you land a parry can heavily decide what your punish is however, and the damage won't be amazing. S-Nakoruru is a surprisingly fitting character. Nakoruru isn't reliant on her meter, and when she gets infinite level 1's she can use healing super in a very annoying way. Charging sucks but she really doesn't need to do it, and she gets run and hop for maximum mobility. However, you still have to grapple with S-Grooves weak mechanics, making it a questionable pick regardless of how she fits in.

Worst - C/A: C-Nakoruru gets some useful tools, but C-Groove really works well with characters who can easily utilize their supers, and Nakoruru can't really do that. Airblock is useful for her escapes however, but it isn't worth the sacrifices like hop. C-Nakoruru gets to spend meter on Alpha Counters a lot however, which does help her defense a bit. A-Nakoruru is fairly similar. While Custom Combos can be fairly damaging, Nakoruru really doesn't utilize it well. Namely, she lacks any way to anti-air realistically with CC.

!!!THIS PAGE IS STILL A WIP. IF YOU NEED FRAME DATA NOW, REFER TO THE CVS2 BIBLE OR LOOK THROUGH EDIT HISTORY TO FIND THE LAST EDIT WITH FRAME DATA IF THERE WAS ONE!!! 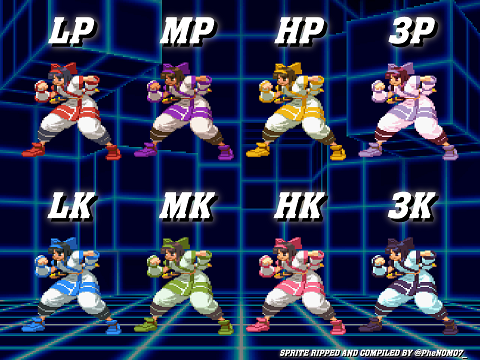