Terry Bogard. Poster boy of SNK and one of the most recognizable faces in fighting game history. He made his debut as the protagonist of Fatal Fury: King of Fighters, one of SNK's earliest fighting games and the first that majorly put them on the map. Since then, Terry has appeared in a ton of SNK games, advertisements, merchandise, and of course is a constant face in the King of Fighters. Terry himself is an All-American honest man. He's kind and strong, and isn't afraid to get into a fight here and there. In his original series, Fatal Fury, he was after Geese Howard for the murder of his adoptive father Jeff Bogard. However, after Geese's death, Terry took in Geese's son Rock Howard and raised him.

In CvS2, Terry is an easy all-rounder with some annoying tools and close range moves. His Crack Shoot is a powerful special that will absolutely knowledge check new players into the ground, and is still difficult to really stop at any level. His buttons like 2HK, 2HP, and 2MP are basic but very solid normals that allow him to poke a bit and safely approach. Burn Knuckle is a forward travelling special that can punish a lot of things but is very risky. While many of his tools may resemble your classic shoto, his fireball is a grounded one making it more suited for meaty pressure and close-range cancels instead of zoning. His anti-airs aren't bad, but his Rising Tackle requires you to charge and his best normal anti-air involves a 3 input. He lacks any close-range mixups as well, having no standing overheads and only normal throws, and his straightforward and predictable gameplan makes for similarly straightforward gameplans for your opponents.

Terry is a very simple fighter that has solid and reliable strengths alongside a great special in Crack Shoot, and respectable damage output with meter. He struggles with lacking diverse tools outside of Crack Shoot and his lack of mixups means that landing that hit is much harder to do. Solid buttons and good spacing are what make Terry work.

Best - K/N: Terry performs his best in K or N groove, and choosing between the two is important as they have noticable strengths over eachother. Most would agree that K-Terry is better, as Rage makes his damage output much scarier and consistent access to level 3 Buster Wolf makes moves like 2MP/2MK much scarier. Terry has many ways to confirm into level 3 Buster Wolf as well, so in general his close range becomes much better. N-Terry loses consistent level 3 access but in exchange has rolls. While it is a bit more gimmicky than the solid and reliable damage of K-Terry, N-Terry can roll cancel specials like Crack Shoot and Burn Knuckle to make them reliable punishes, especially against fireballs. Being able to make the already strong Crack Shoot invincible is a boon for N-Terry. Both grooves give him run and hop, making his weaker mixup game much more present and letting him land more hits.

Useful - C/A/S: C-Terry is also very popular, with very consistent access to meter for his supers. Buster Wolf already allows for followups, but level 2 Power Geyser is a bit scarier now. While he does lose hops, Terry's dash isn't bad at all and lets him utilize corpse hop mix after Medium Burn Knuckle. A-Terry is similarly strong, Custom Combo is a powerful mechanic for any character and Terry's CC is no joke. S-Terry is a bit more gimmicky but not bad on his own, as level 1 Buster Wolf racks his damage up and having infinite level 1 Power Geyser's makes his anti-air much better. Terry can also more safely take advantage of meter charge, as he already has to stay patient in neutral. S-Terry is mostly held back by S Groove and its lack of options.

Worst - P: P-Terry is easily the worst Terry. While he appreciates shorthop, parry isn't directly useful for him and having little access to supers is a big struggle, and the lack of any other powerful mechanics for Terry to use makes him very unfit for P-Groove. 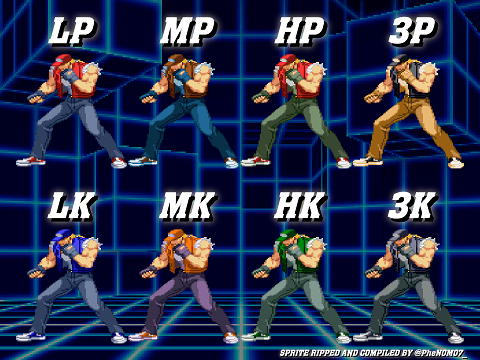