Ryuji Yamazaki is a Japanese yakuza who also happens to be one of the Heavenly Kings of Orochi on the side. Yamazaki was orphaned at a young age, and had to wander the streets of his hometown. He was miserable, until one day, he saw a Yakuza boss named Sorimanchi. Yamazaki decided to dedicate the rest of his life to becoming like Sorimanchi, and quickly began participating in the Japanese criminal underworld. He rose the ranks quickly, and soon he became one of Sorimanchi's personal bodyguards. This was the happiest time in his life, as he felt Sorimanchi was a surrogate father figure for him.

However, on a business trip to Osaka, Yamazaki started to get a funny feeling. They were ambushed by a rival gang, and Sorimanchi was kidnapped. They would go on to brutally torture and kill the man Yamazaki saw as his idol. This snapped Yamazaki's fragile mind in two, causing him to become obsessed with violence. He immediately took revenge on Sorimanchi, murdering the boss who ordered his death, and fled to Hong Kong. From there, Yamazaki doesn't remember much. When the KOF series starts picking up, Geese sends Billy Kane to force Yamazaki into joining. Billy took a few goons with him for protection. Yamazaki refused to join, and a fight broke out. After Yamazaki brutally maimed one of the guards, the Orochi blood in him began pulsing, and he decided to join. At the end of the tournament, it is revealed that Yamazaki is actually one of the Hakkeshu, or Heavenly Kings of Orochi. However, Yamazaki's own tormented psyche keeps the power of Orochi at bay, and Yamazaki doesn't really want much to do with the Orochi clan in general.

Yamazaki is a neutral-oriented zoner style character. He has plenty of great tools to control neutral with, from his simple normals like 5HK to his 214P Serpent Slashes, which can be angled depending on strength to cover different parts of the screen. He has plenty of ways to poke, anti-air, and punish from far away. His aggressive potential is also quite high, with high damage combos using his 214K Spray Sand, which cancels into Serpent Slashes, or his 236236P Drill combo ending super. Yamazaki also builds a lot of meter because of the aforementioned Spray Sand cancels, and whiffing Spray Sand in general builds notable meter, making Yamazaki an amazing point on C/A-Groove teams. His mixup is surprisingly potent as well, with an overhead command normal and special, and a command grab.

Yamazaki lacks much in the way of knockdowns, and can also struggle hard on defense. He lacks any reversal for escaping pressure, and even with Roll Cancels, none of his specials exactly excel at this. Yamazaki has to keep opponents out and away to win, but he is much more than capable of doing that consistently, and punishing you with big damage as well.

Best - A/C: A-Yamazaki is a beast of a point character. His meterbuild is stellar, you basically guarantee that your mid character with have a CC ready on entry. Yamazaki's own CC is fairly good as well, though somewhat difficult. He can play around saving the meter, keeping himself safe, and activating when he knows he has the punish for big damage, then building meter for another CC. C-Yamazaki is fairly similar, although he gets a few new tools. The cheaper Alpha Counters gives him a way to escape out of pressure, and again, his meterbuild makes it even more worth considering. He also gets more consistent damage using level 2 Guillotine and cancelling it into Spray Sand xx Serpent Slash or a level 1 Guillotine. Yamazaki has very good RCs.

Useful - S/N/P: S-Yamazaki is a great point character again. He doesn't have much reliance on meter, but thanks to his oppressive zoning, charging is actually fairly safe with him. When in Desperation he can end every combo in a level 1 Guillotine for a knockdown and a mixup, and that mixup can involve his super command grab Drill. N-Yamazaki is, again, a great point character for his meterbuilding potential. He gets to use guard cancels more often, and has guard cancel roll as well. Run and hop give him more mixup options and make his aggression scarier in general. Activating Max Mode gives him a small damage buff as well, which can be helpful. P-Yamazaki gets to parry into low damage but amazing meter gain, and that can be important for a P-Groove team where your mid can come in with a full bar. Even Yamazaki himself can parry into a level 3 Guillotine for solid damage once or twice a round.

Worst - K: K-Yamazaki has a lot less going for him. His amazing meterbuild is gone entirely, and while JD isn't useless, he doesn't get the greatest punishes from it. Yamazaki also prefers to be the one pressing buttons, not trying to interrupt the opponents buttons. When Raged, he does have higher damage, and his mixup is scarier overall. However, it just isn't worth it for such a defensive battery character. 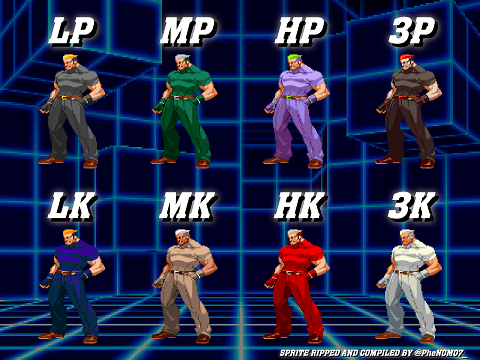