Akuma, called Gouki in Japan, is one of the most powerful warriors in the Street Fighter universe. He is emotionless, and trains hard to master the dark power known as the Satsui no Hado. In his younger years, he trained together with his brother Gouken under a master named Goutetsu who taught them a nameless fighting style made for killing. They also learned the Shun Goku Satsu, usually called Raging Demon, which is a life-threatening move with notable strength. As Akuma and Gouken learned, they began to dispute over the true nature of their learnings, with Gouken unable to accept the Satsui no Hado and the violent nature of what they learned. Gouken left to create his own dojo with what he learned, while Akuma continued to train under Goutetsu and accepted the emotionless nature of Satsui no Hado into himself. Akuma left to train on an island alone to learn the Shun Goku Satsu, and while there, gave in fully to the Satsui no Hado. He became inhuman, obsessed with fighting to the death. When he returned, he challenged his master to a death match, which he won. His master died happily knowing he had trained such a powerful pupil, and Akuma still wears his masters prayer beads around his neck to this day.

In CvS2, Akuma is a glass cannon rushdown character. Akuma has powerful rushdown and mixup capabilities, especially in Grooves where he has a run and hop. While he possesses the same basic kit as the other shotos, Ken and Ryu, most of his tools are more geared towards high damage combos and great ability to maintain knockdowns. His normal fireball can knock down when close, and his red fireball knocks down at any range. His air fireballs don't stall or change his air momentum, and have very little landing lag allowing him to combo after them. He also has great neutral, with a powerful DP anti-air and useful normals for close range poking. All of these tools give Akuma a very simple gameplan that he can apply in many ways: get a knockdown, maintain your pressure, and loop mixups until they die.

Akuma has one massive issue however, which is what makes him such a glass cannon. His health is the lowest base health value, only beaten by Claw without a mask, and his stun is the absolute lowest in the game. This means that if the opponent escapes his onslaught long enough to put him on the backfoot, it can very quickly spiral into a loss. While he does have two reversals in his DP and his teleport, these can be baited and punished for huge damage. Just like a few wrong guesses gets Akuma the win, a few right guesses from the opponent means Akuma will always lose. His matches will almost always be heavily one-sided because of this, but when Akuma wins he wins convincingly.

Best - N: Akuma has one Groove clearly above the rest with N-Groove. N-Akuma has everything he needs, from run and hop to easy access to roll cancel specials, and a way to store his level 3 Raging Demon and hide the input for scarier mixups using the animation for activating Max Mode. Max Mode in general makes him scary, as his damage gets much higher, and the threat of a Raging Demon command grab mixup means the opponent will be scared into getting hit more often. Akuma also benefits from rolls, and guard cancel roll is a very powerful defensive mechanic that can help turn the tides back in Akuma's favor.

Useful - K/P/C/A: K-Groove Akuma is slightly behind N-Groove. K-Akuma maintains the scary mixup and mobility of N-Akuma, and Rage makes for a similar situation to Max Mode where he has the threat of a Demon to let him land more hits. Rage also increases the damage more than Max Mode, making it a bit more powerful. K-Akuma gives up rolls and the defensive guard cancel roll or offensive roll cancel specials however, and K-Groove meter only builds when getting hit or performing a JD, making it harder for K-Akuma to build enough meter without risking his life. P-Akuma makes a pretty large mobility sacrifice, but in exchange gets parries. With one good parrry, P-Akuma can turn the tide in his favor using a tatsu combo, and while he won't always have a super and will basically never have Raging Demon, he doesn't entirely need them to succeed in P-Groove. Lack of run and any defensive escape hurts however. C-Akuma and A-Akuma are both right behind K-Akuma, with both making a major sacrifice with no run or hop in exchange for high damage level 2 combos in C-Groove or powerful Custom Combos in A-Groove. Lacking run or hop really hurts C-Akuma and A-Akuma however.

Worst: S-Groove is the worst Akuma, as S-Akuma has to actively give up space and aggression in neutral to build any meter. S-Akuma also only gets access to a Demon at low health, which is a massive risk for him, and the infinite level 1 supers don't exactly give him much more than damage increases in combos. Akuma has a lot of juggles possible, but these are the most basic and realistic. With his 214LK, 623P ender, you should always do 623LP since even though it does less damage, it gives much better okizeme. The damage loss is minimal anyway. ALL TATSU COMBOS WHIFF ON CROUCHING CHARACTERS so you should be able to recognize when an opponent is standing or not.

Akuma sometimes has a hard time getting close to opponents with good pokes. There are a variety of different ways to earn your position, but he doesn't have any of the "One button" strategies like the top tiers have. In other words, there is no magical crouching fierce or standing roundhouse to get the job done. It requires a bit of work, and a bit of luck.

Not quite as much range as a MK, but this one knocks down. Use for punishment and whiffs. Much like the buffer into fireball trick above, buffer this move into a lk hurricane kick. The RH -> Hurricane Kick can be followed up by a dragon punch.

Not good if they are expecting it, but good for punishment and whiffs. Scores a knockdown if it hits. Good chip/Guard Crush damage if it is blocked. Don't throw these out predictably unless you want to eat an RC or a Jump in combo.

Nice distance, good for punishing low jumps and jump ins. Will beat out a handful of low pokes.

This is one move you MUST learn in order to play Akuma. In A groove and C groove, this is possibly the most important aspect of his footsies game due to his lack of mobility. The concept of "Tiger Kneeing" a move basically means that you do a special move as close to off the ground as possible. It comes from the fact that in SF:Championship Edition, Sagats "Tiger Knee" move was d df f fu + kick. This is the same motion you need to do for his fireball. Input D, DF, F, FU + Punch. Akuma will leap off the ground and throw an air fireball instantly. For best results, use MP or LP fireballs, as the FP fireball is generally too fast.

With Akuma, you really need to get close and deal some damage. Luckily, he is provided with a lot of mixup options to help you get the job done. You need to think Rushdown with Akuma. Rushdown implies the fact that you are constantly keeping the pressure on your opponent, forcing them to make quick decisions and take big damage if they guess wrong. It is basically the opposite of turtling.

1) Step one in a basic match is to score a knockdown. How can he do this? Well, he has a few options

The goal is to score the knock down, then run in close over the opponents body, and set up stage two.

2) Step two, now that you're standing over the opponents body, throw in some mix ups. Again, he has a few options.

From here, if you succeed, then step 2 loops back around to itself. You should still be over their grounded body. If not, go back to step 1 and score another knockdown.

When you work so hard to set up your opponent after a knockdown, the last thing you want is to have them quick roll your way out of the setup. Luckily, every setup listed gives you ample time to recover before your opponent. The answer to this is simple if you are in a run groove: Simply run up to your opponent after every knockdown. If you see them quick roll, just do c.lk -> Punishment of your choice. If they don't quick roll, then go into your mixups (c.lk, lk hurricane kick, stop -> throw, etc). You should be able to control the flow of the match very effectively with this tactic. Because of this, you should WANT the opponent to quick roll, as it results in free damage for you.

Akuma thrives on juggling with his dragon punch. Every version hits 3 times. However, the damage of the 3 hits is greatly different. On the LP uppercut, the damage is 1000 for the first hit, 400 for the second, and 300 for the last. Therefore, when juggling, it is in your best interest to juggle with the FIRST hit. Thus, the later the juggle, the better.

As well, it is best to juggle with the lp version, since it only does 200 damage less than the FP version, but leaves you in a major advantage standing over their grounded body.

Firstly I'm gonna exclude dizzy comboes as they aren't really practical IMO, as well as comboes that start with 'jump straight up qcf+lp, then tigerknee qcf+hp' and the like for the same reason.

Also, although these all start with 'j.hp, c.hp', that's not the only way to land them. That's the best way to land them as you get the most damage out of it, but you won't get a free jump in that often. When they're dizzy though go for it ;). More practically though you can replace the 'j.hp, c.hp' with 'c.lk, c.lk' or 'c.mk' to start any of these.

Here are some of C-Groove Akuma's most damaging combos in a variety of situations.

NOTE: Those last two have a hole in the combo between the lvl2 super cancel and the grab off the demon flip. Each of them is actually two comboes. The point of listing this is that 9.99993% of players getting hit with the traditional lvl2 combo will either:

This means that if you cancel the lvl2 into demon kick and command grab them, they will NOT react in time to you doing so. Hence they will get grabbed and you can continue the combo as listed.

These two do more damage than the traditional lvl2 cancels, but are risky. They are to only be used extremely scarcely as gimmicks in casual, or if you know that you only need 100 more damage to kill off a character. In which case they can be used. Generally though do the first 4, as the more consistent you are with them, the less they will expect the mixup ones.

Anti-Air a move with a Dragon punch that only hits with one hit (i.e. you hit them high). When you land, run forward a little and do another dragon punch, this will allow you to land 2 more hits. Only works in run grooves, though sometimes they are "Deep" enough to not need to run forward a bit.

A lot of Akumas power comes from the fact that one mistake the opponent makes can lead to big damage from his Raging Demon. Akuma luckily has a lot of way to set up these guessing games, and land his raging demons for huge damage. 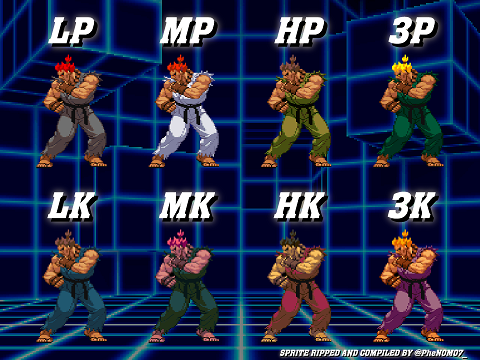