Benimaru Nikaido is many things. He's the son of a rich family, with a Japanese father and American mother. He's a star of the fashion world. He's Kyo Kusanagi's friend and rival. He's an electric wielding martial artist with powerful kicks. Most importantly, though: he's gorgeous. He keeps his hair styled and straight using his electric abilities.

Benimaru in CvS2 is widely regarded as one of the worst characters for a variety of reasons. His health is very low, and his damage output without meter isn't much better either. His longest range options pose no threat to most characters while not even really having that much range. His anti-airs are only strong when you add roll cancels behind them as well. On top of all that, he has one of the absolute floatiest jumps, making anti-airing him a breeze even with his divekick. If you plan on using him, have one or two top tiers on your team to help out, cuz he won't be doing much.

While he has a lot holding him back, Benimaru does have a few strengths. His mixup and general close range game is fairly strong, with lots of ways to generate frame advantage and many strong normals for interrupting opponents trying to escape. His mixup is powerful too, especially with meter, since he can access his level 1 Electrigger command grab which is a damaging 1 frame grab. The fear of being grabbed will make opponents move around and try to escape more, which is when you can take advantage of his strong close-range normals to catch them moving and hopefully secure a knockdown. Beni also doesn't lack in having lots of combo potential, with lots of links for long confirms and a super with very lenient juggle properties. He isn't the scariest close range brawler by any means, but he has a few tools and tricks to keep himself in the game and make the opponent think twice about not learning the matchup.

Best - A/N: A-Benimaru gets access to the powerful mechanics of A-Groove, namely Custom Combos. Benimaru's punishes are lackluster, but his CC isn't, and the threat of a CC punish makes him a bit scarier. Activation mixups become a big part of his gameplan as well, mixing between his command grab and activating CC. He loses access to his supers however, which hurts a lot. N-Benimaru makes up for this by having plenty of level 1 supers, making his damage and mixup a lot more stable between his Rai-Kou Ken and Den'ei Spark, and his frame 1 command grab Electrigger. The better movement helps a lot as well, as Benimari is slow and floaty in general. However, without meter, N-Benimaru still has weak punishes. Both give him roll, which he needs desperately to make his anti-air game better and to make his defense a bit stronger.

Useful - S/C: S-Benimaru is surprisingly useful. Benimaru already has lacking damage in general, so the lack of super doesn't really matter to him much. Once Benimaru does hit low health, infinite level 1 Electrigger mixed with his other infinite level 1 supers makes his strike/throw game much scarier overall, and ups his damage a lot as Rai-Kou Ken juggles in the corner do surprisingly respectable damage. The enhanced movement also helps him quite a lot. Still, he has to contend with S-Grooves mechanics overall, which holds back what would otherwise be his best Groove. C-Benimaru gets access to his supers a lot more often, and a solid defensive tool with Alpha Counters. Air block helps with his horrible jump as well. The lack of movement and his still underwhelming super punishes makes it a worse pick than A-Groove however, and more importantly, Benimaru cannot abuse level 2 cancels: Den'ei Spark causes a hard knockdown, Electrigger can't be combo'd out of, and Rai-Kou Ken already allows for juggles, although now you can get three of them.

Worst - K/P: K-Benimaru is pretty bad. Lack of rolls immediately hurts, as his anti-airs become incredibly inconsistent and his defense is weakened. JD isn't very strong, as his punishes aren't that great, and only having one super is worse for Benimaru who would rather have multiple level 1's than one level 3. Rage is a decent buff, but it turns weak punishes into mediocre ones, and isn't worth the super loss overall. P-Benimaru is similar to K-Benimaru, but has even less tools. Parry is meaningless on a character with such weak meterless punishes, you'll rarely have a super, and you have no defensive options to help you out. P-Benimaru is essentially useless, go with any other Groove. 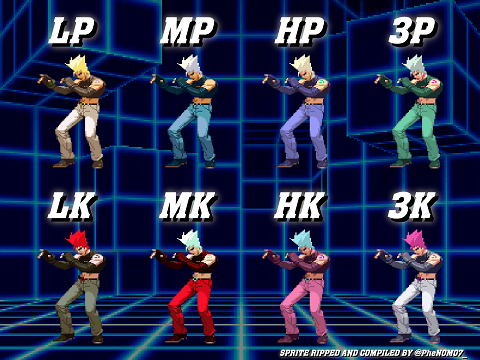