Dhalsim is a powerful Yoga master. He is capable of stretching his body out to immense lengths, and conjuring fire from his mouth. He can also teleport, and later on learns how to float. He starts out fighting to raise money for his village, as he cares deeply for those who live there. Although, he has to contradict his natural pacifist beliefs. Throughout many of the games, he finds himself conflicted between his pacifist lifestyle and having to use his great powers to fight for his village. After the events of Street Fighter II: World Warrior, Dhalsim retires from fighting. That is, until S.I.N. in Street Fighter IV builds a dam that bars water from getting into Dhalsim's village. He is once again forced to choose between his pacifist beliefs and the need to fight.

Dhalsim is the original long-arms zoner. He has stretchy normals that allow him to cover plenty of angles, but has to carefully pick and choose which one he needs for what situation, as they all hit at specific and precise angles. While Dhalsim is infamously powerful in other games like Super Turbo and Alpha 2, CvS2 Dhalsim is quite underwhelming. Many characters are dominant in neutral already, and his extended hurtboxes end up hurting him a lot more. His weak defense makes Grooves with hop and run dismantle him, and he struggles to properly zone them at all. His normally powerful fireball is beaten out by CvS2's roll cancel glitch, as are many of his zoning tools in general, and his offensive mixup is much worse than normal. Overall, Dhalsim is a low tier that has to win neutral every single time in order to win.

Dhalsim does still have very powerful zoning tools however. His normals, namely ones like 5LK and 5HP, control a bunch of grounded space. 5HK and 4MP are great anti-airs, and his divekicks help him be aggressive and mobile. He has fairly useful supers for zoning and chipping. He has a risky but strong reversal in his teleports, and it can be hard to properly punish them as well. Dhalsim has powerful neutral tools, but not much else. You have to win neutral more than anyone else to win, and one time of losing it can spell the end. You can be winning for the majority of the match, but one good hit from the opponent can spell your doom.

Best - C: C-Dhalsim is the best Groove for Dhalsim, plain and simple. Airblock makes his horrible floaty jump a lot safer, lots of access to his supers makes his damage, reversal, and chip out game a lot more solid, and Alpha Counters give him a MUCH needed defensive option. Roll cancel lets him RC his fire specials to make them much harder to contest and much more annoying in neutral. While his roll isn't great, it can be appreciated as a risky escape tool. C-Groove gives Dhalsim the defensive options he needs and lots of access to his supers: all that he needs to perform well.

Useful - A/S: A-Dhalsim is a bit of a lesser C-Dhalsim. Losing airblock hurts a lot, but you get Custom Combo in return. While this isn't necessarily a bad trade, Dhalsim's CC isn't the greatest, and he would rather just have his supers. Still, you get the basic defense of C-Groove plus a decent reversal combo tool with big damage potential: it could be a lot worse. S-Dhalsim is a lot more gimmicky. While charging doesn't actively hurt his gameplan, getting hit while charging can end the round for Dhalsim. He has no access to supers for a majority of the round, which doesn't hurt too bad, but at low health having infinite level 1's makes him a bit scarier.

Worst - K/N/P: K-Dhalsim is strange to play. Dhalsim having run and hop isn't as beneficial to his gameplan as you might think, since his offense isn't very rewarding for how much risk it carries. Rage does make his normal poke strategy much scarier however, and a good punish into a level 3 still hurts, so K-Dhalsim with Rage has some merit. N-Dhalsim is a worse version of K-Dhalsim. His level 1's are solid but not good enough to live on just level 1 supers alone, and he doesn't have a good enough RC special for N-Groove. P-Dhalsim is the worst way to play him. Dhalsim has very weak punishes, meaning parries do very little, though he can almost always at least punish thanks to his range. Only having roughly one level 3 super per round hurts, and the lack of any other good options is a major sacrifice.

!!!THIS PAGE IS STILL A WIP. IF YOU NEED FRAME DATA NOW, REFER TO THE CVS2 BIBLE OR LOOK THROUGH EDIT HISTORY FOR THE LAST EDIT CONTAINING FRAME DATA IF THERE WAS ONE!!! 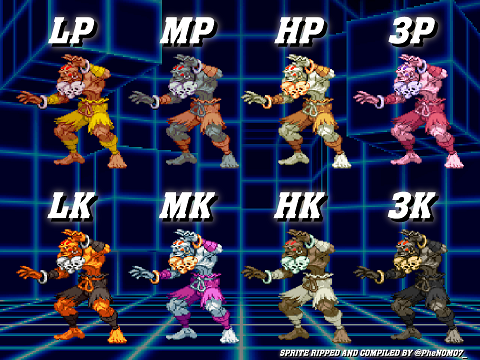