Ryo Sakazaki is the son of Takuma Sakazaki, master of Kyokugenryu Karate. As such, Ryo inherited his fathers passion, and became the new modern day Kyokugenryu master. He teaches Kyokugenryu at his local dojo, alongside his rival and best friend Robert Garcia and his little sister and martial arts prodigy Yuri Sakazaki. He lives in the same town as Terry, South Town, and was around before the events of Fatal Fury. In fact, his debut game, Art of Fighting, is one of the earliest in the broader SNK timeline. It tells the story of Yuri being kidnapped by Geese Howard, who was just starting out at the time, and how Ryo and Robert fight King to rescue her. Ryo is also the very first and original champion of the King of Fighters tournament, and the first fighting game crossover character in history when he became a secret boss in Fatal Fury Special.

Ryo, on the surface, is very similar to the Capcom shotos. For the most part, he plays like them too. However, he has some unique tools, like an air fireball that can end his combos, a launcher special for fun resets, and a charge kick move for combos. He also has very strong level 3 supers, with a powerful fireball super in Haoh Sho Ko Ken and a great rush super in Ryuko Ranbu. He has a special level 3 with Heaven Glaze Punch, which is an unsafe and long startup super that does massive stun if it hits. Ryo works best in neutral, like any good shoto, throwing fireballs and using his good normals and DP anti-air to control space.

He does suffer some weaknesses however. He is much slower than the average shoto, with a low overall jump arc and a slow dash and run. This forces him to rely on his neutral more, and his fireball more. While he does have a solid fireball and plenty of ways to deal with people who try to challenge his fireball, CvS2 has roll cancels. These can blow up fireballs on a solid read, and forces Ryo to be very thoughtful about applying his strongest tool.

Ryo is a shoto, but takes the archetype and spins it a bit more than the main three shotos do by having more unique specials and different weaknesses. If you like solid fireballs, good neutral, and don't mind a slow or meter hungry guy, Ryo is a good pick in the right Grooves.

Best - K: For the most part, you'll usually see Ryo in K-Groove. Rage ups his damage from pokes and fireballs, and access to his scary level 3's makes for a solid neutral powerhouse type character. JD gives him a good way to deal with opponents zoning, and a way to generate a ton of Rage meter without needing to get hit. Run and hop aid his low mobility and give him shorthop HK, which is one of his best moves.

Useful - C/N/S: C-Ryo is right behind K-Ryo. While he sacrifices a lot of mobility and the poking and comeback power of Rage, C-Ryo gets a lot more access to his useful supers. He also has versatile uses for level 2 cancels, mostly from level 2 Ranbu. The loss of mobility hurts a lot, and makes C-Ryo play even more patient than before, but he does get roll cancels which are always nice. N-Ryo is the opposite, getting all the mobility of K-Ryo and even rolls but losing easy access to his powerful supers. S-Ryo is surprisingly useful, as he plays slow enough that charging isn't too bad, and infinite level 1 Haoh Sho Koh Ken is as funny as it sounds. He gets run and hop too, but still has to contend with S-Grooves weak overall mechanics.

Worst - A/P: A-Groove gives Ryo access to Custom Combos and some of the more powerful subsystems like Alpha Counter, but still lacks mobility, and you'll never be using a super as you would always rather Custom Combo. P-Ryo is very weak, as Ryo doesn't have the greatest meterless punish game without charge, and you'll rarely have super if at all. His crouching and standing medium punch has excellent priority and can be linked into moves.

The jumping fireball should only be used while jumping forward as after the fireball is cast - it delays Ryo landing on the ground, its quite good when you predict your opponent is going for some obvious anti air attack since you can catch them while it is starting up

Zannretsuken can be used to catch people who are too obvious with their rolls or jumps but otherwise shouldn't be used.

His dragon punch has average to low damage and in a lot of ways is like super turbo guile's flash kick, it comes out quick and finishes quick so its not entirely ideal as an anti air, his standing heavy kick is far better as a anti air. It's good if you want to land a knock down, the light punch version should be the only version used.

Kyokugenryuu Renbuken can be super jump canceled and most players who do this follow up with jumping heavy punch. 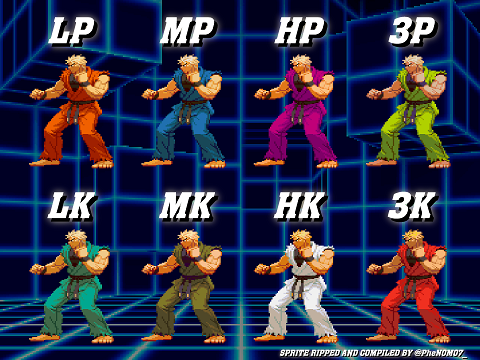