Yuri Sakazaki is the younger sister of Ryo Sakazaki, and the first female practitioner of Kyokugenryu Karate. She is a bit younger than Ryo, and as such, their father Takuma favored Ryo to be the heir to the dojo. However, after their mother dies in a car crash, Takuma feels his family is under attack. He disappears to try and fix the problem, missing much of his childrens early life and leaving Yuri to be raised by Ryo. Takuma would go on to work for Geese in order to protect his family. At 17, Yuri was kidnapped. Ryo and his friend Robert Garcia set out to go find her, before learning she was held by King. The two continue on to fight Mr. Karate, one of Geese's most powerful henchman. After a grueling fight, they learn that Mr. Karate is actually Takuma! Together, they all defeat Geese... for now.

In the King of Fighters, Yuri has become much more confident in her ability to fight after Takuma started teaching her in private. She insist on joining the tournament with Ryo, but Ryo feels it's too dangerous. So instead, she sneaks out with Mai Shiranui and King to form Team Women Fighters and enter without Ryo's knowledge. Since then, she has excelled at learning quickly, taking moves from a variety of opponents and remixing the Kyokugenryu style. Still, her headstrong nature gets her in more trouble than anything, and she often ends up losing because she had too much fun.

On the surface, Yuri may seem to resemble Sakura, one of the most dominant top tiers in the game. This falls apart quickly however when taking a closer look at Yuri. Outside of solid buttons, Yuri has very little going on for her. Her damage is very low overall, and her health matches. What tools she does have are solid pokes, good RC's, and a few unique tools for a shoto. Her 214P Saiha is a +2 on block special that works as a stellar meaty, especially when roll cancelled. Her 623P Yuri Chou Upper's are solid uppercuts, and the heavy punch version has a followup by doing another 623HP. Her 236P Ko-o Ken's are similar to Yuri's short range projectiles, and when roll cancelled are also annoying pokes in the same way.

What makes Yuri struggle is a lack of anything unique and outstandingly powerful to make up for her poor damage output and low health. What tools she does have, much more stable characters have better versions of, and everything else she has isn't good. She relies on smart footsies to win, and her reward is always going to be much lower than others for winning footsies. If you like Yuri, be ready to play a very bad character, or look at Sakura instead.

Best - K/A: Yuri desperately needs better damage, and K-Yuri with Rage gets just that. While Rage is a temporary buff, it's a heavily appreciated one. Just Defend is fairly useful for her to contest and punish some of the best pokes and pressure, but Rage is the big thing here. Even K-Yuri has to make a sacrifice however. She lacks a roll, meaning RC Saiha and RC Ko-o Ken aren't options she can use at all. A-Yuri gets the aforementioned rolls, making her pressure and poking capability a bit better. The big benefit here is Custom Combo. While she doesn't have the most damaging one, it is still notable damage, and it is very easy to perform. She has lots of ways to use it too, like after a Saiha or Ko-o Ken in the corner.

Useful - N/S/C: N-Yuri is essentially a lesser K-Yuri. With N-Yuri, you're immediately sacrificing damage potential. In exchange, you get run and hop, and also get to keep roll. This can make Yuri a bit more aggressive, and is a worthwhile pick in some situations. S-Yuri is a gimmick like any S-Groove pick, but not a bad one. Infinite level 1 supers lets her spam her 641236P Ha-o Sho Koh Ken fireball, solidifying her zoning a lot more. C-Yuri gets to end in supers a lot more, and a level 2 cancel does decent damage as well. This also allows her to easily save up for another level 2, solidifying her damage more.

Worst - P: P-Groove relies on solid meterless punishes and characters who don't directly require meter. Yuri is neither of these things. While a parry can usually lead into a Double Chou Upper, it won't always since Yuri doesn't have a great ranged cancel, and even when she has meter the damage is underwhelming in comparison to other P-Groove characters.

!!!THIS PAGE IS STILL A WIP. IF YOU NEED FRAME DATA NOW, REFER TO THE CVS2 BIBLE OR LOOK THROUGH THE EDIT HISTORY TO FIND THE LAST EDIT CONTAINING FRAME DATA!!! 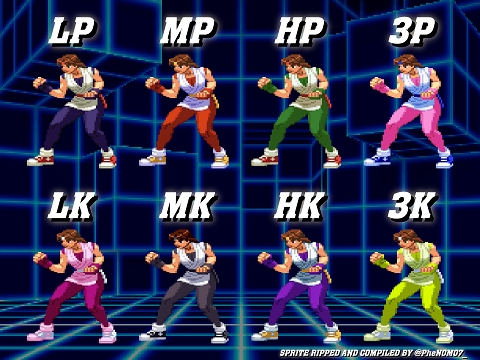