Rock Howard is the biological son of Geese Howard. Geese didn't help raise Rock at all, leaving Rock's mother Marie to care for him. They lived a fairly modest and simple life, and while Rock knew of his father and who he was, he never met him. When Rock was seven years old, his mother contracted a very serious illness. He tried to nurse her back to health, but being a young child, there wasn't much he could do. In a last-ditch attempt to save her, he went to Geese Tower to confront his father. Despite Geese's immense wealth and Rock's begging and pleading, Geese sent him away, wanting nothing to do with it. When Rock returned home, his mother had passed away. Rock would never forgive Geese for this, holding a permanent grudge against his father ever since.

Rock isn't the only person with a grudge against Geese however. While he was still fairly young, Terry would send Geese flying from the top of his tower and to his death. Rock, still a young child, felt a strange mixture of feelings. He felt joyed that a horrible man had met a deserved fate, but he felt lonely, now truly orphaned. He would attend Terry's street fights from then on. Eventually, Rock would let his anger get the best of him, and charged Terry down. Terry, the kind man he is, wouldn't try to hurt Rock at all. After Rock got his feelings out, Terry and him talked a lot, and Rock would become Terry's pupil and eventually adopted son. Rock would grow into a formidable fighter in his teenage years, combining the fighting styles of Geese and Terry, and improving on their moves a lot as well. Rock would end up competing in the King of Fighters tournament held in Second South Town, and would find that it was a ploy by his uncle Kain R. Heinlein to get Rock close to him. They agreed to work together, Kain wanting the secrets of Geese's will and also promising to tell Rock things about his mothers family, and saying she was possibly still alive.

Rock is the epitome of an all-rounder, thanks in no small part to his mixed moveset from both Geese and Terry. Rock has great buttons for neutral, like his 2MK, 2HK, 5HP, 5MP, 2MP, and j.HK. He has various specials with great uses both in neutral and offense, like his 236P Reppuken fireballs, his 214P Hard Edge specials, his various 236K Crack Counters for calling out bad pokes, and even a 214K command run with various followups to mix the opponent up with. He even has a 360P Shinkuu Nage command grab that he can cancel with PPP for extended combos from it, or hold PPP to shoot out a blast of energy with Rasetsu. Rising Tackle is a charge move sadly, limiting it's usage, but if Rock has the charge for it, it's a great reversal and anti-air.

Rock's supers match up in their versatility as well, with 236236K Shine Knuckle being a great combo ender, 236236P Raging Storm making a useful and damaging anti-air and reversal, and his 632146K Deadly Rave level 3 giving him massive damage potential. What holds Rock back from top tier status is not excelling in any specific category, and having lackluster and committal tools in comparison to the top tiers. Rock has to play a bit more honest, for lack of a better word, and struggles against the powerful and high damage pokes that the top tiers have. Rock is plenty powerful, and if he gets to play his game, he shines with the best of them. He just doesn't get to play the easy and straightforward style of many of the top tiers.

Best - K: Rock is very comfortable playing in K-Groove, as it gives him all he wants. Run and hop make his mixup potential a lot scarier than it already is, and h.HK is a beast of a button that can be hard to properly challenge. He has plenty of use for Just Defend into punishes thanks to 214HP Hard Edge being a very consistent hard knockdown ender. Rage makes him a damage beast, and he can do Deadly Rave combos like Geese for massive damage, or save for a confirm into level 3 Shine Knuckle or an anti-air with level 3 Raging Storm. What K-Rock lacks is a roll, which isn't too bad since his roll isn't the best, but it does mean he can't roll cancel specials. Some of his specials do work well with RC, like 236HP Double Reppuken, or his various 214K command runs. Still, this isn't a huge downside, and the rest of the benefits make K-Rock the best rock.

Useful - N/C/P/A: Rock has uses in a majority of the other Grooves too, though they don't give him as much as K-Groove does. N-Rock gets a lot of what K-Rock gets, but also gains a roll in exchange for sacrificing the damage of Rage. Rock doesn't have a great roll, but being able to RC various specials makes his neutral a lot scarier, and gives him the ability to reversal without charge or meter. C-Rock gets more access to his supers, namely Shine Knuckle, allowing him to end combos in bigger damage. Level 2 Raging Storm is a cheaper version that still is a true reversal, and he can confirm it into a Hard Edge or a level 1 Shine Knuckle for worthwhile damage increases. P-Rock has very consistent punishes after a parry, making him a rewarding P-Groove character. He also maintains hop for h.HK. The sacrifice here is that you won't usually have meter, but when you do, a single parry hurts a lot with a Deadly Rave combo. A-Rock has a damaging Custom Combo, and CC in general is a great utility. Rock has a lot of utility with CC as well, letting him use it in a variety of situations. The sacrifice is never using his supers really, and no hop/run.

Worst - S: S-Rock has very little worth using. While Rock can perform without meter fine, his supers are great, and having meter to use them is a big buff to Rock's gameplan and damage. The level 1 versions of his supers aren't the greatest, doing lackluster damage and not being reversals, so having infinite level 1's isn't a huge deal. Having to charge for meter is very risky as well for an aggressive character like Rock. Run and hop are also in K-Groove and N-Groove, two of Rock's best Grooves. You would be better off picking any of the other Grooves for Rock. 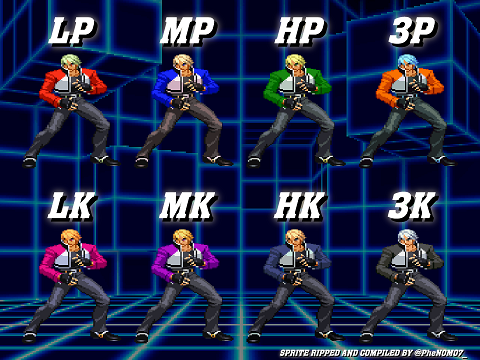