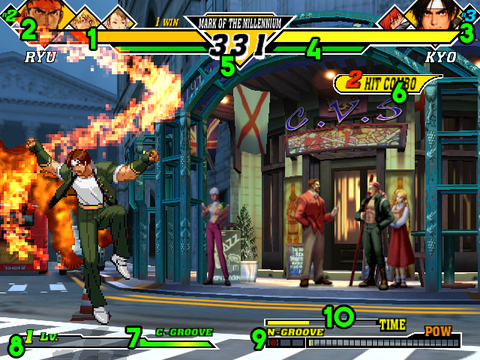 ① ― Health ・ This bar displays your current stamina. Each character has their own health value, adjusted by ratio, so think of this bar as a percentage value. When it depletes, you are knocked out.

② ― Characters ・ This shows a portrait of the character you are currently playing as, as well as the other one or two team members (that aren't knocked out).

③ ― Ratio ・ This is the ratio number for your current character.

④ ― Guard Gauge ・ This is the guard gauge. It gets depleted as attacks are blocked, and recovers gradually. It flashes when it is about to break, and breaking will cause your character to be vulnerable to any attack for about a second.

⑤ ― Round Timer ・ This timer shows how much time is left in the round. The timer starts from 999. When the timer hits 0, whichever character has more health remaining wins the round and keeps all of that health in the next round.

⑥ ― Combo Counter/Messages ・ The numbers show how many hits you have done in a combo. Below it, there can also appear messages like "Guard Crush", "Reversal", "Counter", and the type of K.O. in the end of a round.

⑦ ― Special Gauge ・ This shows how much meter you have (the way it looks depends of your Groove). Most grooves just show "MAX"/"FULL" when their gauges are filled up, but there are two exceptions.

⑨ ― Special Gauge Stocks (N-Groove) ・ This is the amount of stocks available in a N-Groove Special Gauge. Unlike C-Groove, these are shown as 0-3 pips instead of numbers.

⑩ ― Meter Time ・ A smaller gauge that appears above the Special Gauge. Used to show the remaining time left in certain actions, like the MAX Mode in N-Groove and custom combo activation in A-groove