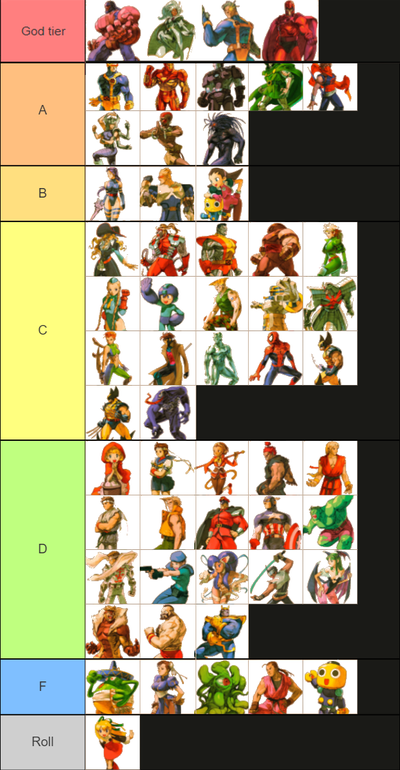 There are three ways to divide up Tiers in Marvel vs Capcom 2: by overall team value, by assist value, and by solo value. The following list is the commonly accepted tier list, and represents evaluation of characters garnered from years of experience and play by masters at those characters. Thus while certain characters do not often get seen or represented well, they really do have strong advantages - or disadvantages.

This tier list is from Japanese player Joo. While there will be disagreements about the placement of some characters, it is a long-standing list and represents a generally accurate picture of the game's accepted balance at a competitive level.

While there are way too many possible assists to have a full assist tier list be valuable, the following are the highlights of the possible assists. Since the assists available on a team greatly affect team dynamics, there is no true best assist - simply a lot of great options that will help sculpt your team.

Marvel has 56 characters to choose between, each with three assist types to pick between. As such, there is over a million team variants to pick between. The following are particularly noteworthy choices. Generally the order of the characters can be switched within reason. Storm and Sentinel can generally be interchanged on point, but Magneto should generally always be either the first or last character on a team, and only last if he's paired with Sentinel on point. The assists chosen for the characters listed are the general preferred assists to use, but other assists can certainly be used if they're effective for you.

Top Not Quite God Tier Teams

Other Teams of Interest

Low tiers are characters that are lower in overall ranking and generally in gameplay strength compared to those considered top tier. They usually lack many of the advantages and damage potential those higher on the tier list enjoy. There are still people who play them for a variety of reasons, be it different play experience, to test one's skill, catch a opponent by surprise, or because a particular low tier has a good match up against a top tier character. Notable low tier players include: Vegita X (Rogue), Viscant (Anakaris/various/counter team), Mike Z (Hulk, Juggernaut), and Joe Zaza (Wolverine).

It is still possible to win with a low tier character in MvC2 although it takes much more skill, patience, and overall work than it generally does with a top tier character. Many top assist characters are low tier when used on point but the advantages their assists bring usually nullify their poor performance on point.

These are things to look for when trying to use a competent low tier character (does not necessarily means they should have all of these):

Depending on what your character has then you can start building a strategy around it. In the early stages of the game people would build their entire game plan on making you eat the same chippy projectile over and over again, you have to find your objective and try to find ways to achieve your objective. This is the first fundamental step in using low tiers since few people use them and thus it is unlikely for you to find a established play style or strategy to use with your low tier character (although the room for innovation is one of the main reasons you might want to use low tiers).

Other things you should consider doing when playing a "low tier":

Now in order I will go through general tactics to try to use with these traits:

Overhead Combo ability
Most experienced players will see the main advantage of this which is why low tier characters with this ability are usually the most commonly seen. Much like top tier characters with this trait the goal is to make your opponent guess incorrectly so you can land your combo. Usually you want to make them block your assist and follow up with a mix up of high, low, throw.
Throw Combo ability
Even if they can roll before you can hit them with something this is still pretty useful. The fact that you can force them to roll means you have a chance for a roll wake up mix up. (which is to ambiguously position yourself next to where they are going to get up from the roll, making it hard to tell which side you are actually on) Then there are characters like Charlie that can combo off their throw midscreen as a juggle much like Magneto combos off Psylocke AAA. The drawback of course tech hits and tech falls but this is still another advantage you can use.
Slow Moving Projectile
Although not as useful as some of the other traits it can still help. Sometimes it can be as simple as providing a lead in to a dash in attack (e.g Guile sonic boom rush down) but other times you can use them in more deceptive ways. One of the trickier tactics is to throw a projectile you know your opponent will avoid and then when they attack your character you simply pushblock them back into the attack they just avoided. (e.g Bison's orb attack)
Air Mobility
Extremely important in this game more so than other games mainly because many characters and assists can control so much of the ground. So being able to alter when you land and close in on your opponent from the air is a very important asset. This is not limited to just air dashes either as flight, double jumps, teleports, wall jumps, and air attacks that allow you to block after their usage can all be useful in different ways.
Ground Mobility
Is still very important in this game, closing in on your opponent is key to landing your combos so it's utility is pretty plain to see.
Fast Attacks
This basically also includes high priority attacks. Whether it's to take control at the beginning of the match or just so you won't get counter hit and comboed every time you try to use a normal this is pretty important. Even if your character doesn't have ridiculously strong normals or specials it's still good to know what your best attack is and what situations to use them.
Damage Output
Damage output is pretty important because basically every time you land a mix up or get your opponent to block something you want the damage to be significant. If your character averages 46 damage per combo and your opponent averages 86 then you have to trick him twice as much as he has to trick you in order to do the same amount of damage. Of course this isn't everything and there are other factors as well (such as how hard or easy it is to trick your opponent into getting hit, or the other advantages your character has) but it's always a good idea to go to training mode and trying to find your character's most efficient and damaging combo before trying them out on your friends (even if it is just casuals).
Meter Building
This is extremely important, take for instance Thanos, he has excellent supers but he has a very hard time building meter for himself. Another good low tier example is Servbot. Good meter building is a very valuable trait and even if your character can't use the meter themselves it can of course benefit someone who can make very good use of it on your team such as a character like Cable or Storm.
Chip Damage
It's obvious what this is good for. Whether it's a good super that's safe on block or just a projectile you want to hit your opponent with as much as possible it's still something. You can build a game plan around a character's chip damage and although it's not nearly as viable or dominant as it was in the early stages of the game it can still work.

It is important you use every advantage you have with low tiers because they are low tier for a reason, they are likely to have some sort of crippling disadvantage or are just overall inferior to the top tier so you'll want to make the most out of your character. Even if you find a lot of tricks that will only work once those are still little surprises that can make the difference between a win or a loss in a clutch situation. It is also important to note that assist and team mate selection is even more crucial since you will most likely want to depend on them to make up for your low tier character's weaknesses. Overall, use low tiers because you want to and not necessarily because they are the best character for the job.

The SRK Low Tier League ran for several years on PSN and XBLA. The God Tier and High Tier characters were all banned: no Sentinel, Cable, Storm, or Magneto, and no Cyclops, Iron Man, War Machine, Dr Doom, Strider, Spiral, Dhalsim, or Blackheart. Additionally, the Tron-Y assist was banned.