Mega Man (called Rock Man in Japan) is one of CapCom's older creations. Created by Dr. Light and accompanied by his dog Rush (Rash in Japan), he fights against various power-themed bad guys in his adventures, and gets their specific power-up when he defeats them. His sister Roll is also in MvC2.

Mega Man is a very interesting character in Marvel. He is one of the few characters that can challenge or beat Magneto's priority and also fight Storm's runaway fairly effectively. He has very severe limitations in terms of his short hit range and poor maneuverability, but also is a one man zoning machine if played "properly". Zoning, trapping, and building levels are Mega Man's strengths. You will want to abuse his FP (ey!), throws, and his Power-Ups. He is not generally very good at coming back. His Busters do no chip damage, so while "building levels" is a game plan for a while, you will want to be able to do more with him then just jumping around firing Busters. 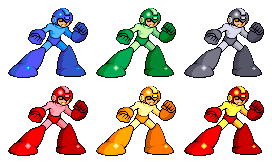 His LP and LK are one-frame moves and beat out or trade with every move in the game. They have no range, though.

The uncharged air Mega Buster does 20pts of damage. This is better than most charged Busters. Mega Busters cut through Hail Storm. A smart anti-Mega Man Storm will thus summon an assist to take the hit, but it's still generally a great trade for you.

His Dragon Punch is pretty paltry and not used too much - it can be useful for spacing, but his jump Buster is usually the better choice.

Eddie brings you the power-ups, and releases them when he's about a body width away from you. You must claim them by moving through them. Note that an opponent's Mega Man or Roll can take your power-up.

The Tornado Hold OTGs. It does no damage if blocked. It can cancel some projectiles. LP does a close range Tornado, the FP does it farther away. The spacing is obviously very important.
The Rockball drops in front of you. You can then kick it, and it will bounce around the screen for about 3 seconds or until it hits the opponent.
The Leaf Shield forms around you and serves as one-hit full armor. You can then fire it straight-forward (in the air as well) using QCF+P (weapon activation), and can do up to 6 non-chipping hits. The Leaf Shield goes away after about 5 seconds even if not fired.

Generally his Rockball is considered his best power-up - it's very useful both to help stop rushdown and to set up better trapping/zoning. His Tornado Hold is very useful too, though, and helps ensure that a whiffed ground combo series doesn't get you killed. Leaf Shield is generally not much loved.

Smart opponents will expect the wall jump and punish you for it, so if you see them jumping with you, watch out.

Mash kicks for bombs, punches for bullets, can move plane in any direction.
Rush Drill

Mash to drill faster, can move forward/backward or jump.

Hyper Mega Man (HMM) is his only useful super: it combos very easily off his air combo and is fairly safe to DHC out of as long as you DHC while the projectiles are still on screen. It has an invulnerability frame just after start-up that you will want to learn to use effectively. That frame puts you offscreen temporarily, but you must DHC out if there is an onscreen projectile you are avoiding, as otherwise it may still hit you. HMM fires bullets downwards too, which may trick some people. If you HMM while they're offscreen and you see the combo counter go up (indicating they probably just ate two of the down-bullets) you can DHC to Cable HVB (or other super with quickish startup) and have it connect. The super does very poor chip damage and does not do effective damage unless the opponent is a body length away from you. As such HMM should never be used in the corner.

The Plane and Drill have both been badly nerfed since MvC1.

You can use the Plane for limited extra mobility at crucial points, but it's generally useless as anything other than chip. Start-up is slow and recovery is also slow: ending it by moving to the far side of the screen as close to the ground as possible is usually the safest. You can counter an anticipated guard cancelled punishment by putting spaces between the bullets. You can be hit out of the Beat Plane by almost any move, and it does not have invulernable start-up. Sentinel can fly above the Beat Plane and you will not be able to reach him.

You only want to use the Drill if you're showing off. The drill is invincible once started. It also has very bad start-up and recovery.

His Charged Buster assist is rare in that the projectile does not dissipate when your point character super-jumps. This can be used for some level of trickery.

Mega Man's best opening attacks are his jab (beats or trades with everything that is not armored) and his jumping LK, which comes out very quickly.

You can also combo into Beat Plane or Rush Drill off a charged Buster, but there's generally no good reason to do that.

His infinite (J LP, J MP, J FP) isn't really practical outside of the corner. Very few people can do Mega Man's infinite reliably - usually it is best set up off a good assist such as Psylocke, and is best in the corner.

The Useless and Not Practical Rush Glitch

A practical joke video showing "Rush" was made by people from California. To get this, the other player's Venom does the web ball capture to Mega Man, walks forward and does another web ball capture just as his Magneto-A assist knocks you out of the first capture AND you Hyper Mega Man at the same time.

While the effects are cool (invulnerability, infinite HPs), this is obviously not a practical glitch.