Morrigan Aensland, arguably the main character of Capcom's Darkstalkers series, has been present in Capcom's vs series since Marvel vs Capcom 1. She is also the first Darkstalker to appear as a playable character in any vs game.

Popular in casual play in MvC2, she is considered by most to be upper-mid tier. Morrigan is similar in gameplay to a shoto with improved air maneuverability and above average rushdown. 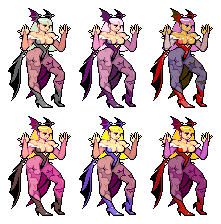 Morrigan's normals can all cancel into a full magic series. Of special note are her j.lp, which is generally her best rushdown tool, and c.db+hp, which is her only ground-based heavy normal that's safe on block by itself, and has good range, startup, and recovery to boot.

s.f+hk: A multi-hitting flip-kick. This move is COMPLETELY USELESS. It has the longest startup of all her normals, it looks like it hits high but it DOESN'T, and it has terrible range. It's not cancelable into specials or supers either. Avoid at all costs.

c.db+hp: One of Morrigan's best all-around normals. Good horizontal range, good startup, good priority, and excellent recovery. This is her ONLY ground-based heavy normal that's safe on block by itself. It also combos fairly easily into silhouette blade.

c.df+hp: Morrigan's launcher. Decent range, average priority. NOT SAFE ON BLOCK unless you cancel into something or have an assist covering you.

Morrigan has a shoto-like collection of special moves. Each is useful in its way.

version is multi-hitting. Used as anti air and in some combos. Can be canceled into Darkness Illusion and then quickly DHC'd to combo off of an anti-air hit.
Vector Drain

Command throw. Morrigan does a spinning jet-propelled slam. Decent damage. Cannot be tech hit out of. Unfortunately. it sets you and your opponent a full screen away from each other and you recover at the same time.
Shell Kick

Three-hitting aerial drill move. Used to make certain air-to-air confrontations safer, and in certain combos. This move has exceptionally long hit stun, which allows for a couple of her infinites. This move is also Morrigan's best bet for doing solo chip damage (unfortunately).

4 frame startup. Tied with several characters as having the 3rd fastest snapback in the game. Decent horizontal range, iffy vertical range, hits OTG. Recovers quickly enough to punish an assist with a double-snap followed by relaunch to death, but the timing is difficult.

16 frame startup. Tied with several characters as having the 2nd fastest tag in in the game. Unfortunately, the range isn't too great.

Mash buttons for more damage. With the longest startup of all her supers before the flash, SE is just slightly faster than Ironman's Proton Cannon. Also like the Proton Cannon, it's instantly full-screen after the flash. Huge damage variance depending on where you hit your opponent; SE can do as little as 20 damage if you catch them in the air, or as much as 90+ damage if you catch them standing at about 1/4 screen distance from Morrigan. Difficult to combo into.
Silhouette Blade

+ hp
Fastest startup super. Easy to combo into. Her only super that's sort of safe on block. Good for DHCing out.
Darkness Illusion

Completely invincible after it connects. Might have some invincibility before it connects as well, I've gone through Sonic Booms and Viper beams (blue ones)

attacks whiff against it to. Bounces off most projectiles.

Soul Fist
Soul fist can be a decent assist for combos and ground control, but it doesn't make a good variable

Shadow Blade
A superior Soul Fist assist type. You get the same assist as Projectile, but a better variable counter, Shadow Blade. You also get a safer THC, if you're into that kinda thing.

End with HP or HK for better positioning or Soul Fist for slightly better damage. In the corner you can finish with HP,HK and try to OTG your opponent with a LP on your way down. Followups to the OTG will be listed in the advanced strategies section. I know these are basic air combos, but it's her best option without assists or supers.

Other AAAs work as well.

The most reliable way to combo into super on her own.

You have to be close for this to work. Easier in the corner, but works from midscreen as well.

Tron assist works best becuase of the damage, Storm and Gambit assist work great too. (many others)

Her basic standing Sentinel infinite. Other variations also work. If you're getting too far away from Sentinal, you can dash forward in between reps to get closer.

This works on Doom, Tron, Collosus, Storm, Venom, Bison, Silver Samurai, Anarkis, Zangief, Sabretooth, Ruby, and Amingo. You can also do one cycle to set stuff up on the Hulk, Sentinal and Juggernaut. This and her standing Sentinal infinite are her only really usefull infinites.

Difficult to perform, but this one might actually be useful if your timing is good enough. Works on any character from anywhere, decent damage, good resetability and comboable into SE or DI.

Morrigan's throws are best accompanied by an assist. Depending on which assist you are using, though, you may want to use a different throw.

After this combo, the following events will occur, in this order: