Tron Bonne was first seen in the Megaman game "Megaman Legends". She later appeared in her own game, "The Misadventures of Tron Bonne." She is a member of the Bonne pirate clan. Her older brother is Teisel, and her younger brother is Bon (aka Baby Bonne). She is 15 years old, and has a crush on Megaman. She is a mechanical genius (which explains her Gustaff) and is assisted by her Kobuns (known as Servbots outside of Japan).

Tron Bonne is most notable for her projectile assist, which does more damage then it should, and resets combo damage as well. 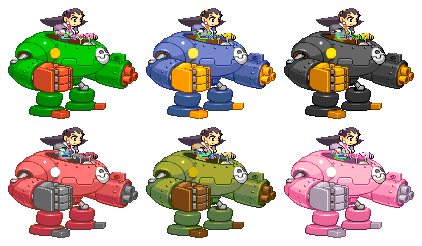 Note that her crouching MP (rings) hits three times - the third ring can often come out after you cancel into Lunch Rush, which will knock your opponent out of it. As such, it is not recommended to combo from the rings into the Lunch Rush.
Her jumping Short has a stunningly good hit box and beats all sorts of things you wouldn't expect it to.

Lunch Rush: Tron shoots a short-range beam that hits up to about the top of normal screen height, down to her waist, about half a character length in front of her, and very slightly behind her. If it hits, a Kobun yells "Gohan desu yo!" (Meal is ready!), and the 39 others Kobuns (plus Data the monkey) charge through to eat, hitting the opponent. It does very good damage. If the gun misses, the Kobuns do not come out and the recovery is horrible. It can only be DHCd within a very small window - King Kobun is the better super to DHC out of. The first Kobun OTGs the opponent, so if you have already used your OTG (for example, on a switch-in that hits, cLK (OTG), Lunch Rush), the Lunch Rush Kobuns will be blockable. It generally will not work on Captain Commando in the corner due to his tall/thin body. A Lunch Rush against two opponents will *hit* with the gun and send them flying, but the Lunch Rush itself will only damage the first character hit by the Kobuns.

King Kobun: The Kobun grows to giant size and smashes the opponent with his squeaky hammer. You are pretty much guaranteed that the hammer will swing/hit once, which means it can be used to trade in some situations. If it is not combo'd into, the opponent can jump or superjump (required for large characters) out of it. It can not be cancelled to into cleanly - any cancel will allow your opponent to jump or superjump out of it at the least, or even walk forward or throw you before King Kobun can swing the hammer. Once started, the hammer will cancel nearly all off-screen projectiles (such as Doom's air super), even though the projectiles look as if they will go over the hammer.

Standing MK (fire)
King Kobun
Standing MK
A fairly poor move, but can surprise the opponent who will not believe you deliberately picked her B assist.

Crouching MP
15+15+15
King Kobun
Crouching MP
One of the best assists in the game. This is a glitched version of her MP that hits three times (as normal) but does 15 pts of damage per hit (not normal). The third ring hits at a slight delay, allowing for some mind games. Note that the Tron-Y alpha

There have been multiple reports that there is some European version of MvC2 where the Tron-Y assist actually is her Kobun projectile special. There has been no specific confirmation as to what version this might be, so at this point this is only an unconfirmed rumor.

Her simple infinite is: Beacon Bomb, slight pause, Kobun Launch, repeat. You will likely need to walk forward to adjust your spacing so that the Kobun Launch keeps knocking them into the Beacon Bomb.

Her third infinite is (LP, MP flame (one hit only), sj cancel to air dash, j.LK, j.HP, land, dash, repeat). Beats has a video here with it: https://www.youtube.com/watch?v=pnLD233ThH4

Generally, Tron is most useful due to her great assist (Y-type: Projectile), which does 15pts of damage per hit on normal game settings. This hits up to 3 times, but the 3rd ring is at a minor delay and as such will not hit unless either you hit the opponent deep with Tron, or if you continue to combo them as the rings hit.

When she comes in, she is relatively limited. When she is played solo, it is ideal to have her near the corners, as that gives you opportunity to set up the throw into corner OTG into Lunch Rush (simple solution) or launch into one of her many air combos that reset via a throw into corner finisher.

She benefits most from projectile assists such as Doom-B, Storm-A, Sent-Y, or Megaman-projectile, which allow her to cross the opponent up or use the Bonne Strike for chip damage. Being able to mash the drill for more damage is critical to having a usable Tron. She has a relatively hard time landing hits, even if you use her rectangle jump effectively. The key is that most of her combos do about 60pts of damage, so a couple key hits quickly take care of business.

The Beacon Bomb and Kobun Launch are generally not terrifically useful for most fights, but are fairly critical against fly-away/run-away characters such as Doom and Sentinel.

She can rectangle-jump using her air dash cancelled into a normal move.

Her recovery on her Fierce Punch is terrible. If it is whiffed, you can cancel into a special, super, or taunt. Yes, even the taunt has better recovery.

The general guard break used if she is solo is a mashed Bonne Strike as they are coming in. This is typically followed up a throw into corner, OTG into happiness.

One very important simple but punishing combo to learn is:

The basic Magneto anti-Tron strategy is to mash Hyper-Grav. Get used to it - if you can land close to him, you should recover first and be able to punish him.

The fight against Storm is horrible. You will be hard-pressed to beat any of her ground anti-air normals (you will have the same problem with Psylocke and other characters) and will likely not be able to cross her up as many of her moves have broken hit boxes that hit behind her. For the most part you can just normal jump straight up in the corner and your descending jumping Fierce will beat out any of her reaching normals, but that's not very effective. You will need to bait her out and punish her on recovery. Failing that, you can try to use the Drill to chip her down slowly. This is a horrible fight.

You can't let Sentinel get above you. Use the Kobun Launch and Copter to knock him down if possible, and then once he's on the way down, chip him as much as possible. Generally you can drill faster than he can do anything else, so this is actually a pretty interesting / good fight as long as you can keep him from getting above you too often.

As always, Tron's strength is getting the corner throw. A smart Cable is thus going to maintain distance with his guns and chip away at you. You will need to dash and drill to get close to him and at the least cross him up. Once you get in, you should be able to either do tiger-knee or other safe drills to chip, or punish any laggy moves of his. The key critical thing to do with Cable is to NOT move forward if you're super-jumping and he's coming upwards too. The dash and drill are laggy and badly punishable - just wait for him to descend and then try moving forward.

Pretty much every top Tron player has their own unique corner rethrow combo. This is the real heart of Tron's solo game. Since Tron is so mobile, she can usually force her way to a corner, and then one hit can usually be followed up to significant damage. One basic finish / final reset to the corner combo is:

which does 72 pts of damage. You can OTG with cLK as well - from cLK you can either relaunch them or combo into Lunch Rush.

Jaminis' throw reset is: (launch in corner), SJ xx dash, throw reset.
Preppy's throw reset is: (launch in corner), SJ, SJ LP, SJ LK, SJ LP, SJ LK Drill, very slight pause, throw reset.
A few from Mike Z are:
- Launch in corner, sj.LP, sj.LK (2 hits), sj.LK, airthrow. If you press HP quickly you can get a Fierce that combos, but if you slow it down slightly you get an airthrow instead. Also remember that if you launched them from the ground, the sj.Short has to hit twice - but if you launched them from the air (after an OTG, or after a combo to a juggle Trap Gun) then you should only let it hit once.
- Launch in corner, small pause, early sj.LP, airthrow. This is actually very useful because normally people set themselves up to tech the throw after a small combo, so very often they are not ready to tech if you immediately throw them. You also don't run the risk of getting hit as can happen with the airdash/airthrow.

Also note that if they do successfully tech her airthrow, they are released out into the stage rather than towards the corner. However, you can follow your airthrow attempt with a small pause into a backward RH drill. If done with the proper timing, the drill will come out only if they tech hit, forcing them to block, and if they don't tech then the combo continues as normal.

From Mike_Z: "Tron and Bison-explode actually have an un-pushblockable blockstun loop in the corner, with [Bison, HK drill fully mashed, optional dash]xN. If they pushblock the drill you don't move, and if they pushblock afterward Bison is what gets affected. It's also very difficult to pushblock guard cancel since when you recover from pushblock is usually in the middle of the Bisonball. I tried to use them for a while since it is guaranteed death, but it was impractically hard - as in I couldn't do it consistently even after a few weeks of practice. It HURTS your hand. Plus it tends not to work on Sentinel, of all characters. >.<"

From Beats: "Tron Bonne with MBison explosion assist serves for a real fun and jank trap setup. LK+MBison, MK, DrillxN is really strong in the corner. Especially since during the whole sequence you can alter the timing and cancelling. They can't call assists if timed right...even if not, the assists usually get stuffed and if they are even able to leave blockstun they get hit with explosion. Tron can mixup, combo into flying screen, super, or other. Either way, whatever you decide to do it can always lead back to the trap.

Sonson monkey assist can sorta do a much weaker version midscreen. Monkeys at least help you control that area somewhat but it's not nearly as stuffing as MBison explosion."

Tron drill plus Sent drones also works: once you get them on the ground, do the LK drill while you call drones. If they pushblock, mash the drill, if they do not then don't mash the drill. Let the drones hit and reset the loop while they're in block stun. They *can* get out of this if they cancel properly, but you can also take out full characters via chip if you time it right.

sj xx dash (quickly at normal jump height), land, King Kobun. Since Servbot just superjumped and is still up there (he doesn't sj cancel like you do), the super screen is active, but there's no King Kobun onscreen until he lands. Not useful since you'll be killed, but amusing.