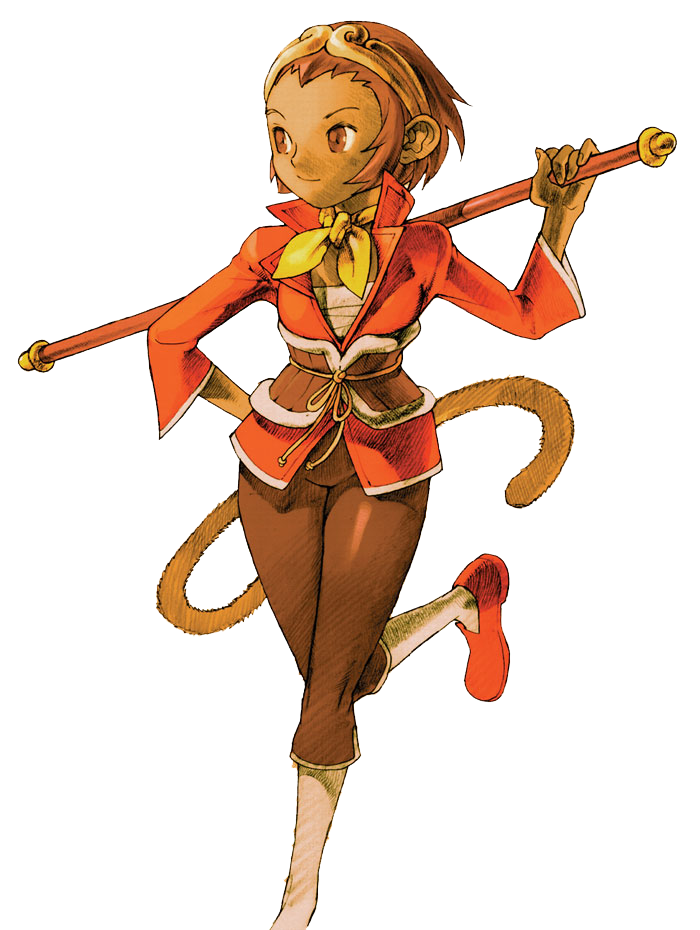 SonsonIII, or simply Sonson, is one of the three original characters of Marvel vs. Capcom 2. She is the granddaughter of the original Sonson from the 1984 Capcom game of the same name. wielding the Ruyi Jingu, a shapeshifting staff that he received from her grandfather, she set out on a journey to solve the mystery of the strange disease that struck her home village.
In MvC2, Sonson is an alright assist character with plenty of tricks up her sleeves to confuse or keep the pressure on, depending on one's play style. Though she isn't terribly strong, she's a lot of fun to play and get good at which is what MvC2 is all about right? 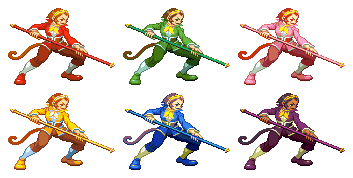 Sonson has 6 special attacks and 3 Supers, pretty standard like many characters, but her staff gives her pretty decent range and she attacks quickly with kick attacks as well. Her normals make it easy to cancel into specials and supers as they are mostly multi-hit.

Sonson blows 3 floating monkeys that have 2 doing diagonally up and down and one going straight. Great move to counter projectiles like Hadoukens or things of that sort. It also blocks Omega Red's coils and cancels out Blackheart's demons. In short it stops all of singular projectiles.
Seiten Rengeki

Anti-air attack that sends Sonson flying in the air spinning her staff. Does 3 hits and is great for cancels or finishing out a ground or air combo. Can be risky if opponent blocks the high version as you cannot block while falling down.
Kingin no Hisago

Sucks opponent into gourd then Sonson cooks them and the gourd blows up. It's a blockable throw.
Ground Crawl

Dodging technique. Sonson crawls on the ground to avoid all damage for about 1.5 seconds give or take. Not very practical as it doesn't get you very far like Capt. America's dodge does or even Akuma's. Only application could be if you find yourself in a corner getting pounded.
Wall Climb

to flying towards the opponent. Sonson runs a lap around the screen onto the other side if you let her. This move is somewhat useful, good for avoiding beams or any horizontal techniques. Great for closing distance against runners or projectile spammers.

Sonson throws her staff up and it comes down 20 times bigger for good damage. So easy to execute and the extra staff hit when she throws it in the air ensures connection when canceling into this super. If you whiff this, you can air-dash afterwards to avoid the recovery.
POW

Sonson says POW and it floats across screen. If it hits your enemy will be turned into a random fruit and be eaten. Probably the most useless and impractical Super Sonson has. Simply because POW is so easy to block and when block it leaves her open for a good 5 seconds. Just stick to the first two supers for a fighting strategy.
En'ou

Use joystick to move,

to breathe fire (and aim

). Sonson turns into a giant ape and is able to do a fire attack and a punch that does decent damage. Though you can still take damage it's an alright move to use to keep the pressure on.
THC En'ou

Auto-monkey done during the "A" and "B" THCs

Fuusetsu Zan
Gives a fruit for health. Can be useful if you are using another character as a main, but not very smart to spam. If you don't take the fruit right away she stays on screen as an easy target.

kick. Can also be used as cannon fodder for projectiles as mentioned before.

Seiten Rengeki
Probably her best assist because she has such range when coming out. She jumps out right in

of your point character. Good for getting air combos going or making space for long range combat.

*Offensive and Defensive Balance is key! - It's good to lay on the pressure in the beginning or towards the middle of the match, but if you openly attack at every chance you get, your opponent will read for holes in your defense. What you want to do is be inconsistent to throw your opponent off his/her game so they cannot predict your movements as much. It's an easy pitfall to get stuck in since SonSon can attack so fast and so often, but if your opponent is blocking 3/4s of the attacks and catching you on your broken defense, what's the point? On the other side of the spectrum, blocking too much will get you killed for sure. Once you're in the corner you will get assist spammed to hell and back since SonSon cannot get out of the corner easily nor does she have a wide radial attack for clearing space as other characters do. Kinggo could be a saving grace, but that move is very conditional since it can be blocked.

Here are some simple combos and basic movement strategy to adopt.

If you're dealing with a runner you can use the Shienbu (Monkeys) then airdash into LP, LP...

There really isn't much of a specific "advanced" strategy that is only for SonSon, it's applicable to all characters: play smart, capitalize on openings and human error, and anticipate.

Against Storm? You're going to die. BUT if you are trying to do something, tiger-knee monkeys are ok if she's far away. That way you can block on the way down. If you do normal jump monkeys, you are prone afterwards. Off-the-wall is also a good tool. If you predict a ground typhoon correctly, you can kick her out of it into an uppercut into super. If she's flying and typhooning in the air, that is a perfect time for you to use your pole super. Also remember that you can monkey super through her hailstorm. Even at top level play, don't expect this matchup to be fair.

Against Cable? You are REALLY going to die. You try ANYTHING, you are getting shot. You have to be patience and navigate the minefield to get close to him. If he does a normal shot near you, you can sweep him with down fierce. But yeah, anything you do is very punishable by Cable. You can fake a wall move by doing the wall run then pressing punch to cancel it, in order to bait out an AHVB. But that's pretty much all you have :( If you have enough energy, you could monkey-up and take an AHVB, but you can punish him after the first one and then DHC.

SonSon can be quite versatile if used correctly. There are few weaknesses she has, namely her assists aren't that strong. I've been able to rival some very very skilled Magnetos because SonSon's LP is almost as quick as his LK. If you like her then use her because the tier guides don't mean anything if the players aren't skilled.