Sabretooth is a well balanced low tier character with talents in chip, trapping, meter building and damaging comboes. He has some speed (fast walking animation for throws) average stamina and good damage when you land one of his comboes that involves a hyper combo. His B assist is also very useful in trapping which helps makes Sabretooth more of a balanced character with many small advantages instead of a one or two very pronounced ones. 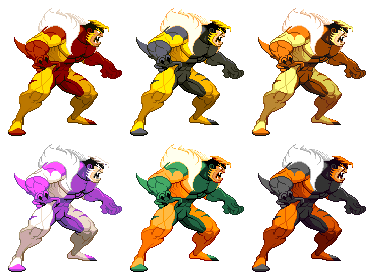 Wall bounce (aironly): Press forward when you touch the wall.

For 'a' type Sabretooth only.

His B assist is commonly consider his best assist because of its blockstun and its usefulness in traps. Also because of the fast recovery time (which is balanced out by its ample start out time) B assist can usually be called back out immediately after the last bullet has reached the opponent (usually if the opponent is full screen distance away).

His A assist is also useful because it causes dead weight hit stun much like Psylocke AAA assist. (although the attack itself is relatively low priority) It can also be useful to punish attacks with poor recovery on the opposite side of the screen due to the ammount of distance it covers in a short period of time. If the counter connects it is common for it to be cancelled into the Beserker Claw X hyper combo.

Block, neutral jump and block. He has four frame light attacks and it is not advisable that you try to beat out the top 4's attacks.

You are in for a uphill battle but Sabretooth can still be of value to his team. He has a very good B assist that can help in trapping via perpetual block stun. Sabretooth on point has a decent dash to get in and try to throw (which opens up wake up roll mix up options since if they decide not to roll he can HP beserker claw them in punishment for laying still). He can also encourage someone to come to him by building meter with backwards jumping roundhouses. You can call a assist at anytime during a normal jump and in addition he is free to block after any jumping kick attack. A advantage to building meter is that you can use setups in conjuction with assists to get safe significant block damage off his Hyper Birdie hyper combo or just save it for another character on your team that can use it more effeciently. Another useful thing about Sabretooth is his wall jump which can delay your jump and help throw off when people expect you to land.

Overall, Sabretooth is a competent low tier character and is not recommended to those who lack experience within the game.

• His infinite (although he could have more than one) is in the corner [CR.LK, CR.MK, HCB+LP]

• Canceling a Birdie call into the 'B' THC gives him recovery as soon as the first Birdie leaves. Thus you can just do HK Birdie, THC, THC (or regular super), repeat.

• When he is the last character on your team and you have him on projectile assist you can do THC followed by a HCB+HK/LK then another THC until you run out of meter.

• When you tag out his sprite stays on screen longer than usual making it look very strange.

• His jumping roundhouse can be used as a instant overhead against larger characters. Due to the glitch Sabretooth has with his jumping kick attacks it is possible to block on the way down or to call a assist after the initial roundhouse and then hit another roundhouse on the way down (the assist helps provide extra hit stun so the second roundhouse can combo) which will then lead to the player's combo of their choice.