Scott Summers, known by his hero alias Cyclops, is a character from the X-Men series by Marvel. A mutant capable of generating concussive force-based beams from his eyes, Cyclops fights for peace and equality between humans and mutants as the leader of the X-Men, fighting to protect mutants in a world that hates and fears them.

In Marvel vs Capcom 2, Cyclops is a jack-of-all-trades type character and Marvel's version of the Shoto, with projectile, uppercut, and tatsu special moves. Generally, he is relegated to an assist, as his anti-air assist is among the best in the game, but this does not mean Cyclops cannot play well on point. He has a great set of powerful normals, a good variety of special moves, and two great supers, and thus he works with a wide variety of playstyles. While not god-tier, Cyclops is extremely solid in both ranged and close-up gameplay. Coupled with characters like Sentinel, he can be a real threat to a number of characters on the roster.

If you like Captain Commando's assist, Cyclops is very similar in respects to assist use, but has a better combo game and much faster meter build, plus having the use of a double-jump and two roundhouse variations.

Cyclops is a jack-of-all-trades, though not nearly as dominant as Storm is. Although he is not god tier, he is in the top 10 for the best characters in the game, and possesses a solid ability to both rushdown and zone out.

If you were thinking about playing a shoto, this is by far the best version in the game. 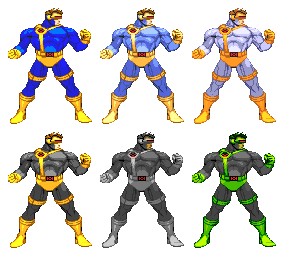 The colors are incorrect, but the hitbox is accurate.

Great move to cancel from 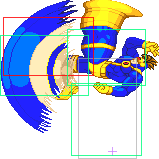 The colors are incorrect, but the hitbox is accurate.

Sends them down if they're in the air. 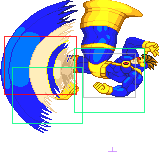 Sends the opponent down when it hits.

Hits pretty far below him

Yes, he is completely invincible on startup.

Mash buttons to see this part of the move.

Shoots a beam along the ground.

A flurry of attacks, mash buttons to get them.

You can do well against most beginners by running away and throwing out Optic Blasts and Optic Bullets until you have levels. When you have levels, use Mega Optic Blast to chip. If they get close, double jump away and mash sj.HK as you go to get more meter. This beats most low tier teams pretty easily.