Strider for the most part is not for beginners or for those with limited execution. He takes a very deep understanding of the engine to manipulate his trap to perfection. On top of that, its very easy to cancel a dog\bird into a grab super w\o perfect buffers and all teleport inputs must be put in precisely. Other wise, he'll end up on the wall and that's not a place where you want to be as a Strider player.

Aside from execution, he doesn't play quite like anyone else. He doesn't have an air dash so he can't overhead all that well, only when he has orbs can he do this and be truly effective. His biggest problem is constantly gaining bar to perform his trap so essentially, your goal is build bar while trapping.

Usually, Strider based teams are Doom-centric for their assists. Meaning that the entire team revolves around Doom as your only useful assist. Coming from a few years of Strider experience, Striders assists are damn near useless to an extent. You don't really want to use him because for starters, his assists suck ass. Secondly, if he gets glanced, he's bleeding and in the hospital. Its just not worth the risk to get him hurt because he IS the team. All Strider teams for the most part are there to help aid Strider to become purely effective @ the expense of the other 2 characters.

strider\sent\doom seems to be the strongest version of a Strider team in the game. Since doom is the main assist and IS NOT invincible. Its inevitable that he will lose cleanly to those assist who have it or can extend a hit box into his sprite box. In the scope of top tier play, this is mainly quite a few characters. You'll have to play very sneaky and smart to make up for this handicap.

Strider really shines because of the complexity of dealing with all his options. Its very easy to overwhelm someone who is not accustomed to a competent s\d. He literally shuts the game down with his super. Add to the fact that you can't name more than 3 well known Strider players and the amount of players that are able to really fight s\d are rare. IMO, it has a value to it that's not easily accessible to most people because most people aren't willing to play s\d because it's too hard. 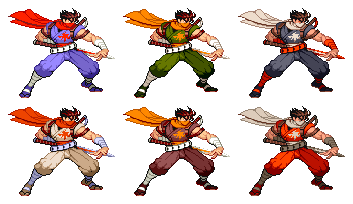 j.lk is an instant overhead.

c.fp is a VERY difficult AA to stop.

striders fp\rh have excellent priority. His sword animations contain no sprite box, only hit box. Make sure to attack with the tips of his sword to gain the max amount of priority.

Wall bounce: Press forward when you touch a wall.

+ p
Do again to release (Release is

wall climb: primarily, you don't want to do this move. However, it happens to every strider from time to time. Its impossible to input that teleport perfectly every time so its good to know how the wall climb works. First off, once you get stuck on the wall there are 4 things you can do. You can hit P to slash at your opponent, hit K to jump off the wall and kick someone, hit d+k to slide down the wall and kick down and lastly, b-f input to sling to wall opposite of strider.

useful tip: if you ever get stuck on the wall, you can use the b-f twice. Once you do this, you will be immediately released from the wall and you will be able to attack and call your assist as you're falling.

essentially, when wall climbs happen, you have to try your best to out smart your opponent to get down safe. Strider has no advantages while on the wall. Everything has to be done in reaction to your opponents move. Since striders teleport is a staple point of his game play, this is something that every s\d player has learned to deal w\ over time because it happens.

qcf+p: aka running slash. Strider runs forward and slashes towards the enemy. Never use in block strings unless canceled into orbs. Has a wide cancel window. Has a pretty bad startup.

srk+p and can be performed in the air, gram. A very far poke that can be canceled into orbs. Basically, its 90% screen. iirc, the lp\lk versions are the easiest to cancel into orbs. Comes out fairly quick.

qcf+lk, dog\tiger. Strider summons an animal that comes running in from behind the screen and the out towards the enemy covering the ground. Pretty decent hit box on this thing. Much taller than it appears and has a wide cancel window. Quick startup.

qcf+rh, bird\eagle. Strider summons a bird that comes from behind the screen again. Except, this version comes on top of his head and forms a wide arching "U" on the screen. Quick startup.

air, qcf+lp, lk, fp, rh. Strider kinda just goes flying around. The lp version is good for air combo's seeing how it does pretty solid life. The lk version during orbs can be used to combo into his instant overhead and his fp\rh version can be used to capture assists during funny bounces in order to land assist kill oppurtunites. Each has a unique purpose. Note, the lp version creates OTG properties.

sonic boom + p. One of striders least used moves while ironically its his fastest projectile. Strider summons a tiny machine with the first sonic boom. Upon the summon, the machine will hang around w\him until you tag or dhc out, if he dies or he throws it w\ another sonic boom input + p. Can be canceled orbs for practical setups. Also can be used in the air but not really recommended. The air version leaves him in a very vulnerable state since it has bad recovery frames. Bad block stun frames.

sonic boom + lk\rh. The bombs. A very useful tool and from my experience, its useful in all of his fights. Some more than others but very useful none the less. Can be canceled into orbs, average\great block stun time, horrible recovery unless canceled into. Strider summons a bomb from off the screen. The lk version lands next to him and the RH version goes 90% screen. When you summon the bomb, it cannot be destroyed. It can only be destroyed when the bomb has the parachute on it as its descending. The best feature of the bomb is its explosion animation which lasts for a quite a while. Even once the animation has totally dissappeared, there are still active hit box frames for 2-3 frames estimating after that.

+ hp
striders best super for the most part. Upon activation, he gets 2 machines that rotate around him. As the punch buttons are pressed, each of the machines will shoot 1 projectile in the form of a ring. Depending where they are in relation to strider as the spin, determines where the rings will be released from.
Ragnarok

+ hp
His grab super. Nothing too much to report. Yes there are some setups but for the most part, you don't want to use this seeing how you need bar for his orbs.
Legion

+ hk
Never knew the name of this super but I just called it the animal super or the animal farm. To an extent, striders 2nd best super. All though, most of his supers are supposed to be used for his orbs, this super has very quick activation time. Since strider is often paired with sentinel, you can use it to dhc combo into hsf very easily off a magic series, s.fp

Strider in mvc2 is usually associated with doom. Why? we'll strider's ability to activate orbs, locks down the screen. There are simply too many projectiles to deal with and in the hands of experienced player, there's just no avoiding it @ times.

So why is doom there?

Strider isn't magneto or storm. His overhead doesn't quite exactly work like theres. Since he can basically control the screen @ will, he needs some type of offensive pressure to make the enemy react. This is where doom comes into the picture. Doom chips like a mother fucker. With orbs and healthy doom rock pattern, which is random, one chip pattern can equate to 15-20% chip into another trap pattern for the same amount of chip.

so how does he play?

primarily, strider is a trap character. Most people aren't willing to deal with 40% chip for 2 bars. Thats rediculous for just standing still and blocking. So your opponents are inclined to get away from his bullshit. Ideally, you want to trap, and keep trapping. Learning his trap is VERY important for beginners. If you want to play strider, this is a fundamental of making him effective.

how do I setup the trap?

anything can setup the trap. What you want to aim for is putting your opponent in a position where he has to block, then activate. You want your rings to relayer right after the block stun you used to set it up.

easy setups: c.fp on hit, activate all though it can be dodged, this will help you understand that you don't need to create block stun to trap someone.

again, anything can setup the trap. You're main goal is to keep them in place so your rings will make contact immediately afterwards.

A very useful strider trick that is manadatory to create perfect block strings. Due to a glitch in the game, you can cause striders first ring from his activation to be faster than any of others that will come out. This is called a wave orb. It usually comes out in the middle of his sprite and its easy to tell when you've done it because there is a pretty decent gap between the wave orb, and the orb after it.

another basic fundamental. Your goal here is to pin someone once with orbs. When the orbs are about to end, your do a pattern+doom to get your chip and reactivate again. This alone can win you games when mastered.

anything works for a retrap string but I'll give a few easy ones out.

When you activate with strider, there's a meter telling you how much time you have left before it ends. In that bar, there is a 4 letter word "time." When it reaches the lettering, this is your cue that you're time is almost up and you should think about using your relayer. The main goal is to use the last little bit of your orb time, call doom, rechain, and orb again.

assuming that orbs pinned them the first time, these are some easy strings to go into your 2nd trap and so forth. When the meter reaches the lettering, "time"

these should be fairly simple to use.

EmbedVideo received the bad id "NJy40vp—68" for the service "youtube".