Chun-Li was fairly top tier throughout the rest of the Vs. series, but was badly nerfed for Marvel vs Capcom 2. Her easy ground links into the Lightning Legs Super were removed, as was her Seven Stars Kick super. She doesn't do a lot of damage, but is an interesting anti-air assist and has a surprising amount of mobility when she's in.

Note that the Xbox 360 and PS3 version further nerf her through changing the timing of her infinite.

Chun-Li is one of the "original" Street Fighter characters. She is a cop working for Interpol. Her father was killed by M.Bison. 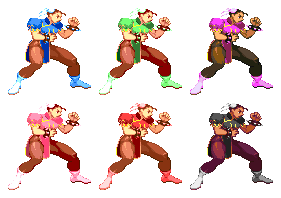 Her taunt can hit the opponent and cause one 1 point of damage. It cannot kill, though.

Triple Jump (aironly): Press u up to two times.

One of her most valuable normals is her D+HK air head stomp - you can do this as often as you would like, and once you have done this it resets your jump assist counter so you can summon an assist again.

Her fireball is pretty pathetic and not generally useful unless your opponent is coming down from getting hit by an anti-air assist.

The Kikou Shou is invulnerable after the super freeze, but has a very punishable recovery.

The Senretsu Kyaku is also very punishable on block, has a small amount of invulnerability after the super freeze, and is extremely hard to combo into by yourself compared to other games. The only practical way to combo into this super is from c.

which is rollable. If the opponent wasn't already in the air when they were hit then they are considered grounded until the final kick of the super.

Chun-Li is fairly pathetic by herself, and as such is near the bottom of the Marvel tiers. Generally she is most commonly used as an interesting anti-air assist, as an opponent hit by this assist does not recover until almost the top of game screen. When she is being played as a point character, her chief assets are her mobility and speed. Her head stomp should be heavily abused, it's extremely fast and hitting the opponent unlocks your ability to call assists again without needing to touch the ground. Her triple jump allows her to spend a lot of time in the air, the extra mobility is absolutely needed. Chun is only allowed one air dash or one wall bounce per jump, never both unless they are done at the exact same time.

A starting point for playing her is to back her with Doom-B or Tron-Y and use the headstomp to overhead people into getting hit as well as resetting your assist call count so you can do it again.

(Needs to be filled in...
She has an infinite on Sentinel and can rejump in her air combo to continue it further.
Infinite (big characters only): (Jump, xx dash, J LK, J LK, J HK, repeat).

RisunoMeijin has a number of useful tips and tricks in this video:

And you can see her infinite at 13s in this combo video by Shin (discussion on SRK):

There's a few reps of the shom infinite off of the Psylocke assist in this video starting at 11:10: