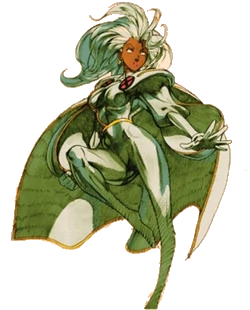 Storm, born Ororo Munroe, is a character from the X-Men series by Marvel. She is a mutant born with the ability to control and manipulate the weather at her will. Growing up as an orphaned thief on the streets of Cairo, Egypt, she would use her newfound abilities to aid local farmers as a teenager during droughts by summoning rain and eventually help protect the world from various threats alongside the X-Men.

Storm is quite possibly the most versatile of all the Marvel characters in the game. She can be played both aggressively and defensively, possessing a variety of ways to close in on opponents. Her combo attacks, both ground and air, are potent and inflict solid damage, especially when chained into her Ice Storm Hyper Combo as well as possessing decent priority. Storm can easily keep opponents at bay with her Whirlwind and Typhoon attacks and her ability to fly helps to keep her out of harm's way.

a lack of any major weaknesses makes Storm a top 2 character in every tier list, with most choosing her as the definitive best character in MvC 2, due to her ability to excel at everything from solo play to team support.

Storm is a jack of all trades and master of all of them.
She possesses many strong tools and is an asset on any team. 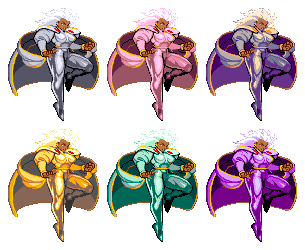 Typhoon
Really not a bad choice for an assist.
The Whirlwinds hit multiple times so it’s good for chipping and pressure.
Remember to protect Storm from attacks since she has low health.

Lightning attack
Lightning Storm
Lightning attack
Widely used assist, usually if you already have someone on your team with a projectile assist.
f she hits with this, the opponent will be launched in the air, but will be able to block on the way down.
If they block, then she will land right next them ready to get demolished, so protect her at all costs.
Good if you surprise people with this. Can also be used for setups.

Vertical typhoon
This assist generally sucks because it takes too long to come out.
Also you can’t do a team combo starting with Storm because she goes flying off somewhere first. picked mostly for Hail storm not the assist itself

Storm in that case.

Storm guide by The Fireboy

Storm is considered a Top 2 character in the game currently, and for good reason, she can do Rush down almost as good as Magneto, Super jump, throw out multiple fierce punches, air dash when she gets slow, throw more fierce punches, then lightning attack up three times and then come to the groundslowly, and most of all, holding up makes her slow her decent, and she makes that annoying “Haw!!” doing it the entire time making her a GREAT character for meter building, Storm can play some keep away, super jump up and do the vertical typhoon a few times, adding frustration to the mix, maybe causing them a mistake, doing a little chipping and everything, she has the best supers to DHC from and into(Lightning storm to DHC from, and Hail into).

Her only real problem is she doesn't really have a good anti air attack, but that can be made up by having an anti air assist like Cammy. She also can’t chip without meter too well, but with Storm, you shouldn’t have to worry about chipping, only getting a hit in and then getting them into an air combo and then into a lightning storm.

Another good trick with Storm (And Magneto) is the Tri jump, this is when you do a normal jump or super jump (though Super jump is better because you move faster) but before the screen gets the chance to scroll upwards, cancel it by air dashing down/forward, and then attack, you can get up to 3 attacks, land, then actually hit them some more before launching them.

the reason Tri-jumping plays a big part of Storm’s game is because if you do a barrage or high attacks then land and use a low attack, you have a greater chance at mixing them up and getting the hit. You can also move to the other side, crossing them up, and if you successfully cross your opponent up, you WILL get a hit in without a doubt.