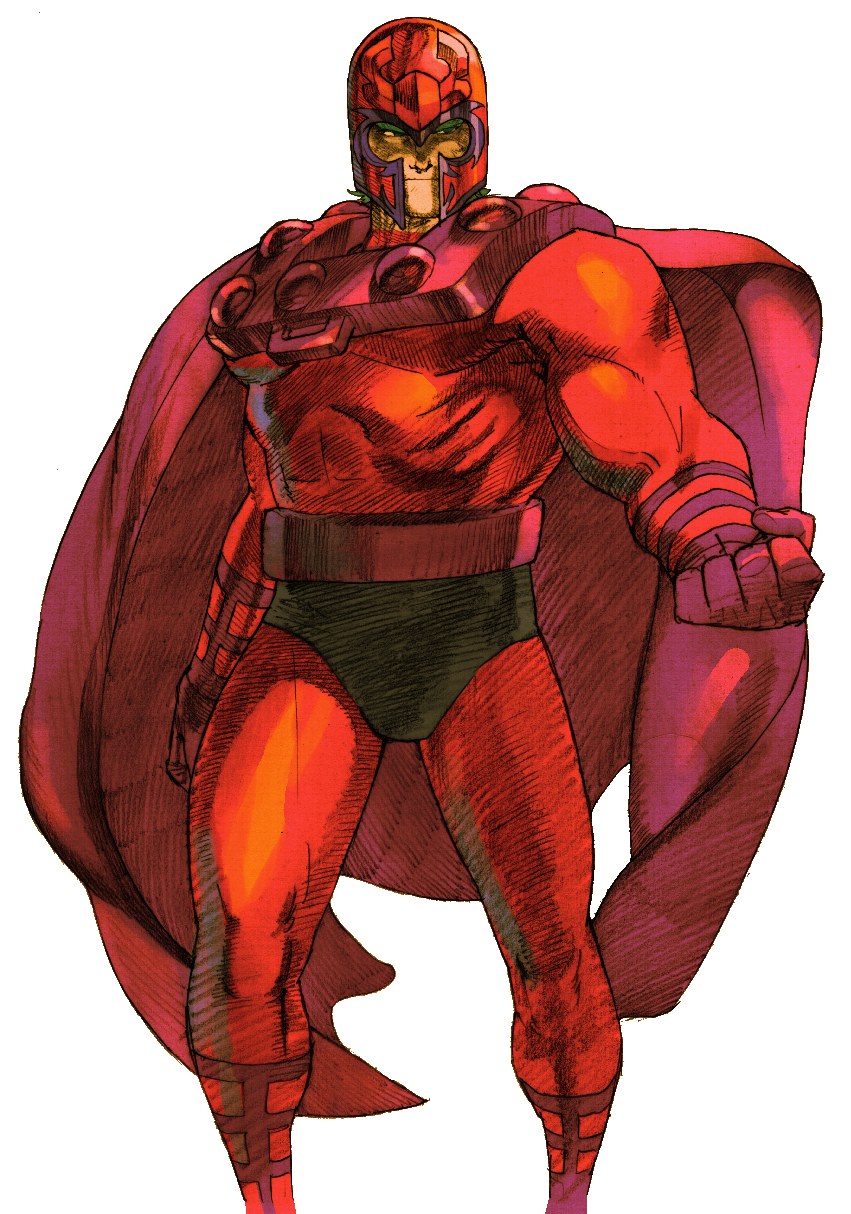 Magneto, born Max Eisenhardt, later known as Erik Magnus Lensherr, is a character from the X-Men series by Marvel. He is a mutant with a powerful ability to control all forms of magnetism. Viewing humankind as morally and naturally inferior, he aims to conquer the world in order to establish mutantkind as the dominant species; however, his extreme methods and cynical outlook derive from his desire to protect fellow mutants from the atrocities he endured as a child during the Holocaust.

The basis for Marvel's Master of Magnetism is pure rushdown. From his basic Hyper-Grav xx Tempest combos to his never-ending line of possible resets and infinite combos, his rushdown game is unmatched by any character on the roster. What he lacks in versatility, he makes up for in speed and mixups. If you like overwhelmingly oppressive rushdown, and are willing to overcome his steep learning curve, this is the character for you. 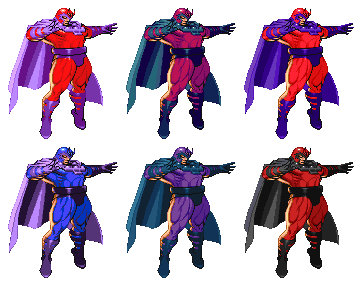 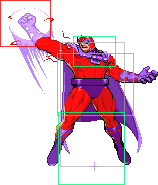 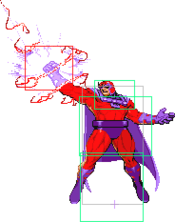 Check out the disjoint on this baby 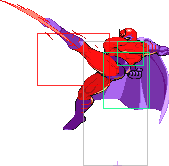 Nice move for your air combos

Air combo ender- kicks them to the curb hard

Placeholder note: Magneto's throws(both HP and HK) do extended hitstun when pressing up after you grab them. It is strictly better in 99 percent of cases.

Repeat to end. You can't block while flying.

A decent full-screen projectile. Use only the TK jab version as the other has dangerously more lag. Use this when turtling or when trying to establish full-screen distance.

Also called Hyper-Grav (as Magneto himself calls it) or simply HG, this is mainly used in combos. Either version can be used in most combos, but outside of it always use the roundhouse version to be safe. Experience-wise, it has its moments outside of combos both good and bad, so use it sparingly as it has tremendous lag. Good situations would be when the opponent is falling down to you from a superjump, or when baiting him to attack your "unprotected" assist. When it connects perform his launcher as soon as you're in range as this can be mashed out of easily.

A counter-move in which Magneto conjures a circular field around him to protect him against physical attacks, though it is too short to be of any use unless when fooling around. Avoid this like the plague.

Also called as Overhead Wave. Magneto lets out a slow-moving projectile with a weird angle. The main use of this move is to delay your descent, the projectile is just icing on the cake. Good situations would be to avoid Doom's molecular shield assist, Sentinel unblockable and some ground-based traps.

Magneto does a quick spin and then floats steadily. You cannot block while in this mode. You can move by either holding the stick to anywhere you want to float to, or using his PP airdash which is a hundred times faster and a million times more useful. Do the motion again and you will fall to the ground (You can be hit while falling unless you have Unfly mode). Be warned that doing this the wrong way (HCB + KK) will make him do a Hyper-Grav which will get him killed. This has a similar use to the Magnetic Blast: to delay your descent. This can be used to avoid Sentinel's unblockable (as Justin Wong popularized) and, in conjuction with airdashing, avoid the infamous Strider/Doom trap. He can also be in Unfly mode which makes it a little bit safer to use. Don't bother using this in combos.

Magneto reels his arm back and slams it down the ground, creating successive columns of blue Magnetic energy that shoot upward from the ground in front of him.

Also called as Popcorn or simply Tempest, Magneto lets out numerous metal shards from his hands that shoot out in random directions except behind him.

Only the alpha assist is worthy of mention. Magneto comes out and does the fierce version of his EM-Disruptor. This assist has so many uses—zoning, quick ground control, more damaging resets and combos, you can even use this as a pseudo-AAA!

If there's a character that benefits the most from this assist, it's Sentinel. It gives the robot more powerful combos (e.g. launch lk mp ff.lp + Mag-A f.hp xx LP Rocket Punch), better zoning and keepaway games. It also serves Cable and his keepaway very well. This assist forms the backbone of teams Rowtron and Combofiend and for this reason you should strive to keep Magneto alive for the late game 'clutch'.

Using this as a pseudo-AAA means pushblocking off your opponent's overheads while calling Magneto to brush him off you.

- c.HP (launch), sj.HP, airdash df, HP, HK, land, d.HK . This is Magneto's classic "five fierce" combo, which is a bread and butter combo and does amazing damage. You can also replace the sj.HP with sj.HK.

This is the basis for the Magneto rushdown game. It gives you a high/low game, as well as a mixup and crossup game.

1. Tri-jump in with a sj attack, forcing the opponent to block high. From here, you have a mixup game of either landing and attacking low, or doing another fast sj, thus attacking high.

2. Tri-jump backwards, away from your opponent, with a high priority attack. Allows you to run away and still attack. It also allows you to hit any approaching opponent, giving you an offensive defense, one that you turn into a normal c.lk, c.hp launcher.

3. Tri-jump over an opponent and to catch him blocking the wrong way.

Variants - replace the bracket section with any of the following:

Not specific reasoning other than letting someone drop/raise and for show.

The ROM is basis for Magneto play once you reach at least an intermediate level. The majority of your time playing, you'll be trying to set this up, one way or another. Add pauses inbetween after the second sj.lk when you get to the brackets, and then another between the third and fourth sj.lk's as needed to keep your opponent at a good height.

Figuring out the hand movements can be hard: here's a video of the slide technique.

OTG off whatever, easiest way is a throw.

If you ROM, land, then sj.lk, sj.lk, air dash forward sj.lk, sj.lk HG XX tempest, then after the tempest, you hit sj.lk, sj.lk, land, and start ROM'ing again. In this scenario, Magneto starts falling towards the ground after the Tempest.

Mashing out of Hypergrav xx Tempest

The perfect and minimum "escape from hypergrav->magnetic tempest" is:

IIRC, you can use either strength punch or kick as long it is N,T+P,N,B+K. You can escape as soon as the hypergrav hits. You really need to hit the neutral. Assist buttons never count for mashing. You can accidentally press them, but it's pointless and you should stop thinking they're useful for mashing if you haven't already.

Personally I do a three pass four button mash going LTR, RTL, LTR with the stick following my hand. (I probably should follow the recipe more closely, but frankly I'm terrified when I play against Magnus and '3x mash' is easier for me to instinctually run with.) I escape about 90% of the time offline and about 50% of the time online: lag plays a huge factor in online Magnus.