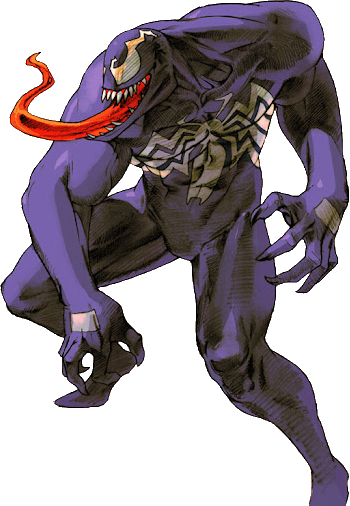 The symbiote that would be later known as the Venom Symbiote was created by the dark elder god Knull on Gorr's Homeworld. After Knull was overthrown by his own creations, most of the symbiotes memories would be erased, modified or altered, as Venom itself believed to be part of the 998th generation of a lineage of symbiotes born on the planet Klyntar.

Being discovered by Spider-Man during the Secret Wars, it bonded to him and assimilated his powers into its own genome. Unfortunately, it was later discarded by Spider-Man when he learned it was alive and sentient, as he was disgusted by the idea of permanently bonding to it. Then Eddie Brock, a journalist, who had his career ruined unwittingly due to the actions of Spider-Man, came to Our Lady of Saints Church to commit suicide, the symbiote sensed his anger and bonded to him, forming the villain Venom. Over time the symbiote's bloodlust and hunger worsened until it became too much for Eddie to stomach, leading to them parting ways.

Venom is a very simple and straightforward character. his easy execution and general purpose special moves make him a great choice for beginners and. his Venom fang is a great move that can catch opponents off guard and allow for crossup mixups. Your normal buttons force your opponent to respect your footsies range since they hit fast and strong. he can also travel through the air really fast with his web swing air dash, and combine that with venom fang and he can dominate through the air. he is great for taking out juggernauts, sentinels, thanoses(?) and pretty much any large character because his moves have a large hit box.

On the other hand, Venom has few decent defensive options but ultimately struggles. Venom's gameplan is quite predictable if you don't spice it up with assists and he shines mostly when fighting people who don't know the match-up yet

TODO: Convert specials and supers to new format, add images for them as well

Venom is a simple and powerful character to help with learning the fundamentals of MvC2. A character that is great for beginners and can remain viable in higher level play but might rely too much on knowledge checks. 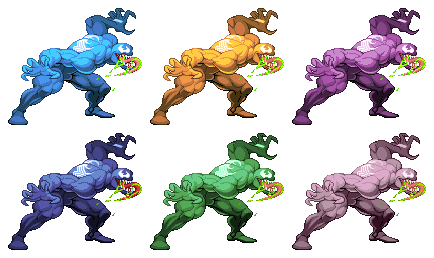 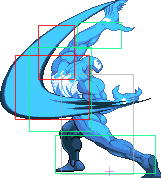 it's not disgusting, it's poison damage 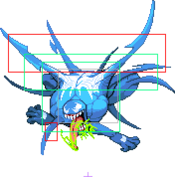 who needs super armor when your entire body and the surrounding atmosphere is a hitbox? 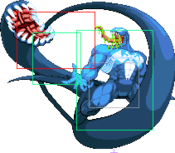 Venom performs an arching leap forward and bites, hitting multiple times.
This move has a quick start up time making it easy to combo with, plus the angle it travels at is handy for juggling.

version.
it's a good anti-air attack, anti-dash-in attack, air combo finisher and is also good for aerial confrontations. Just make sure that you don't land behind the opponent.
Venom rush

The symbiote travels along the ground and when it reaches a certain point, it forms a bunch of fanged mouths that thrust upward and bite the opponent.
Because of the start up time, your Venom Rush doesn't have much use in combos, but it can be an unexpected surprise to throw out there when you're far away and your enemy is chucking beams at you, but don't throw this out at random. If it's blocked or it misses, you will get punished severely.

Shoots a web at your opponent, and if it hits Venom will slam them into the ground multiple times.
Venom won't follow up after the web connects if you're too far away though.

travels straight across the screen.

travels diagonally up-forward, which is angled to hit jumping characters.
Slow startup, but great damage if it connects. You can rotate the pad/stick and press buttons for more damage.
mostly used for an unexpected counter.

makes Venom jump into the air and shoot out a web, if your opponent isn't blocking when they're in the web, you'll do a series of attacks dealing decent damage.
The big drawback with this super is the start up time means you won't be able to use it in many combos, but that's not too big of a problem since :
Death bite

An upgraded version of our Venom Rush that goes fullscreen and traps any opponent inside it.
This is very easy to use in combos because of its fast start up time, and it does a ton of damage.
Also, since Venom's Hard Punch throw wraps his opponent up into a web letting him combo afterwards, it's a piece of cake to set up your Death Bite safely and consistently in a match.
the biggest drawback here is that when you use this with your opponent in the corner, sometimes the majority of the hits will miss, so you'll want to stick to other moves and your corner bnbs when your enemy is cornered.

Venom Rush
Not as quick as Fang, plus leaves Venom open a lot more. Not really recommended.
It's more of a surprise attack and good for confusing your opponent.
While they're blocking it, dash up to your opponent and start mixing up your attacks or throw them.
It's also good for setting your primary character up for attacking.

: generally terrible.
Mostly for offensive pressure, anti-air and for helping your partner out of corner pressure. If it connects, your primary character can either do a super or super jump afterwards, then do an air combo.

His assists are generally terrible. Venom Fang is decent, and Venom Rush can be semi-disruptive. 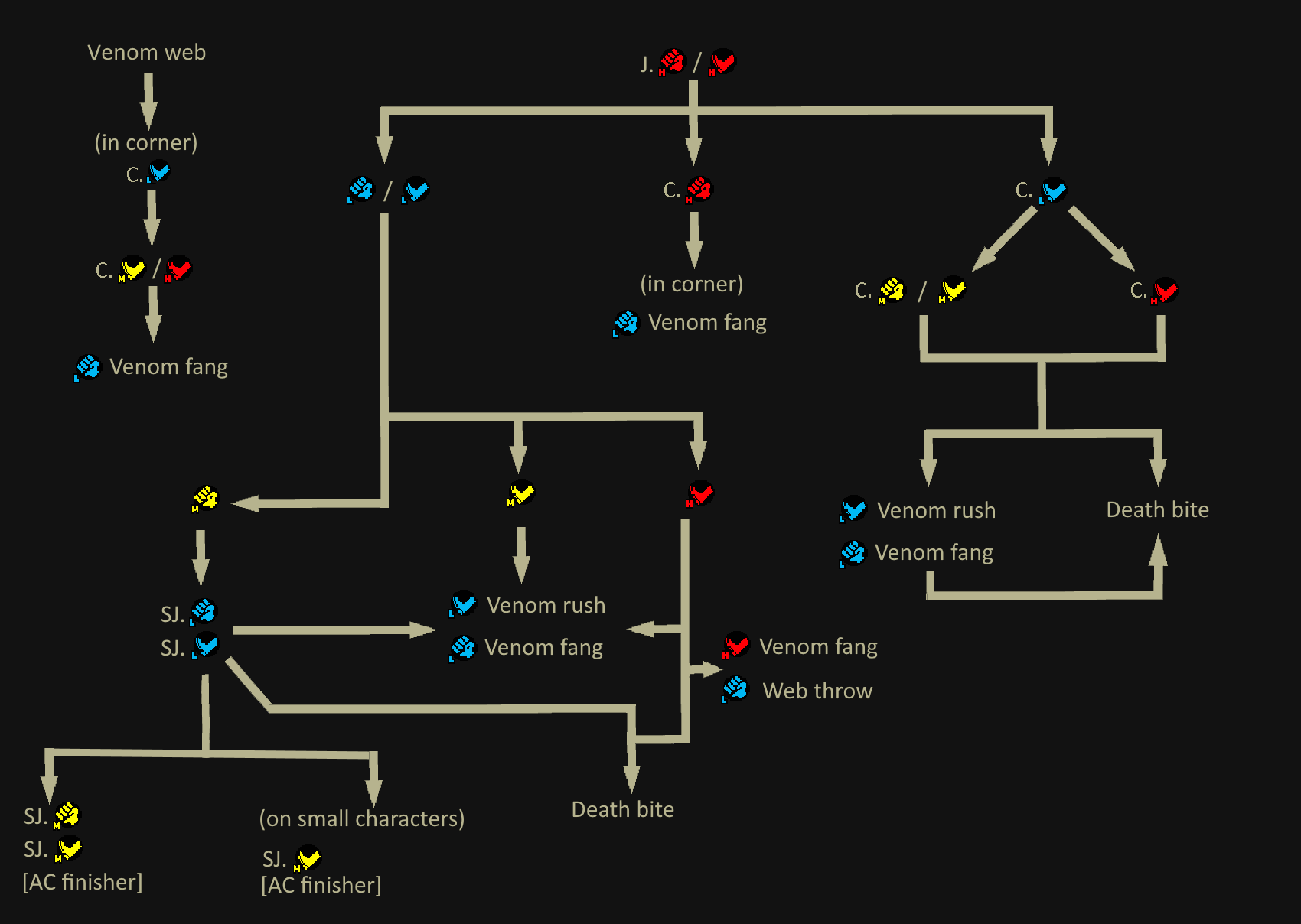 Venom is a defensive/counter-attacker character. He plays best near his opponent. Getting to your opponent is very easy for Venom. Simply use his dash, air dash or Venom Fang. When playing close, mix up your jump-in attacks, high and low attacks, launcher attack,

Venom Fangs and ocassionally throw out a Web Throw to surprise your opponent. If a launcher attack or heavy attack gets blocked, cancel into a

Venom Fang to be safe.

At a distance, use Web Throw to surprise your opponent. Make sure you use the right one. If they throw out a projectile, punish with

Venom's about power and high health, so don't worry about eating a super, because you can probably stage a come back. Some assists are harder to combo into, but others are easier. Tron's throw is a great setup. Ruby Heart's Sublimation, is also great, but wait until the last hit to connect before activation. Assists like Ruby Heart's are difficult to judge for a Venom Web, because if you screw up the timing, Venom won't complete the entire super. You should always keep them guessing with his moves, combos, and supers. Venom is great against almost every character in this game, so don't be afraid to use him against any character.

For some reason I can't imagine, Capcom has made it a little more difficult to air combo with Venom. You can no longer pull off 12-hit, high-damaging air combo anymore. You'll be lucky enough to pull of a

then do a forward kick. But I guess his improved ability to do ground combos sort of makes up for it. The best way to get all the hits in is to dial through the buttons at a slow pace--if you dial too fast, the

probably won't hit. Against small characters, you should skip the

, and just do a forward kick, followed by an air combo finisher.

Venom Fang to counter jump-ins. If an opponent jumps in and Venom connects a 5

Venom Fang or a

Venom Rush. You can also use a

Web Throw to tag a jumping opponent, but you must be able to anticipate the jump and you also must throw it out at the right time. Make sure you don't throw out a

Web Throw too early--your opponent could anticipate it and punish you severely.

to punish opponents from mid-range. If you throw out a 5

and it gets jumped over, cancel into a

Venom's dash is very effective. He travels quickly along the ground on all fours. He can go under most projectiles and it's good for getting close to your opponent and starting combos.

Both of Venom's supers are very effective. Neither one of them are meant to be thrown out at random. Venom Web is used strictly for punishing mistakes and to counter projectiles—It does most damage of both of his supers. If you detect a projectile about to thrown out or your opponent just screwed up, do a Venom Web immediately. If it connects in the corner, you can OTG afterwards. It will cancel off of a Venom Rush, but you must be very quick about it. As soon as you se the first hit from the Venom Rush connect, cancel immediately into a Venom Web.

Death Bite is used only in combos or for an opponent that is nearly dead. It combos nicely off of any medium attack or a 5

. It can also be cancelled into off of a short Venom Rush. Always make sure that it connects--you'll be left open if it's blocked or super jumped over.

Although many beginners like to use him, he is anything but a beginner's character. It is going to take a while to learn how to use him. You won't win with Venom by simply mashing buttons. It takes skill, patience and planning to win with him.

Venom's best assets are his power, his stamina, and his insane priority. Venom has uses ranging from keep-away, anti-air, and countering. His best move also doubles as the best assist in the game, the Venom Fang.

Venom Fang is great for ending combos, countering fireballers, and anti-air. Venom has great air priority, as well as great comboability in the air and on the ground. He's been sped up a bit since the first Marvel vs. Capcom, so his recovery is quicker than before.

Venom's dash allows him to travel under some projectiles and some attacks. Venom also has an air dash similar to Spider-man's. It's useful for getting out of a tough situation and to avoid beam supers. It can be cancelled by doing any attack.

crossing up the opponent won't invert the special move inputs but will invert their direction, so you can use air Venom fang to continue pressure even if your opponent crosses under you