Joseph Joestar (ジョセフ・ジョースター Josefu Jōsutā) also known as Jojo, is the main protagonist of Battle Tendency, a core ally in Stardust Crusaders, being a grandfather of the story's main protagonist, Jotaro Kujo. The younger version of Joseph is one of the hidden characters in the game.

According to the game's Story Mode, a missed opportunity in the manga, Alessi uses his Stand to de-age Joseph, however, instead of becoming a child, he becomes a young man in his prime.

Young Joseph (Youngseph for short) does not have a Stand yet, instead, he uses his Hamon based attacks and signature Clackers, making a lot of references to the part 2 of the main story. Also, unlike his older version, he is more of a zoning type character with some better rushdown tools, allowing for a more careless playstyle. 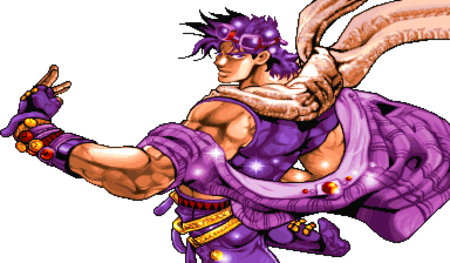