Dio Brando (ディオ・ブランドー Dio Burandō), known simply as DIO from Part 3 onwards, is the main antagonist in both Phantom Blood and Stardust Crusaders and the final Boss in JoJo's Bizarre Adventure: Heritage For The Future.

DIO is a vampire and a sworn enemy of the Joestar family. After being nearly defeated and destroyed by Jonathan Joestar, DIO and his servants manage to sneak onto a ship with Jonathan and his wife Erina. Jonathan sacrifices his life to save Erina by destroying the ship's engine. In order to survive, DIO severed Jonathan's head and combined with his body, then locked himself in a coffin for nearly 100 years until he was found by a group of fishermen. After escaping his coffin, DIO searches for a new way to end the bloody feud with the Joestar family and discovers how to become a Stand user. Waiting to restore his full power and learn the abilities of his Stand 'The World', he sets his hideout in Cairo, where he plans to defeat the Joestars once and for all and take over the entire world.

In HFTF, DIO is one of the most mobile characters. Sporting very fast dashes with little recovery and fast, long reaching dashing attacks, he can control the space around him incredibly well.
One of the defining things about DIO is his execution barrier, being the hardest character to learn due to his unique movement and combo difficulty. DIO's gameplan can revolve around different ranges depending on the matchup, and he is pretty good at any of them, with Laser (6CBA6) in his disposal as well as fast up-close buttons, he can easily control the flow of most matchups.
Sadly, despite DIO's strengths, he is plagued by some terrible moves and hurtboxes, which significantly weaken him as a character. Having a punishable grab, slow Guard Cancel that can be punished and a bunch of other useless moves, he can spell doom on himself or will have to find risky ways to stop his opponents since he can't deal with rolls.
Nevertheless, DIO is a rewarding and a very fun character to play, especially if you like fast movement. 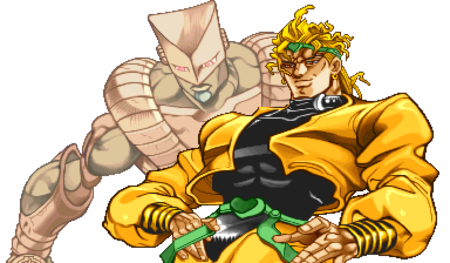 Defense Value Stand ON: 76 (Highest in the game)