Noriaki Kakyoin (花京院 典明 Kakyōin Noriaki), who is known here as New Kakyoin (恐怖を乗り越えた花京院 lit. "Kakyoin who overcame his fears"), is an alternative version of Kakyoin wearing sunglasses. This is due to an attack from N'Doul's stand Geb, which nearly made him blind. The community calls him New Kak or Nkak, alternatively meaning Neutered Kak. He is one of the six hidden characters, and he was released in the latest version of HFTF.

In JoJo's Bizarre Adventure: Heritage For The Future, New Kakyoin gains a simplified and restricted moveset in his Stand Off, while receiving an almost completely new one in Stand On. Difficulty wise he is harder to play than normal Kakyoin, due to his more noticeable flaws and higher execution requirement.

While he has worse tools at his disposal in general and his combos become much harder and shorter due to that, in Stand On he receives a Jedah/Morrigan dash, which makes him rise into the air at a roughly 65° angle. This gives him nigh unmatched movement speed and unpredictable behaviour, turning him into a generally more unique character.

If you like footsies, hard combos, having a lot of options, uniqueness and medium risk/high reward, then New Kakyoin is the character for you. 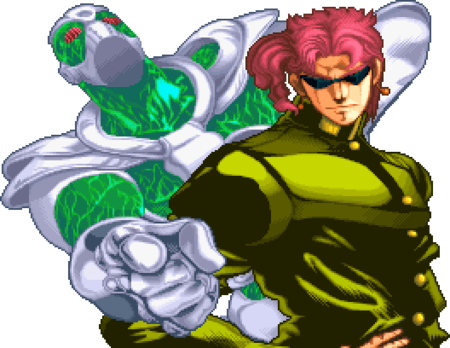 Prejump Stand OFF: 6 (5 if jumping diagonally)