The purpose of this page is to provide in-depth explanations for the various Patches created by SSBM Community Members to equalize the functionality of all Nintendo GameCube Controllers in the context of competitive SSBM.

C-Stick. SmashScope: Best Controller Calibration App for measuring the inputs of the GameCube Controller with extremely high degree of accuracy and a massively overclocked polling rate. Works best on a Wii because of the Wii-exclusive increased-polling-rate exploit. M'Overlay: Windowed App used for live-streaming input visualizers (for multiple GameCube games), and playing music for Rollback.

There are many mechanics at the player's disposal whose execution is controller-dependent. The GameCube Controller contains within it obsoleted technology that does not provide a uniform experience throughout the course of a unit's lifetime; Units also do not provide the same experience at identical wear levels. GameCube Controllers are not only inconsistent, but there are mechanics in SSBM that rely on the precise analog functionality of the controllers. The SSBM Competitive Community decided that there was a common desire to alter SSBM's code with the intention of diminishing the need for specific and rare GameCube Controllers to be able to compete on an even playing field.

The general trend for the earliest patches introduced was that they revolved strictly around the abilities of the theoretical best unmodified GameCube Controller, which would be an amalgam of any controllers that have manufacturing oddities which give them an advantage when it comes to the affected techniques. The discussion about the intentions of SSBM developer HAL Laboratories and in turn Masahiro Sakurai in terms of the accessibility to mechanics within SSBM seemed to be unimportant at the time. However, recent events such as the introduction of Rectangle Controllers and GameCube Controller Motherboard Replacements, much discourse is ongoing about the possibilities of negative consequences from further or previous changes to the game and the meta.

Universal Controller Fix (UCF) Version 0.8 is the current tournament-standard suite of controller-equalizing patches applied to SSBM in tournament-settings (Note: Nintendo-sponsored Tournaments mostly do not have any software patches applied to their games, as Nintendo does not support the modifying of their IPs). The individual patches that UCF v0.8 contains are listed below.

In SSBM, when a player's character is in a state during which they are allowed to initiate a Dash-Back (i.e. a Dash in the opposite direction that the character is facing) on the next frame (most often: "Wait"), the Character performs either a Fast or a Slow Turnaround animation. When the player moves the thumbstick, they are at the mercy of SSBM's polling; Assuming that on Frame 0, the character can Dash-Back, and the player begins to move the thumbstick towards the Dash zone on the

Since the window for a Dash-Back is a 1 Frame input, and the player simply cannot know if, at any given moment, they are safe to move their thumbstick towards the Smash-Turn zone in order to initiate a Dash-Back, the community decided that there was a problem that needed to be fixed.

On GameCube Controllers with a rare malfunction (Potentiometer Oddity Degradation Effect, or PODE), the Potentiometers on the

C-Stick are positioned in a way that does not reflect reality. If a player with one such rare controller performs a Dash-Back, their controller has a chance to "skip" the first poll outside of the Dead Zone, which could very well be in the Tilt-Turn zone. This in turn gives the player an effective 2 Frame window for Dash-Backs, instead of the actual window of 1 Frame.

Since the principle goal of UCF is to equalize the playing field among GameCube Controllers, it is appropriate to give every player a 2 Frame Dash-Back window. With this patch, any reasonably-well executed Dash-Back input should result in a successful Dash-Back.

Tilt-Turn Intent is coined as the application of math and statistical analysis that sought to solve the problems caused for players by giving them a more lenient window for performing Smash-Turns. This template for deducing the intentions of a given player's inputs is used by other patches that exist, but the UCF Dash-Back Fix was the first one to have it applied: 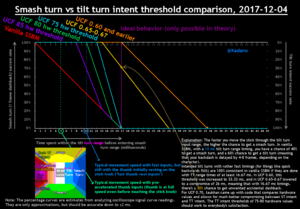