Mr. Game & Watch is currently ranked 19th in Melee's tier list. Mr. Game & Watch's positive attributes include extremely powerful killers that can last a long time and a slew of moderately effective special moves, one of which can give a OHKO. Surprisingly Mr. Game & Watch also has a great wavedash and an amazing fastfalling and traction attributes. However, Mr. Game & Watch's flaws are due to how he was translated to Melee; he has a bad approach due to his slow overall speed, and he generally is rather predictable. His high hitstun and low weight also make him an easy target for combos. Mr. Game & Watch also has the dubious distinction of being the only character in the game who cannot L-cancel most of his aerial attacks (only Fair and Dair cancellable); all of this gives him very poor matchups against a majority of the cast and define his weak points. 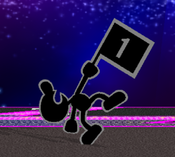 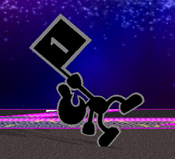 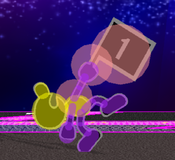 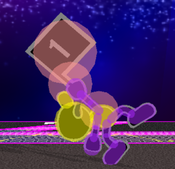 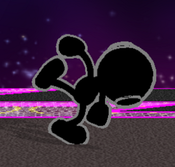 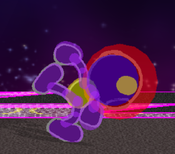 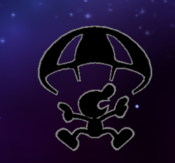 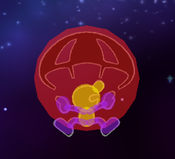 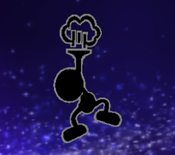 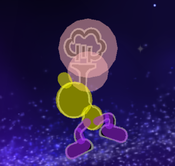 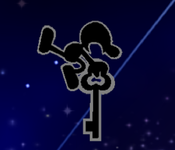 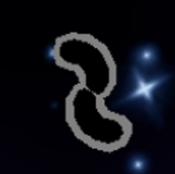 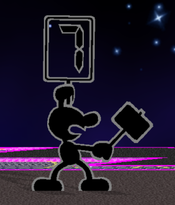 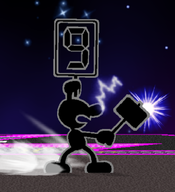 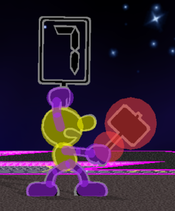 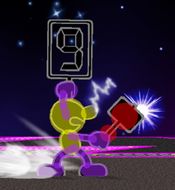 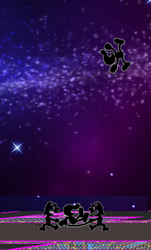 Show Hitboxes
Hide Hitboxes
Oil Panic
Aptly named - if you throw out this move, you should be panicking
4b
(AIR OK)

Mr. Game & Watch has a linear approach against most of the cast ranging from high to top tiers of melee. What most Game and watch players will look for to transition to an advantage state is baiting approaches to make his aerial tools (Fair and Dair) less obvious for the opponent. To make it easier, the game and watch player can have a convincing position to call out an approach from an opponent, then avoid the approaches with his decent movement options. Since Game and watch can move fast enough to fight well, it is generally the best idea to space his main approaching tool, which is forward air, and retreat to a safer range in order to avoid the opponent reaction, or continue another string of hits. This playstyle is commonly named "hit and run" in other fighting games.

Positioning and movement is essential to game and watch because it's his best ways to gain leverage against high and top tiers of melee.

Mr. Game & watch has the worst defensive game of melee in terms of viability. He can occasionally block small front facing hitboxes, but will suffer shield pokes in every single sets if normal shield is used. Light shield is his best bet to avoid devastating hits, but like mentioned before, it traps him in hit lag with a lot of pushback, which in consequences put him in an awkward state to respond and react to the opponent's next move.

The saving grace of Game and watch' defense is power shielding, which is very hard to constantly do in game despite having a straightforward concept. If used well, he can reflect Falco's lasers, counterattack shine if the spaces does another move, block Marth forward smash, falcon' knee, etc. The applications are infinite for a hard mechanic of the game, but this is what to keep in mind whenever you powershield.

All this description may show an impossible aspect of game and watch defense, but what truly makes his defensive game is, again, movement and positioning. Game and watch can't block every move and gets awkward interactions when blocking with light shield, but what can change is to prioritize movement so that the player can avoid these situations in the first place. While it will eventually happen that the game and watch will have to shield in, for example, corner stage situations, it is vastly rewarding to wavedash, dash, or throw attack away from/around the opponent's options. This will not fully stop the opponent from brute forcing their way into your defensive options, but for the smallest options that Game and watch can have, it is worth the try to tackle different situations with movement and positioning that makes the opponent think before acting.

This table shows the frame data for all of Game & Watch's non-special moves. Including shield advantage at different timings and cancels.