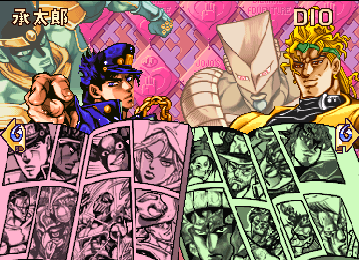 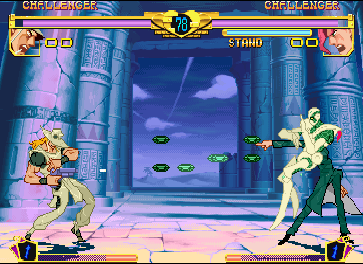 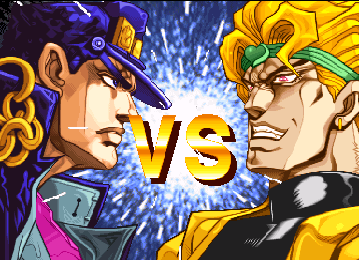 JoJo's Bizarre Adventure (ジョジョの奇妙な冒険 JoJo no Kimyō na Bōken) is the name commonly given to any one of the versions and ports of a fighting game developed by Capcom based on Part 3, Stardust Crusaders.

It was originally released in arcades in 1998 on the CPS-3 board; this version known outside Japan as JoJo's Venture. An updated version of the game was released in 1999 as JoJo's Bizarre Adventure: Heritage for the Future (ジョジョの奇妙な冒険 未来への遺産 JoJo no Kimyō na Bōken Mirai e no Isan), becoming the sixth and last game released for the board.

This game uses a unique version of the three button control scheme. Characters have a low, medium, and high attack. There's also the stand button (noted as S) that will either summon a characters stand or perform a special action depending on which character you use. Characters who can activate their stand with the stand button receive additional attacks and variations of their specials and those with an always active stand can use their stand to assist them.

Though the Dreamcast version is the more accurate port, the Playstation version is still a decent game in its own right.

Devo is quite unique among other Active Stands, as activating Stand ON will always put him into Remote Mode.

Characters with Passive Stand: Petshop, Shadow DIO, Rubber Soul, Hol Horse, Young Joseph, Khan, Black Polnareff, Mariah, Hoingo
Generally the weakest (with some exceptions) Stand Type, Passive Stand characters don't have a Stand ON mode and have no ways of negating Chip Damage, as well as lack mechanics similar to Custom Combos or Tandems.
The only unique thing that Passive characters possess, though, is the fact that their S button acts as a separate moves button, kind of like Drive Attacks from Blazblue series.