Vega (known as Balrog in Japan), or also known as Claw to avoid international confusion, is a narcissistic, Spanish ninja that works as M. Bison's personal bodyguard. In at least a of his appearances, most notably Super Turbo, he has proven to be a monster of a character with incredible buttons and gameplay that forces even the best players to stay on their toes in their approach against him (outside of SF4 and SF5, at least). In SVC, unfortunately, Vega suffers tremendously. He retains a few of his qualities like his great speed, good pokes, and somewhat unpredictable gameplay, however he's also a good example of a good character thrown into a game whose system completely hinders them. Vega's a charge character, but SVC - outside of Guile - is very unforgiving to charge characters when the likes of movement, zoning, and especially front step are prevalent. The system does nothing but make matters worse for Vega as he gains practically zero benefits while also having a pretty bad movelist to work with. On the bright side, you never have to worry about losing either his mask or claw.

Well... What can I say? You cannot cancel normal moves into those so... If you want to use them, use in mixup games. 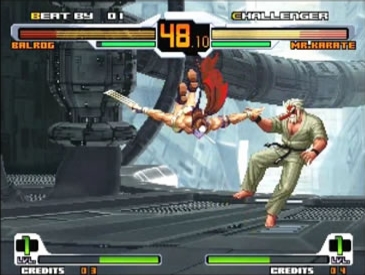 Claw is a charge character who likes to travel around the screen, you already know that. And he likes to be safe everytime too, with his Wall Leap crossups, with his Backslashes, and with his safe anti-air Special move. Claw, as you know, is a hit & run character, and this can make the match easier to win against some characters. His pokes are very nice too, you should use them. You have the Backslashes at your dispose, and you can even punish projectiles when you need. So travel around the screen, be safe, punish the opponent when you need, and plan your game everytime(If you're in the defense, think what you can do to help yourself, and if you're in the offense, think what you can do against the opponent, and now it's up to you. Good luck in your matches).

Some combos (Without MAXIMUM Mode)

Vega's combos can be used better on punish situations(That's because he needs to charge backwards/down-back to do more damage in the combos), and remember: Claw can't cancel normals into Command Moves(Even in MAXIMUM Mode). Some possible combos are below(If I forgot something or if you want to add a possible combo, put it here).

A simple hit & run combo to practice. And this is good because you don't need to punish your opponent to do this. Watch out, because the cl.LP whiffs on low crouching chars.

A kind of basic, but damaging combo. If you want to punish, you can use the cl.HP(Do the charge, press the HP button while standing, and then do the rest of the command).

A defensive combo with a defensive starter. This is nice to use when you need. And you can use while you're in midscreen too.

Claw's best punish combo, and it's the only way to combo with the Exceed (without counter hits and the MAXIMUM Mode). Can be the best way to spend your Exceed.

I don't know so many special strategies for Claw, so I will only add a MAXIMUM Mode combo here(You can add more if you know some).

Some Combos (With MAXIMUM Mode)
I could confirm only one combo, so... Dunno. Claw isn't combo friendly in this game(He can MAX cancel only 2 of his special moves).

Probably one of Claw's most damaging combos. Some guys said that this combo is possible with the Exceed instead of the Super on big characters, but I couldn't do it(Because I'm testing on a Keyboard only to see if it's easy to do), but I could MAX cancel the roll into the (Charge)db, f+HK, and connect this move into another (Charge)db, f+HK, and I can confirm that the first hit of the anti-air can juggle the opponent if canceled. The Super part is the most difficult. If you want to try with the Exceed, okay.