Shin is a hard-hitting power type character, and has the ability to Guard Crush any opponent. During the early days of the game's release he was considered the strongest character, but he has fallen greatly in the rankings as the other characters have become more and more developed while he has stayed mostly the same.

Between his command grab, 2B, and instant air dash B, Shin has very good okizeme, especially in the corner. However, his ability to apply continued pressure is lacking in comparison to other characters, and he has a very tough time getting out of bad situations. The simplicity and high damage of his combos, as well as his general ease of use make him a very good starter character, much like Kenshiro. Unfortunately, he lacks the same potential - of all characters, Shin has the hardest and least practical 100% combos. That being said, let us start this section off by listing Shin's main strengths and weaknesses.

Before diving right into the combos be sure to familiarize yourself with Shin's special/super moves and important normals. 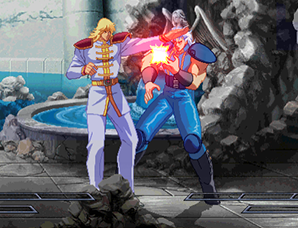 A quick jab to the face. Used in some combos as well as as an anti-air. 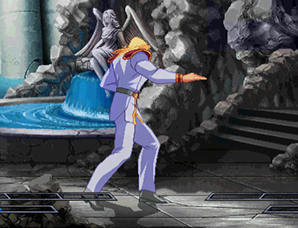 A straight jab. Used in some combos. 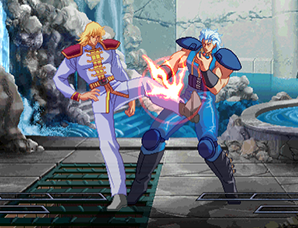 A lazy-looking kick. Used in some combos. 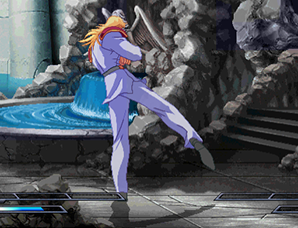 A low kick. Good for zoning, and also used in some combos. 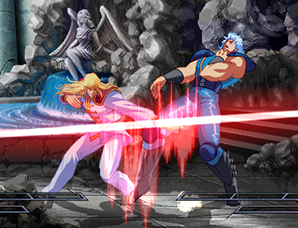 A strong low jab. Can chain into a Banishing Strike. Used in many combos.

A two-hit horizontal slash. Doesn't hit most crouching characters. Has great range which makes it useful for preventing opponents from jumping or for baiting an Air Recovery. Recovery is quite long so it is necessary to pick your spots carefully when using it.

A knee followed by a kick to the head. Used in many combos. 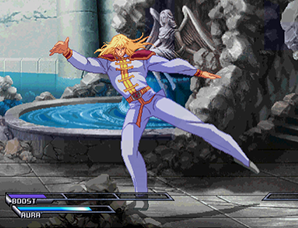 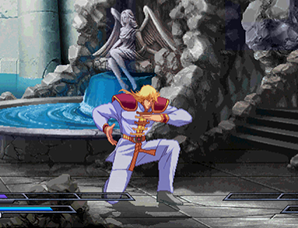 A short crouching elbow jab. Has less range than 2B, but the startup is quicker, making it useful for getting out of pressure. Also possible to use as an anti-air in some situations. 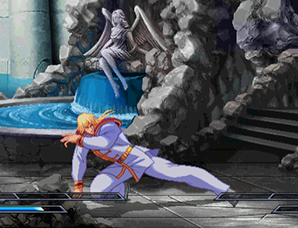 A very low crouching kick. Long range, quick startup, and advantage on guard. Loses to most other characters' 2Bs, but beats high-hitting moves like Toki's 2D. Can low profile moves such as Kenshiro's 623A/C and Juda's Dam super, as well as having fast enough recovery to block moves like Toki's Sekkatsukou when used as a meaty. One of Shin's most important normals. 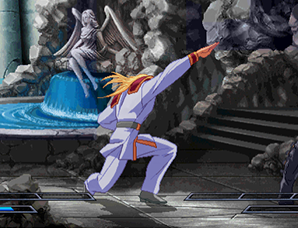 A strong upwards jab while crouching. Fairly slow startup limits its use as an anti-air. Mostly used in combos. 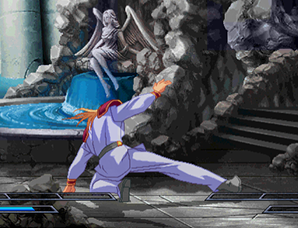 A long sweep kick. Fairly short range in comparison to other characters' 2Ds, but slightly longer than that of 2B. Hit causes the opponent to be knocked into the air. 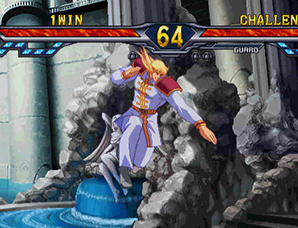 A downwards jab. Can be canceled into itself. Good air-to-air move. 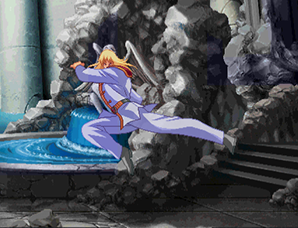 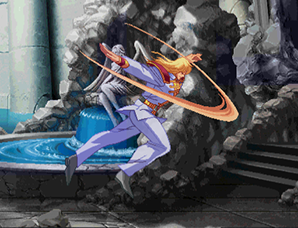 A two-handed downward chop. Used in some combos. 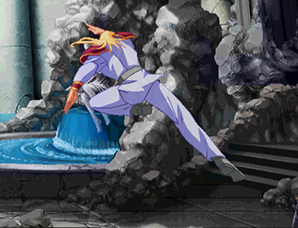 A strong downward kick. Useful in combos, and sometimes as an air-to-ground move.

A horizontal slicing punch. Hits overhead. Follow up possible with the use of Boost. Good to throw into your mixup every now and again.

A strong stomping kick. Hits low and takes off a star on Counter Hit. Mostly useless.

Shin throws his opponent to the ground then jabs them quickly several times. Follow up not possible. Mostly useless, especially since Shin has a great command grab.

Shin slaps his opponent to the ground, stomps on their body, and then kicks them away. Follow up not possible. Will catch Rei at the start of the round if he opens with a Grave Shoot. Situationally good to end rounds, as it gives a good chunk of meter on hit. 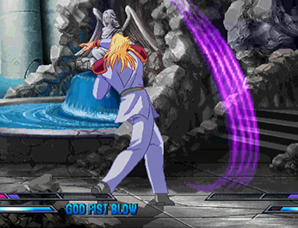 A slashing underhand chop. Not very reliable as an anti-air. Used in many combos.

Shin winds up then charges forward with a strong thrust. Very long reach, making this likely the best Heavy Strike in the game. That said its use is still limited to combos for the most part. 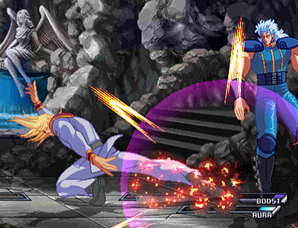 Shin performs a low sliding kick. Slow startup and recovery. Takes off a star on Counter Hit. Can be used to dodge some high-hitting moves. Overall it is very high-risk low-return move, and thus doesn't get much use. 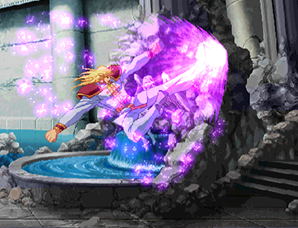 An air kick, similar to Kenshiro's Hieiken. The B land and air versions go diagonally upwards, while the D versions go horizontally across the screen. All versions take off a star on Counter Hit.

The land B version has invulnerability while rising, but not during startup, so cannot be used as a reversal. Causes wall bounce on hit, and it is possible to act in the air once the move has risen to it's peak. Misses all crouching characters except Heart. Very high return move, but often risky to use.

The land D version knocks the opponent into the air on normal hit, and causes wall bounce on Counter Hit. Hits overhead, but is generally never used because your opponent can easily get a guaranteed combo on you if they block it, which isn't that hard to do.

The air B version is mostly used as a combo ender. It does however hit overhead, so it is possible to use it after an air dash jump B as an alternative to landing and doing a 2B. This is quite hard to see, and effective to use every once in a while. Like the land D version, you will probably die if it is blocked, so caution is necessary when using it outside of combos.

The air D version is for the most part the same as the land D version. Has a few uses in some combos but otherwise is not very important. 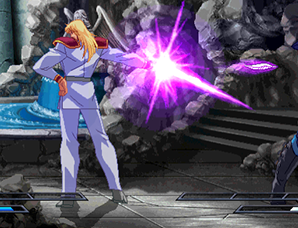 Shin strikes a pose and shoots feather-shaped blasts of power from his finger. Shoots two feathers upon executing the move, and one more for every time you press A. The feathers do no damage, but are unblockable and each hit adds to the opponent's unseen dizzy meter. Upon striking the opponent the word 'Faint' appears in a colored bubble, which ranges from yellow to red. The closer to red, the closer the opponent is to being dizzied - once it is fully red almost any hit will dizzy them. Feathers can also take out other projectiles and Juda's followers. This all sounds useful, but due to it's long recovery and the fact that your opponent can just run through your projectiles and hit you, this is a terrible move that you will only ever use by accident. 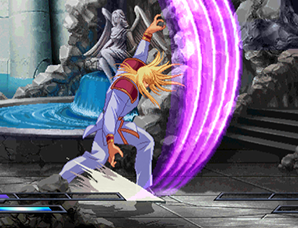 Shin does a big backhanded slash. Slow startup and long recovery, but has big range and upper-body invulnerability. Takes off one star on normal hit and two on Counter Hit. Can reflect most non-beam projectiles. Causes stun on grounded opponents. Mostly used in combos.

Shin rushes forwards a strikes his opponent rapidly. Takes off a star on Counter Hit. Slow startup, and doesn't hit crouching characters. The follow up move causes Shin to quickly turn around and attack his opponent while returning back to the side he started on. Takes a star on normal hit and two on Counter Hit. Used mostly in Banishing Strike combos.

Shin grabs his opponent, pokes them, then throws them away. A 4-frame startup command grab. Takes off one star, and follow up is possible. Very important part of Shin's mixup game.

Shin jumps up into the air and does a flip. The 236 version goes forwards, while the 214 version goes backwards. Can act midway through the jump. Mostly used in combos after a 2D. There is some invulnerability while jumping but it has no real use. It is also possible to triangle jump off of the wall if you come in contact with it while jumping, but once again this is completely useless.

Shin hits the ground an a big geyser of power shoots out. Takes off one star on normal hit and two on Counter hit. Has full invulnerability until execution, but the startup is quite slow at 12 frames. Mostly used in combos, and very sparingly as a reversal.

Shin charges up then rushes forward and stabs at his opponent rapidly. Can be charged by holding C. Charging increases the amount of hits and damage done - on some characters the max charge will instantly Guard Crush them if they block it. The last hit takes off one star, and the first hit will take off 2 stars on Counter Hit, for a total of 3 stars if the last hit connects. Has invulnerability, but the startup is even slower than that of Raishinshou. Does not see much use except in some obscure combos.

Shin slowly retreats, then jumps to his death. Shin begins the next round with his stars restored to full. This could have been a very useful move, but unfortunately the startup animation is extremely long, making it impossible to use for all practical purposes.

Shin does a high kick, then pokes his opponent to death while his underlings hold them. The kick move hits twice - the second hit must connect, or the FKO will fail.