Jagi is a tricky trap/zoning based character with a wide array of gimmicks and tools, running the gambit from one of the best supers in the game to practically unusable. Using gas puddles, oil barrels, and even rocks, Jagi restrict the opponents movement while pestering them with shotgun blasts and needles in order to get close and force damage. Unfortunately none of these tools are that effective, and his poor normals heavily affect his neutral game and make getting in or defending a heavy struggle.

Despite being hands down the weakest character in Hokuto no Ken, Jagi still remains quite popular - there are probably more Jagi users than there are Mamiya, Mr. Heart, and Thouther users. And why not? Aside from Jagi being awesome in general, nothing makes you looks cooler than beating a Toki user with him! However, the would-be Jagi user must overcome many hurdles to start to be able to win against the stronger characters, and many are not up to the task. A quick look at the matchup chart will give you an idea of just how bad poor Jagi has it.

Overall, Jagi is a character that requires superior player skills or extreme luck to have any chance at all against top tiers, and for the most part should be considered a character best used when you want to challenge yourself, embarrass your opponent, or just have a good time. That being said, let's cao this section off by listing Jagi's main strengths and weaknesses. 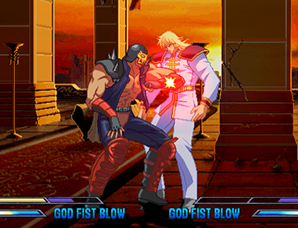 A quick elbow. Fast startup, can be canceled into itself. Effective against against airborne opponents. 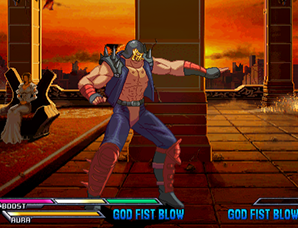 A straight jab. Slower than close A but has better range. Effective against against airborne opponents. 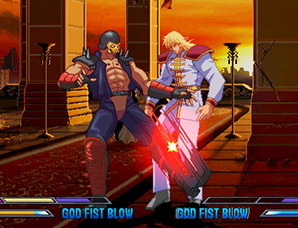 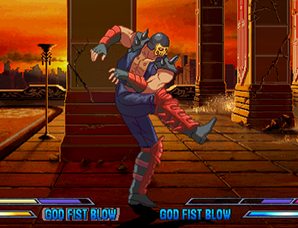 A short kick that looks more like a funky dance move than anything else. Its awful range makes it completely useless outside of combos. 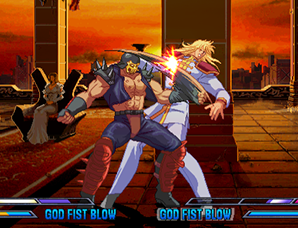 A hard backhand punch. Fairly slow but decent reach. Doesn't get much use outside of combos. 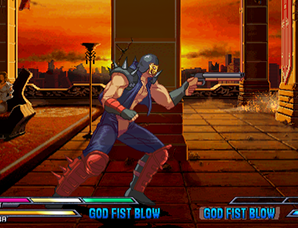 Jagi pistol-whips his opponent with his shotgun. Has good range and fairly long active time, making it alright for beating out air dash attacks. If you throw away your shotgun(done by taunting), this move will not come out at all. 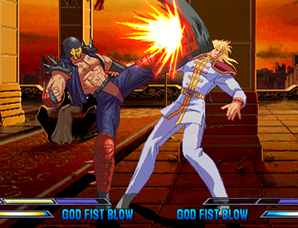 An overhead (in appearance only) dropkick. A decent anti-air, but loses to some moves like Rei's j.B. Can combo into a Banishing Strike. 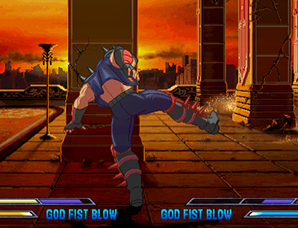 A low kick. Knocks the opponent into the air. Very important move for combos. 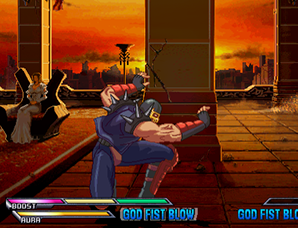 A crouching jab. Fast startup makes it good for getting out of pressure and starting combos. 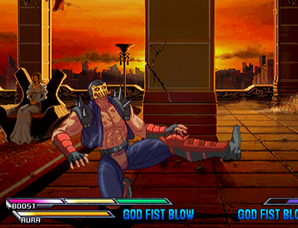 A low crouching kick. Comes out fast, has good range, and hits low. Can cancel into itself. Jagi's main combo starter. Beats out some character's low attacks, but as it's hitbox is fairly high it can't be used to counter Juda's land mines or Toki's teleports. 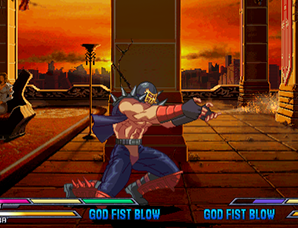 A low, two-handed thrust. Causes stun on Counter Hit, which allows for comboing into a Banishing Strike. Jagi's hitbox becomes quite small when using this move so it can beat out many normals with high hitboxes, like Kenshiro's D and Toki's 2D. Has fairly long recovery, but great return when you do connect. Definitely one of Jagi's best normals. 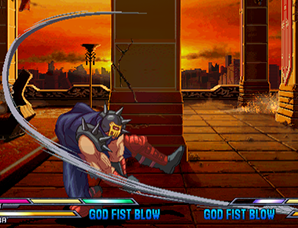 Jagi sweeps his opponents feet out from under them with a long piece of metal. Comes out fairly slow, but has great range and hits low. Often used at the end of an attack string as an alternative to a Grave Shoot. 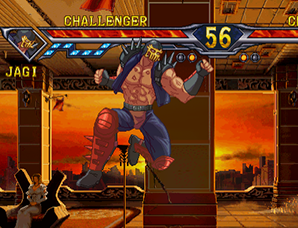 A jumping punch. Quick startup and cancelable into itself. One of the best air-to-air moves in the game. 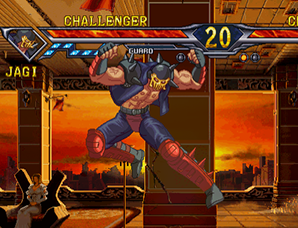 A downward kick while jumping. Mostly used in combos. 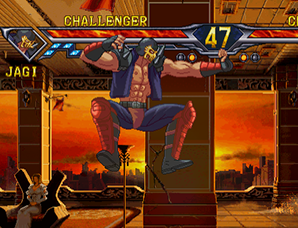 A straight palm while jumping. Knocks the opponent into the air, and causes wall bounce on Counter Hit. It's slow startup makes it inferior to jump A, but it is still useful in some situations. 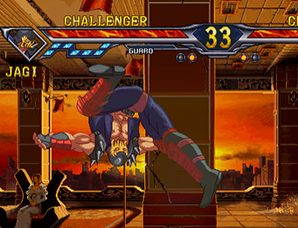 Jagi flips around in the air and kicks downwards. Quite weak and has fairly short range, but still Jagi's main air-to-ground move.

Some sort of crab-punch. Hits overhead and knocks the opponent down upon connecting. Follow up possible with Boost. 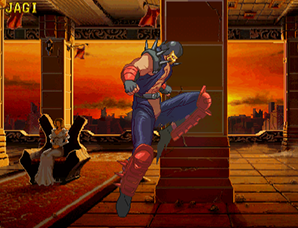 A jumping knee. Probably meant to be used as an anti-air, but even if you do connect with it you can't follow up with anything. Mostly useless. 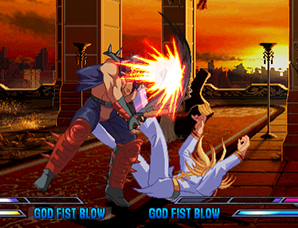 Jagi sits his opponent down in a chair, then bashes them over the head with his shotgun. Follow up possible in the corner. Can also follow up mid-screen with the use of Boost.

Jagi picks up his opponent and throws them up into the air. Comparatively long reach for a BD throw. Follow up possible.

Jagi magically pulls a giant stone pillar out of the ground and launches his opponent up into the air with it. Slow startup, and not usable in most combos. Hits overhead and has very long range. However, Jagi has a hitbox in the pillar so this move will lose to reversals even when done from a distance away.

Jagi winds up then lunges forward and headbutts his opponent. It's short range makes it not very useful outside of combos.

Jagi winds up and lets loose a powerful side kick. Important combo part. 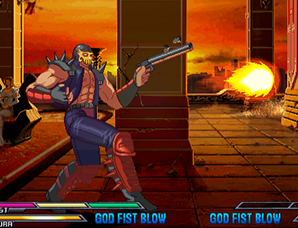 Jagi shoots a slow projectile from his shotgun. Has long recovery, and does about as much damage as a standing A. Can be used to light a drum can or enemy covered in gas on fire. Takes off one star on Counter Hit. 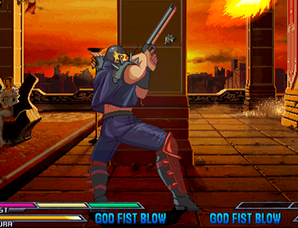 Shoots a projectile up into the air. Does more damage than the ground version. Mostly used to keep an opponent from jumping away when in the corner or as a psychic anti-air. Takes off one star on Counter Hit. 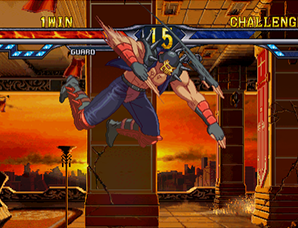 Jagi rapidly punches downward at his opponent. Takes off one star on Counter Hit. Used as a combo finisher or as a mixup option. The timing is quite difficult, but it is possible to link into a D upon landing if you successfully hit a grounded opponent.

Jagi steps back and winds up, then lunges forward. Max charge has the same effect as a max charged Banishing Strike. Can be canceled while charging by pressing A. Has very short invulnerability when Jagi steps backwards. Causes wall bounce on hit. Takes off one star on Counter Hit.

Jagi places a drum can where he is standing. Can place up to two at once. Makes a pillar of flame that burns for five seconds when hit with a match or shotgun shot. Pillar takes off one star on Counter Hit. Has fairly long recovery and no real effect until you light it on fire, making it less useful than Jagi's gasoline move. Used occasionally as a combo finisher in the corner.

Jagi throws a match about two character-lengths in front of him. Can be used to light a drum can, gasoline, or opponent on fire. Cannot be used to clash with other projectiles. Takes off one star on Counter Hit. Mostly used as a set with a drum can or gasoline.

Jagi dumps some gas on the ground, which stays there for 10 seconds. Opponents move very slowly over gasoline, and will often drop combos if they step over it during one. Can be lit on fire with a match. The pillar of flame it makes is slightly smaller than that of a drum can, and takes off one star on Counter Hit. Very useful for keeping opponents away.

Jagi slowly retreats backwards. Stops when you release A. Invulnerable after startup until just before stopping. If charged to the maximum, Jagi throws an unblockable needle that causes stun, but doesn't hit crouching opponents. The needle takes off one star on normal hit, and two on Counter Hit. Not very useful, but there are some rare spots where you can get a guaranteed hit with the needle, such as when Raoh uses his ground Goushouha.

Jagi chains a huge rock to his opponents leg. Hits low but has very slow startup. Invulnerable on startup. The opponents movement is slowed and they are unable to jump for five seconds. Takes off one star on normal hit, and two on Counter Hit. Can hit downed opponents, but the rock will not be attached in this case. Mostly used as a combo finisher or in some cases to bait Guard Cancels.

(While knocked down near shotgun) C (Uses 0.5 Bar Aura) 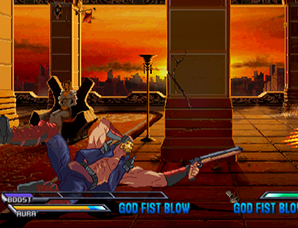 Jagi shoots his shotgun at his opponent while lying down. Can be done a maximum of four times in a row. Takes off a star on Counter Hit. Does about the same amount of damage as an anti-air shotgun shot. As you need to first taunt to throw your shotgun away, and then miraculously get knocked down right on top of it, this move is pretty much impossible to pull off, let alone use effectively.

Jagi throws a huge amount of gasoline at his opponent. Takes off one star on normal hit and two on Counter Hit. Opponent becomes covered in gas if they block or are hit by it, and can be lit on fire with a match or shotgun shot. If you do not hit the opponent with it the gas will stay on the ground and act like a big version of Jagi's gasoline move.

Jagi rushes forward and strikes his opponent rapidly. Has instant startup as well as startup invulnerability. Takes off one star on normal hit and two on Counter Hit. Pressing A, B, or C during the super causes Jagi to throw a needle diagonally into the air, straight forward, and diagonally down at the ground, respectively. While the needles don't do any damage, they are useful to keep the opponent in the air during certain combos. Recovery is quite long, but by throwing needles at the end of the super your opponent will generally not be able to get a guaranteed hit on you in cases where they were able to guard it. Thanks to the instant startup you can net a guaranteed Counter Hit after blocking many normal and special moves. This is one of the best supers in the game, and one of the few moves Jagi can really rely on.

"Ore no Na wo Ittemiro!"

A command grab that takes two full bars of Aura. Jagi grabs his opponent and demands they say his name. The opponent has to successfully choose "ジャギ(Jagi)" from a list of that contains two other similar looking names, such as "シャギ(Shagi)", "シャチ(Shachi)," etc. If they choose correctly, no damage is done and play resumes with both players able to act. If they choose incorrectly, or do not answer at all, Jagi hits them for a good chunk of damage. At this point it is possible to do a follow up with 236A for no extra cost, which forces the opponent to try to pick Jagi's name a second time. If they are unsuccessful again, they lose one star and are dizzied.

In cases where you think the first hit will kill the opponent, it is best not to use the follow up, as doing so will actually reset their health to one. If they guess correctly on the second part they will still be alive and able to come back and win the round.

A command grab only usable on Shin. Has a very long animation, which is a reenactment of the scene where Jagi corrupts Shin. Takes a star and drains Shin's Boost and Aura. Shin is able to mash the lever to reduce the amount of gauge he loses. Upon completion both players are able to act at about the same time. Mostly useless except as a gimmick.

Jagi smacks his opponent, then dumps gas all over the place and lights it up, exploding everything. Often misses even after successfully landing the first hit, making this one of the worst FKOs in the game.